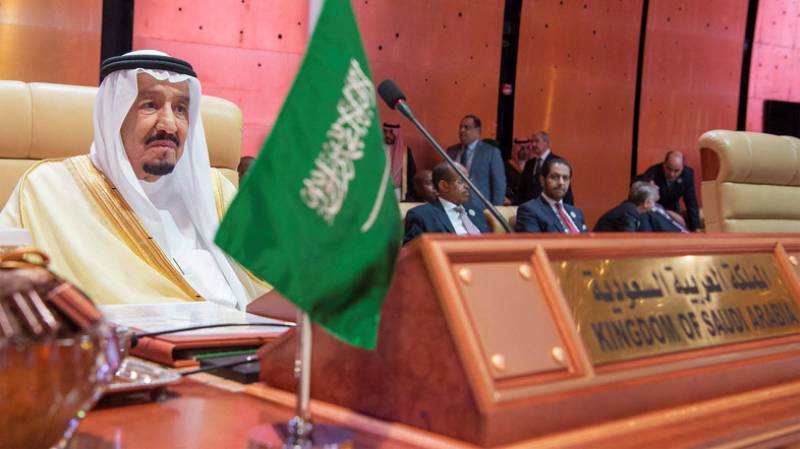 RIYADH -  Saudi Arabia’s King Salman heaped scorn on Kingdom's ideological rival Iran for its "blatant interference" in regional affairs, besides criticising the US over its recent decision to relocate embassy to Jerusalem.

King Salman's outburst came during the Arab summit which he dubbed 'Jerusalem summit' as seventeen heads of state from across the Arab world without Syrian President Bashar al-Assad gathered in Dhahran for the 29th Arab League summit on Sunday.

The 82-year-old monarch did not mention Syria in his address, however, focused on rivalries with Iran with clear-worded remarks.

"We renew our strong condemnation of Iran’s terrorist acts in the Arab region and reject its blatant interference in the affairs of Arab countries," the king asserted.

The ruler of the oil-rich kingdom also criticised US President Donald Trump’s controversial decision to recognise Jerusalem as Israel’s capital and shift the US embassy there.

"We reiterate our rejection of the US decision on Jerusalem. East Jerusalem is an integral part of the Palestinian territories." he added.

King  Salman bin Abdulaziz Al Saud said he had named this year’s meeting the Jerusalem summit so that 'the entire world knows Palestine and its people remain at the heart of Arab concerns'.

He also announced a $150 million donation for the maintenance of Islamic heritage in East Jerusalem.

The meeting opened only 24 hours after the US, UK and France launched a coordinated strike at Syrian capital for alleged use of chemical weapons by Bashar al Assad regime.

Though Saudi king asserted its stance on Palestine, his son and heir apparent Mohammed bin Salman divulged a different viewpoint on the issue, a few days ago.

In an interview with US magazine The Atlantic, Mohammad bin Salman, known by the initials MBS expressed that Israel had a ‘right’ to a homeland.

"I believe that each people, anywhere, has a right to live in their peaceful nation and Palestinians and the Israelis have the right to have their own land,” said the defacto leader of the state, home to Islam’s holiest sites.

The 32-year-old prince, who winded up his three week US tour, continued that ‘we have to have a peace agreement to assure the stability for everyone and to have normal relations.’