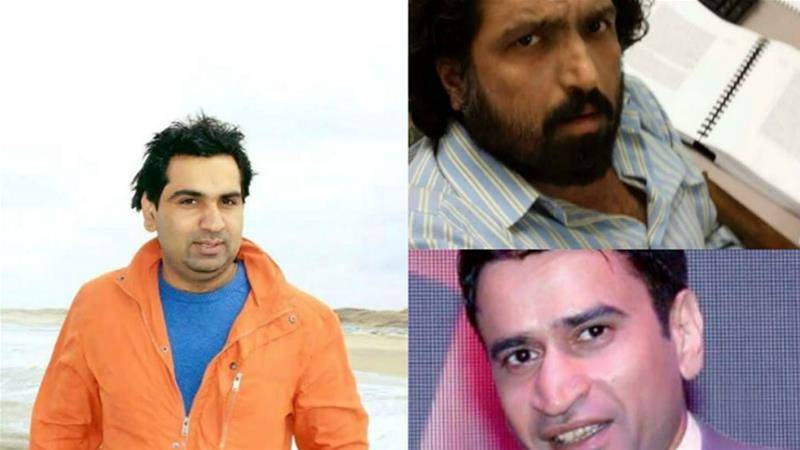 ISLAMABAD - An application for registering a blasphemy case against the four missing activists under the section 295-C has been filed in federal capital's I-9 police station.

The application submitted by Muhammad Tahir, the chairman of "Civil Society of Pakistan," alleges that the missing activists including Salman Haider and Waqas Goraya had been hosting Facebook pages with inflammatory and blasphemous content. 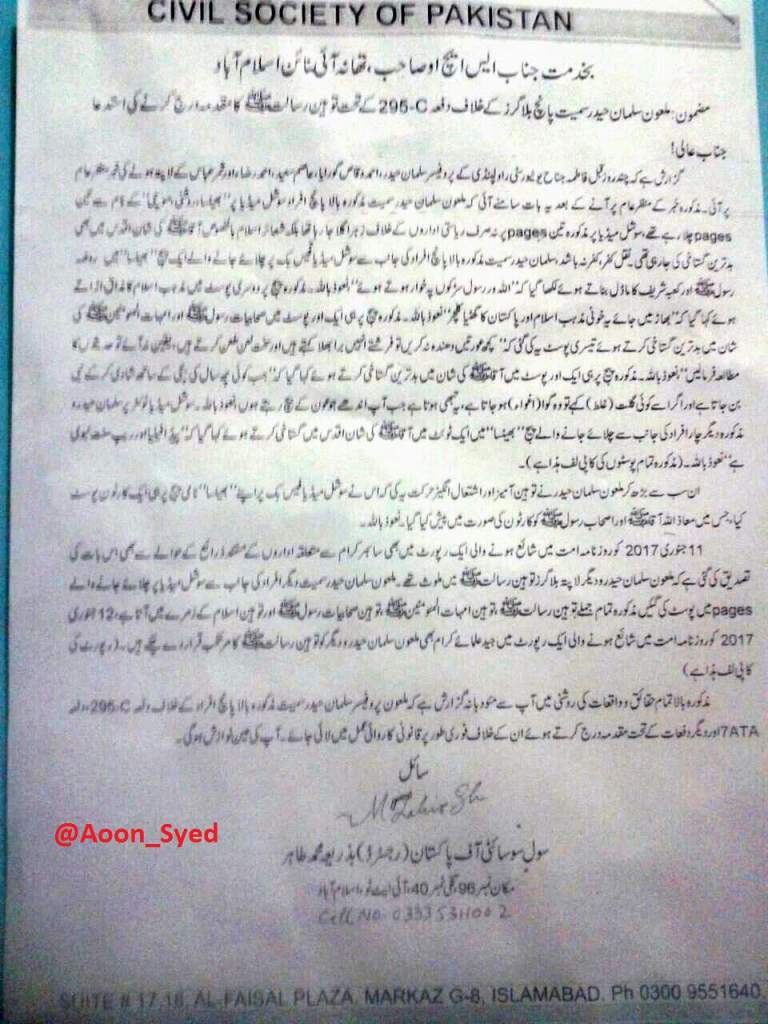 The petitioner has engaged advocate Tariq Asad for the case. Tariq Asad has also been an advocate for Lal Masjid's Maulvi Aziz against the former president Pervez Musharaf over Lal Masjid operation.

In his petition, Jibran had stated that "the page called Pakistan Defence which has a following of more than 7 million has accused these activists of blasphemy against the Quran and the Holy Prophet."

Jibran also urged the government to arrest the admins of ‘Pakistan Defence’, a Facebook forum which claims to be the “internet’s most authoritative source for news and discussions on Pakistan military."

“The government must arrest admins of ‘Pakistan Defence’ page and bring them to court for inciting violence against missing activists,” Jibran said on Twitter.

Talking to Daily Pakistan, Jibran Nasir said that "all we know is that bloggers and social media activists are missing and the page called  Bhensa was running blasphemous content."

"Now why are the missing activists being associated with Bhensa? What proof is there of this association? How did Pakistan Defence page get this intelligence? Does the page know who abducted these activists?" Jibran added.

Jibran maintained that people have a fixation with finding hidden agendas and imagining them when none can be found. "I was have been labelled pro-state and anti-state. At times I was called a Shia, then an Ahmadi and now an atheist. I was called closet "radical" as well when I criticised the extra-judicial killing of Malik Ishaq," Jibran said adding "tags and labels change depending on the causes I speak on and I am not the only one in Pakistan who suffers from this phenomenon. It appears it is too hard for people to comprehend the concept of rule of law and justice for all."

He said that the most troubling thing was that Pakistan Defence page which appears to support the military forces of Pakistan used the claims of one Abdullah Cheema on Orya Maqbool Jan's show as evidence of the missing activists committing blasphemy and being linked to him.

"Abdullah Cheema introduced himself as a member of a banned outfit Hizb ut-Tahrir which has a history of urging lower ranking military officers to stage a coup against generals like Pervez Musharraf, Ashfaq Kiyani and Raheel Sharif and establish self-styled Caliphate in Pakistan. For Hizb ut-Tahrir members to find support from pages like Pakistan Defence is not just ironic, it's tragic. It shows how misled and blinded we are with our misplaced notion of nationalism," Jibran held.

Talking to Daily Pakistan, Abdullah, a spokesperson for Civil Society of Pakistan, said that Facebook pages including "Bhensa" and "Roshni" were spreading hate speech under the garb of freedom of expression. "We firmly believe in freedom of expression but these blasphemous pages did not intend to initiate intellectual dialogues but deliberately posted hate and abuse against the prophet Muhammad (PBUH)," Abdullah held.

Abdullah further said that he could not comment on how it has been confirmed that the missing activists were the admins of the said pages. "I am not sure, but the board has taken the decision and similar claims were also made by the Facebook page called Pakistan Defence," he added.

Meanwhile, a campaign on social media by "Pakistan Defence" has called for blasphemy charges against Jibran Nasir and others who have been speaking against the alleged abductions. 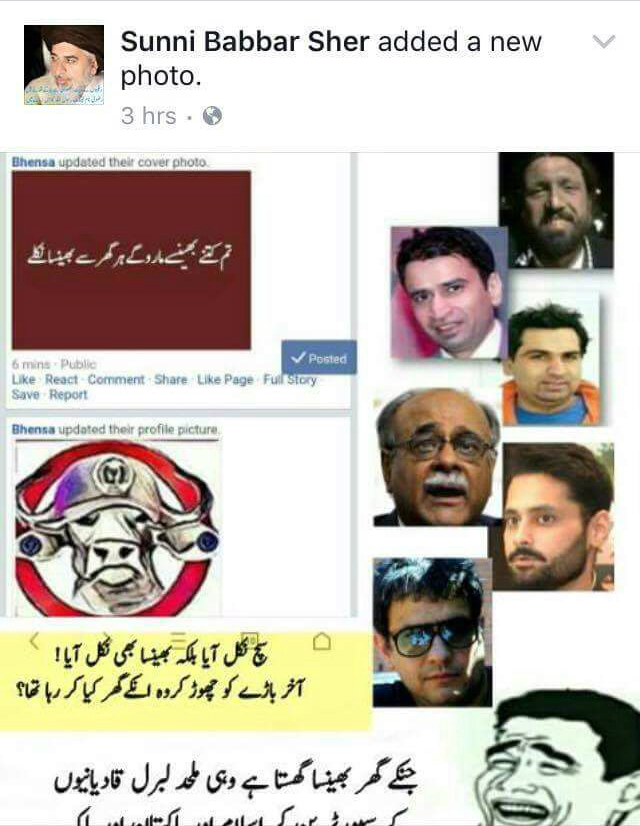 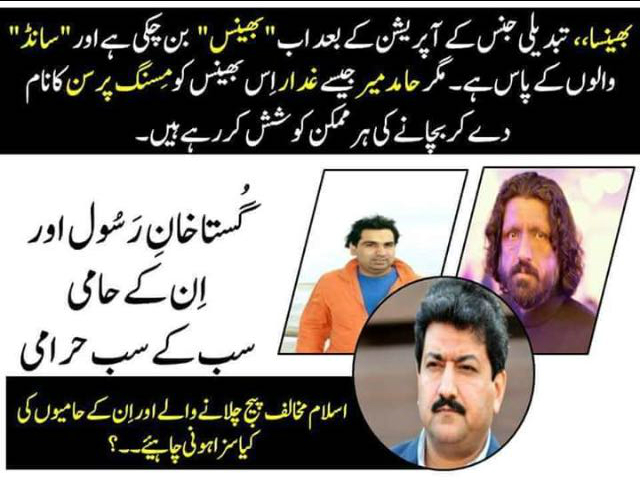 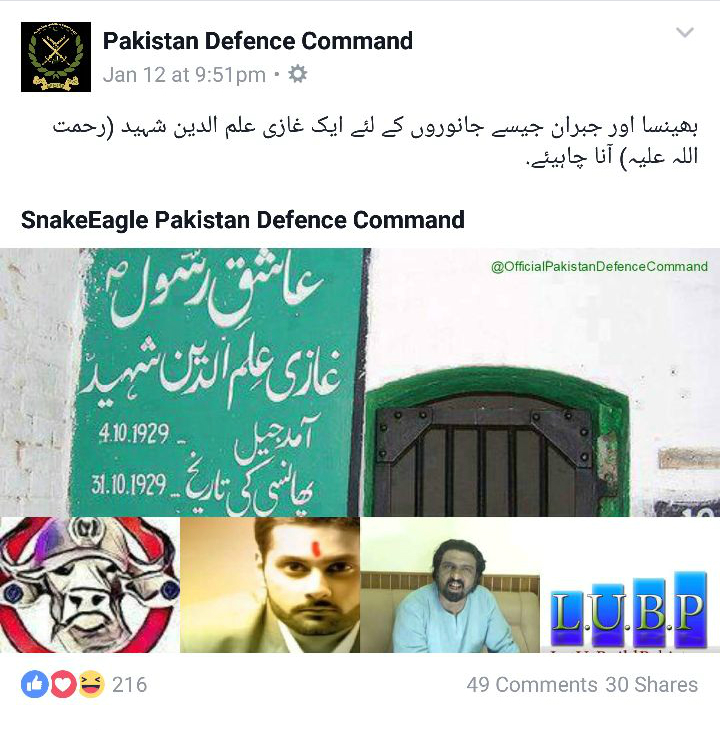