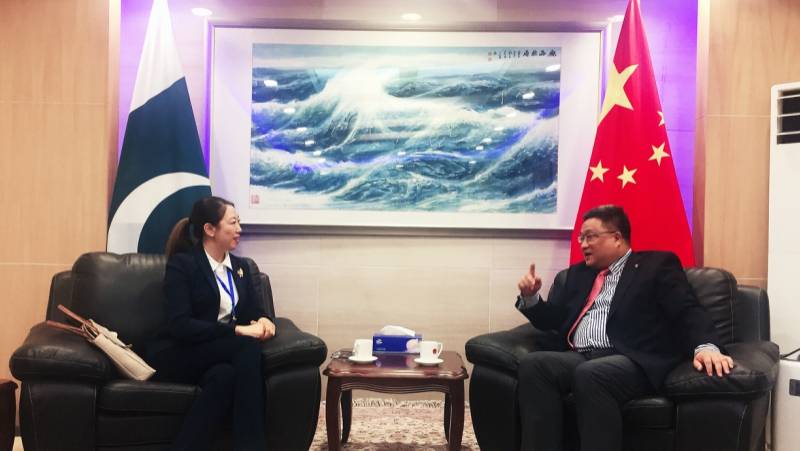 LAHORE – China’s second highly-ranked official in Lahore on Tuesday sat down with DailyPakistan in a clear-the-air meeting over Beijing’s flagship project China Pakistan Economic Corridor (CPEC), the ‘internment camps’ in Xinjiang Uighur Autonomous Region, and the Chinese growing influence in the African continent.

At the end of 2018, some Pakistanis and private radio stations had different views on the CPEC corridor project. They said that the CPEC project had increased Pakistan's financial burden and plunged Pakistan into a serious financial crisis. What do you think of this?

Responding to the question, Peng Zhengwu, Deputy Consul General of the Chinese Consulate General in Lahore, said the CPEC has 22 projects involving ports, transportation infrastructure, energy and industrial cooperation, with a total investment of 19 billion US dollars.

“At present, 11 projects have been completed and the remaining 11 projects are under construction. These 22 projects seem to be very large in amount. In fact, 18 projects are invested by China and 4 projects use preferential loans from China. Therefore, these projects have not increased Pakistan's financial burden. On the contrary, these projects are gradually being completed and put into operation, releasing their due economic benefits and bringing not only considerable economic income but also convenient urban life to Pakistan,” he told DailyPakistan.

“We have made a calculation that the CPEC has created more than 70,000 job opportunities and can drive Pakistan's economic growth by 1% to 2% every year. The early projects mainly focus on energy and infrastructure construction, which are the urgent needs of Pakistan at present,” he added.

Zhengwu said “the road Pakistan is currently taking is an inevitable stage in any country's industrialization process. We have provided some support in line with Pakistan's actual situation and demands based on the principle of mutual consultation, co-construction and sharing.

He shared that “our original intention is to help Pakistan move towards prosperity and strength. Therefore, it is totally untenable to say that the CPEC project will increase the financial burden of Pakistan.”

“As we all know, the United States is China's largest debtor country, but the United States seldom complains about its financial burden. As far as the history of China's development is concerned, in the early days after the founding of the People's Republic of China, we received a great deal of assistance from the Soviet Union, Japan and some friendly countries, which enabled us to develop and successfully repay our debts through development. We are grateful to these friendly countries so far.”

What is China's view and attitude towards CEPC in the future?

Highlighting the all-weather strategic partnership between two Asian neighbours, Zhengwu said: “Our original intention is to help Pakistan to prosper. The CPEC is the belt and road initiative's flagship project and we hope that the project will be completed as soon as possible to benefit the Pakistani people.”

“We also hope that through these projects, China and Pakistan can build a community of destiny as soon as possible and join hands to lead the world. In 2019, we will focus more on people's livelihood projects, such as education, cultural exchanges, youth exchanges and other areas where the two sides have reached some preliminary intentions.”

China supports Pakistan's agricultural exports. But will it give some corresponding preferential policies to China's imports?

“We will provide Pakistan with some preferential policies and favourable conditions in this regard while trying our best to help Pakistan's agricultural products including fruits, cane sugar and rice enter the Chinese market at a lower cost. The two sides are discussing specific policies,” the deputy consul general replied. 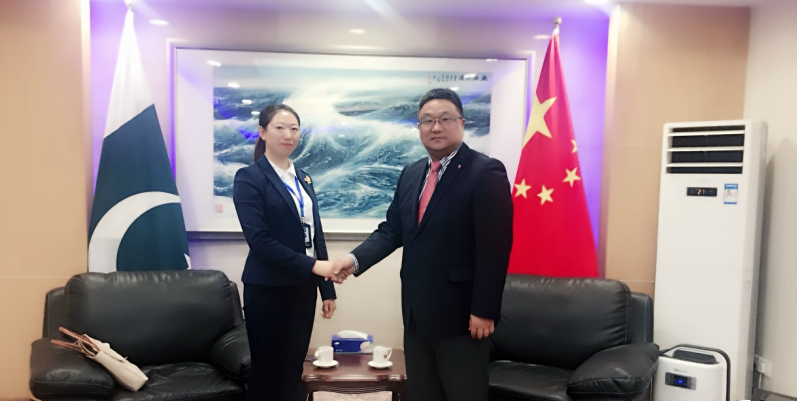 ‘Re-education or internment camps for Uighurs’

Many Pakistanis are worried about the treatment of Chinese Uighurs. They say there are about 1 million people in detention camps. Is this the propaganda of western media? What is the truth?

To this question, Mr. Zhengwu said he had noticed that many people in Pakistan criticise " media politics" and " media economics", that is, some media hope to guide national policies and economic trends through false reports.

“Some Pakistanis would be worried about Xinjiang Uyghur, the actual situation is just the opposite. Many Pakistanis I contacted did not mention these issues to me. Not long ago, Pakistan's ambassador to China followed the delegation to Xinjiang. He [the Pakistani envoy] was very happy and satisfied with the current situation in Xinjiang. What he saw was that the Chinese government did help Xinjiang Uygur ethnic minorities to develop their economy.

Moreover, he added, Xinjiang was very stable and the people lived happily, which was not what the West said.

“The Chinese government is consistent with the Pakistani government in its attitude towards religious extremism, separatism and terrorism and resolutely combats them. At the same time, we absolutely support the economic development of Uyghur people. We have aided with counterpart cities.

“Many places in China, such as Guangdong, Shanghai and Jiangsu, have aided with counterpart aid different cities and regions in Xinjiang to support their development. At present, some people in Xinjiang are affected by extreme thoughts. The government provides some help to them to learn law, mandarin and skills, to get out of extreme thoughts, and to find jobs in society and realize family harmony and economic development,” he explained.

Mr. Zhengwu went on to say that now many mainland enterprises set up factories in Xinjiang. “These factories need a large number of mature technicians in Xinjiang. What the government is doing now is to help train Xinjiang Uygur people to master a labour skill and be able to do the work in the factories. Their economic income has improved and they can have a deeper understanding of extreme thoughts and resist them more consciously, thus safeguarding the overall situation of national unity.

He also shared his experience during a trip to Xinjiang in August last year where he visited several places in Xinjiang, from northern Xinjiang to southern Xinjiang. “My personal experience is that Xinjiang is a very beautiful, very safe and very promising place. The local people all feel that Xinjiang is more stable than before and the investment environment is good for doing business. We also welcome more people to take a look at Xinjiang and take a walk. Don't listen to one side of some media and don't be bewitched by such ‘media politics’ or ‘media economics’,” he concluded.

About the future development of China's relations with countries in Africa and the Middle East, the deputy consul general in Pakistan said that China and Africa held the Beijing Summit of the China - Africa Cooperation Forum last year.

“China and Africa are traditionally friendly. Every year we have many projects to support Africa's development. At present, the projects are progressing very smoothly, especially the cooperation between China and Kenya has become a symbol of China - Africa cooperation.

“We also hope that other countries can take the express train of China's development to achieve prosperity and progress together. Relations with Middle East countries are also one of our diplomatic priorities,” he detailed.

CPEC is the belt and road initiative's flagship project in South Asia. Will this model be replicated in Africa?

“At the same time, we respect the development wishes of these countries and are willing to provide assistance within our capabilities. Our ultimate goal is to realise what President Xi Jinping said about building a community of human destiny,” he affirmed.

Commenting on Pakistan's contribution to the security of Chinese personnel, especially during the recent attack on the Chinese consulate in Karachi, Mr. Zhengwu expressed his gratitude towards Pakistan for its massive security investment in the CPEC project.

“I believe that neither of us would like to see such an incident as Karachi. This incident also reflects that Pakistan cannot afford to take terrorism lightly. We also need both sides to work together to prevent similar incidents from happening and to strike at terrorists relentlessly and resolutely,” he told DailyPakistan.

What are your expectations for the friendship between China and Pakistan in 2019?

“Let's talk about 2018. It was an extraordinary year with many challenges. China and Pakistan have come together. On the one hand, we should strengthen high-level exchanges between the two countries in 2019, mainly by taking advantage of the second the belt and road initiative Cooperation Summit Forum,” Mr. Zhengwu said.

“We should also take the BRI as an opportunity to speed up our bilateral cooperation in other fields, especially in the humanities. I think 2019 is a year of opportunities for both of us [China and Pakistan]. We should resist all kinds of pressures and challenges, raise the relationship between the two sides to a higher level, do more practical things and better benefit the people of both sides. I have great confidence in this.”

In the end, the vice-consul general shared that China is very willing to help Pakistan develop.

“At present, Pakistan's investment environment is not particularly good, the policy is not particularly preferential, the tax rate is on the one hand, and some government agencies are too inefficient. We hope Pakistan and China will work together to improve the investment environment so that Chinese enterprises and businessmen can realise their desire to help Pakistan's economic development

“As Pakistan’s friends, we present the facts fairly and objectively and hope that the two countries will develop and prosper together,” he concluded.

The CPEC, which connects Gwadar Port in Balochistan with China’s Xinjiang province, is the flagship project of Chinese President Xi Jinping’s ambitious Belt and Road Initiative (BRI). The $60 billion-plus economic corridor, launched in 2015, is a planned network of roads, railways and energy projects.