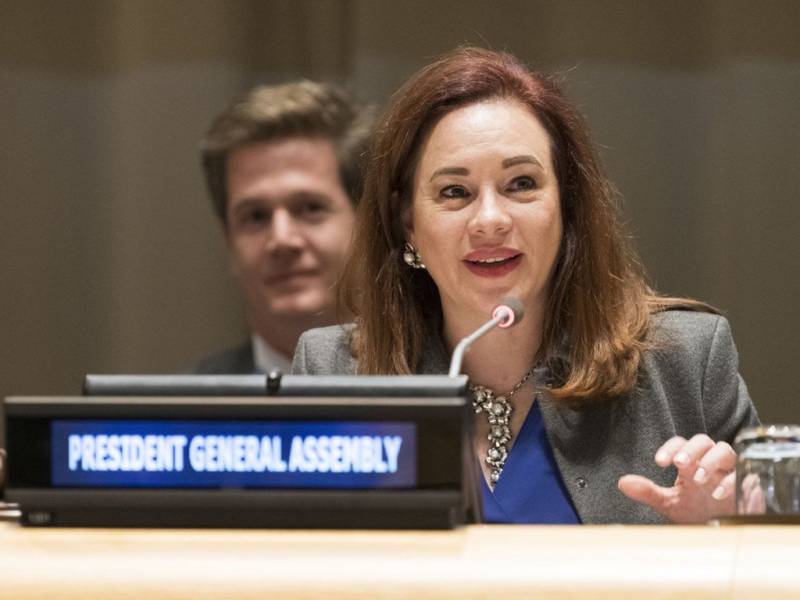 UNITED NATIONS – The UN General Assembly President, Maria Fernanda Espinosa, is looking forward to her 5-day visit to Pakistan, which begins on Friday, during which she will talk with Prime Minister Imran Khan and other Pakistani leaders on global and regional issues.

"The President of the General Assembly looks forward to strengthening the ties between Pakistan and the UN, promoting multilateralism and continuing her work with Pakistan on the priorities for the 73rd Session of the General Assembly," Spokesperson Monica Grayley said on January 11 when she announced Ms. Espinosa's January 18-22 visit to Pakistan, her first to the Asia-Pacific region.

It will be also the first visit by the senior UN leadership to Pakistan since the advent of the government led by Prime Minister Imran Khan.

@UN_PGA Ms. María Fernanda Espinosa will visit Pakistan from the 18 to 22 January. She will meet with Prime Minister, President, Foreign Minister, as well as representatives of the UN and of civil society and women’s organisations. https://t.co/XhkcDNNdPs pic.twitter.com/ns8S7s3Zfp

Pakistan's Ambassador to the United Nations, Maleeha Lodhi, had a detailed meeting with the 193-member Assembly's president last week to finalize her visit.

"Our leadership looks forward to having wide-ranging discussions with Madam Espinosa on global and regional issues," the Pakistani envoy said afterwards.

Pakistan’s Permanent Representative to the UN Dr @LodhiMaleeha announcing the upcoming visit of the President of the @UN_PGA Ms María Fernanda Espinosa from January 18-22, 2019 to Pakistan. It is the first time in 8 years that a UN PGA President will be visiting 🇵🇰 pic.twitter.com/tQypL7vC9v

In the course of the talks in Islamabad, she added, the General Assembly president will be briefed on the situation in the Indian occupied Kashmir.

During her visit to Pakistan, the Assembly president, who is also foreign minister of Ecuador, will, besides the prime minister, meet with President Dr. Arif Alvi and Foreign Minister Shah Mahmood Qureshi, as well as representatives of the UN and of civil society.

The Assembly president's delegation includes her Chef de Cabinet, a senior advisor, a communication specialist, her coordination officer and her personal assistant.

Espinosa, 54, is only the fourth female President of the UN General Assembly in its 73-year history.

Ambassador Lodhi said President Espinosa will also have an opportunity to meet with women Parliamentarians in Pakistan and visit the Centre for International Peace and Stability, which is Pakistan's Peacekeeping Training Centre.

In those capacities she coordinated the Sectorial Council on Foreign Policy and Promotion, which includes the Ministries of Tourism, Culture and Heritage, Foreign Trade, and the Environment.

Espinosa, also served as Ecuador's Permanent Representative to the United Nations, and was Chair of the Group of 77 and China until January 2018. Spokesperson Grayley said that Espinosa believes that key world issues require multilateral solutions.

The threat to multilateralism as witnessed across the globe drew calls for renewed commitment to a rules-based global order. UN Secretary General Antonio Guterres, addressing world leaders at the start of the high-level General Debate in September last year, had warned that the world is suffering from a bad case of “Trust Deficit Disorder” where polarization is on the rise and cooperation among nations is more difficult.

The UN chief underscored that challenges across the globe are growing outwards, while many people are turning inwards. “Multilateralism is under fire precisely when we need it most,” he had said.