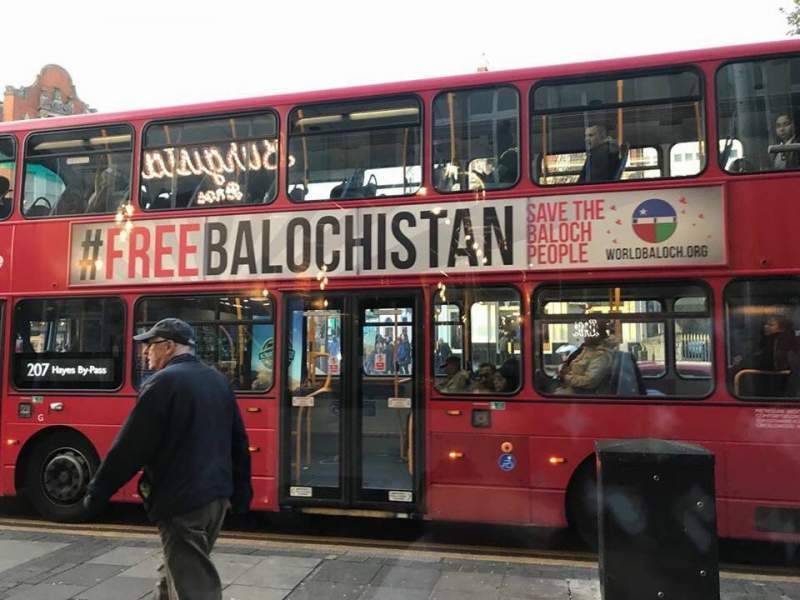 LONDON - A second anti-Pakistan campaign has been spotted in streets of London days after the UK authorities curbed the same move by a separatist group.

Media reports suggest more than 100 buses are carrying advertisement posters that say "Free Balochistan", "Save The Baloch People" and "Stop Enforced Disappearances" in the city.

On November 2, posters spotted on cabs in London emblazoned with ‘Free Balochistan’ slogans and the matter was raised by Pakistan High Commission with the Transport for London (TfL).

Following the complaint, the TfL issued orders to remove such slogans immediately from the cabs, besides ordering an investigation into the matter.

LONDON – Authorities in London have ordered the immediate removal of anti-Pakistan advertisement from cabs and ...

But the action could not restrain anti-Pakistan elements from carrying out the second phase of their advertisement on buses.

The Pakistani authorities once again contacted the TfL regarding the campaign. Thereafter, the UK officials launched action and posters from 35 buses had been removed on Wednesday, while others will be removed today (Thursday).

Promising an inquiry, the officials said that they were not aware of that advertisement has also been booked for the buses when it took action against black cabs.

The TfL revised the statement, which was given against campaign on cabs, that the advertisement campaign was against the law set by the government regarding the advertising.

The campaigns on cabs and buses have been launched by a group named World Baloch Organisation (WBO). Another was also run on billboards of London in which picture of Bhawal Mengal also appeared along with the posters.

Mengal is the nephew of exiled Baloch leader Mehran Marri but it is not confirmed whether he is behind the malicious activities.

The campaigns surfaced in London are similar to Geneva in Switzerland where separatist leaders displayed posters titled, “Free Baluchistan” in the area around Rue de Ferney in Grace Sacconex.