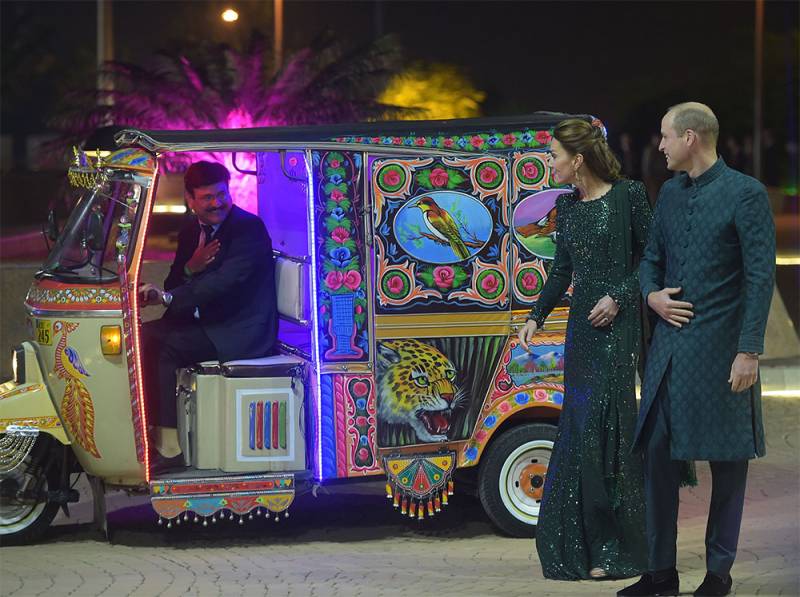 ISLAMABAD - The Duke and Duchess of Cambridge Prince William and Kate Middleton were dazzling in eastern wear at the special reception hosted by the British High Commissioner to Pakistan here on Tuesday (yesterday).

The Duchess of Cambridge was a vision in glittering green dress caught the eyeballs of the beholders as she stepped out of the auto Rickshaw along with  Prince William who was donned in a traditional sherwani suit for the event at the Pakistan Monument.

At the reception, which was arranged to showcase the best of Pakistani culture, the duke recognised the unmatched sacrifices of the countrymen, saying: "For a country so young, Pakistan has endured many hardships, with countless lives lost.

Tonight I want to pay tribute to all those who have endured such sacrifice and helped to build the country that we see today."

Let's have a look at some of the amazing pictures from last night's reception:

ISLAMABAD - Kate Middleton, the Duchess of Cambridge, is winning the hearts of Pakistanis during her maiden visit of ...

Kate was looking gorgeous as she stepped out of the royal car wearing a stunning blue traditional kurta and a pair of nude heels for a visit to the Islamabad Model College for Girls in the capital, where the duo spent good time touring classrooms and posing for a group picture with some of the young students.