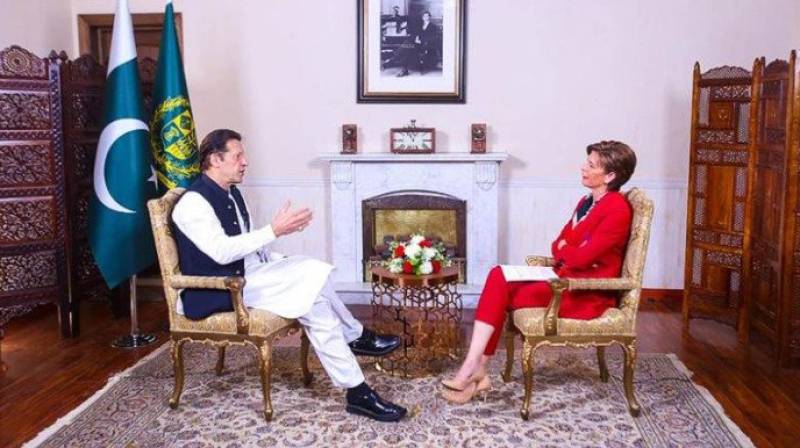 ISLAMABAD – Prime Minister Imran, in an exclusive interview, mentioned US reluctance to reach out to Pakistan as he had not spoken to US President Joe Biden since the collapse of the western-backed Afghan government.

In an interview with CNN program Connect the World on Wednesday, which was hosted by Becky Anderson, PM termed Biden a ‘busy man’ saying he should be asked why he is too busy to call, he responded when asked to confirm that Biden hadn't called Khan since coming into office.

On Monday, US State Secretary Antony Blinken said the US would reassess its ties with Pakistan following the withdrawal. He told Congress during a House Foreign Affairs Committee hearing that Pakistan has a multiplicity of interests some that are in conflict with ours. Khan called such comments 'ignorant', telling the CNN journalist that 'I have never heard such ignorance'.

PM, who was speaking from his residence in the country’s federal capital, said he would now like to see a single-dimensional relationship with the US as we will not fight after being paid from the western allies. “We want a normal relationship”, he added.

Khan also emphasized that Pakistan suffered greatly after siding with the US in the war in Afghanistan after 9/11, saying ‘at one point, there were 50 militant groups attacking our government’.

We joined the US against the Soviets and trained the Mujahideen to do jihad against foreign occupation in Afghanistan in the ’80s, he said while adding that the same ‘mujahideen's acts were deemed terrorism’ following the US invasion of Afghanistan.

Khan negated the idea of allying with the US while recalling the US invasion in the neighboring country following the 9/11 attacks. “I would never have done that, If I was the prime minister at that time”, he added.

As Biden’s hopes of keeping the Afghan Taliban in check will rely heavily on Pakistan, Khan mentioned Pashtun nationalism which kicked in the entire tribal belt of Pashtuns on the Pakistani side following the US invasion.

“So the jihadis turned against us, the Pashtuns turned against us, and the more we tried military operations in civilian areas, the more collateral damage [took place]”, he mentioned while explaining the consequences of hosting US bases fearing it might lead to his country being targeted in revenge attacks by the other side of the border.

Prime Minister said ‘It is complete ignorance’, when asked about the reasons for the trust deficit between the West and the South Asian country. Adding that, “Americans did not understand what the Haqqani network was, which he described as a Pashtun tribe living in Afghanistan”.

Responding to allegations that Pakistan's intelligence was funding and supporting the insurgents in Afghanistan via the Haqqani network, Khan mentioned the total budget of Pakistan – which is $50 billion for 220 million people.

“Did we have the capacity to fund another war when we can barely meet our own expenses?” he said while questioning the accusation hurled from western countries. Khan termed Pakistan’s relationship with the US during the occupation of Afghanistan as a ‘terrible’ one saying we were paid some $20 billion for being used as a hired gun, he said while reiterating that the country suffered $150 billion.

Afghanistan can never be controlled from outside

Prime Minister said that Afghanistan could not be controlled by outside forces and urged the world to engage the Taliban by incentivising them on their pledges related to inclusive government and women’s rights.

"No puppet government in Afghanistan is supported by the people. So rather than sitting here and thinking that we can control them, we should incentivise them. Because Afghanistan, this current government, clearly feels that without international aid and help, they will not be able to stop this crisis. So we should push them in the right direction," Khan told CNN.

ISLAMABAD – Prime Minister Imran Khan Wednesday said that Afghanistan could not be controlled by outside forces ...