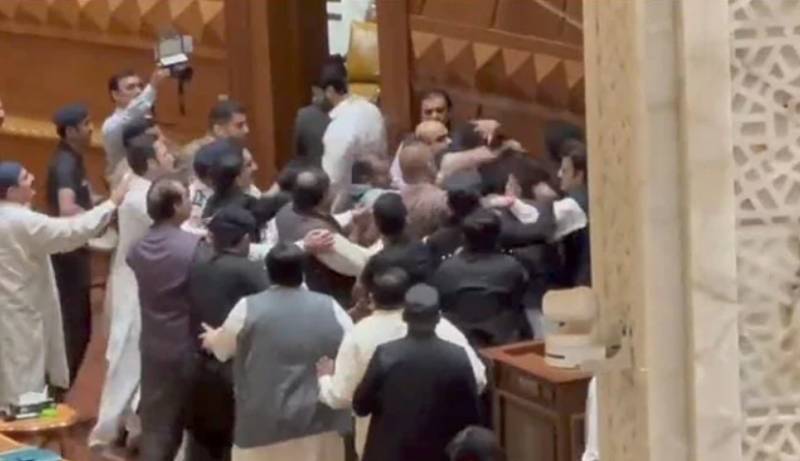 LAHORE – Police in the country’s second-largest city Lahore have registered the First Information Report (FIR) a day after Punjab Assembly turned into a battlefield as the power struggle between political parties turned violent.

A case has been lodged under charges of attempted murder, interfering in discharging government duty, and vandalism against unknown members after provincial lawmakers manhandled Deputy Speaker Dost Mohammad Mazari as he arrived to chair the session for the election of the Chief Minister.

It also mentioned that Mazari was escorted with great difficulty as aggressors violated the sanctity of the house and made an attempt on the life of the deputy speaker,

Meanwhile, outgoing Punjab Assembly Speaker and PTI candidate for the coveted post of Punjab chief minister, Pervaiz Elahi, has approached cops for registration of a case as he alleged that PML-N’s Rana Mashood, attacked him on directions of CM elect Hamza Shahbaz.

However, the cops told the PML-Q leader to get his medico-legal examination done. The case will be lodged after the medical report is received, law enforcers said.

LAHORE – Amid the hullabaloo and violence, several members of the Punjab Assembly sustained injuries including ...

Elahi also blamed the scuffle on the cops accompanying Mazari for creating a ruckus in the house by allegedly assaulting the members of the government.