Zardari sees no future of Sharifs in politics 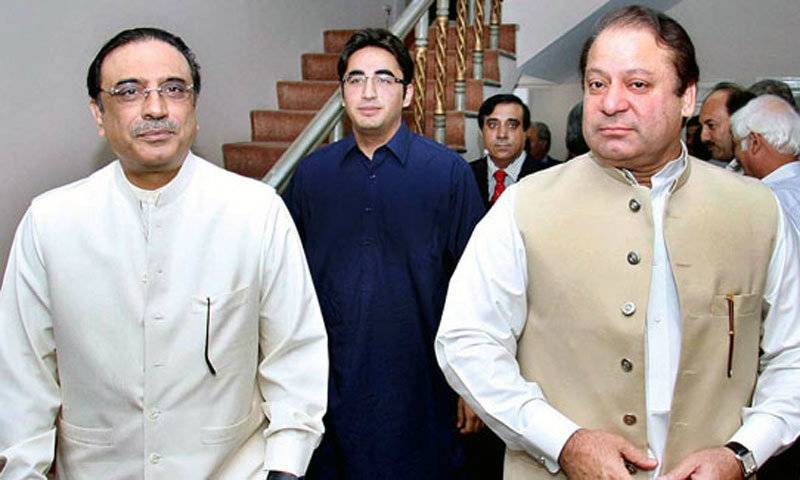 LAHORE - Former president Asif Ali Zardari and Pakistan People’s Party chairperson Bilawal Bhutto Zardari on Thursday denied providing a political support to the Nawaz Sharif-government in the past, calling it a ‘public misconception’.

“There is a misconception among people that we had earlier extended support to Nawaz Sharif. This is not true as we had only supported the government,” said Zardari, who was flanked by his son during a press conference at Bilawal House in Lahore.

The PPP co-chairman said he was with the democracy and wanted to see it evolved in the country.

Zardari added he doesn’t see Sharif family having a future in politics. He claimed there was no political prisoner in his government. Last time we stood by government, and saved democracy, he added.

"This time there is no threat to democracy at the moment but to Nawaz Sharif."

However, he said in politics there is no final word.  “Even a brother would not pick a phone call if you all him after a four-year of gap,” Zardari continued.

Speaking about the PTI chief, Zardari said Imran was playing a full toss ball for the time being. "Let's wait till he faces a 'no-ball'."

Bilawal Bhutto said that the Sharif family would not get any relief from his party. “We are with democracy today and would continue to support it in future as well,” he added.

The PPP chairman called for across-the-board accountability of all rather than targeting political rivals.

He also announced to hold public gatherings in Attock and Mansehra - two districts of Khyber Pakhtunkhwa where Imran-led PTI holds a majority.

On Wednesday, Zardari said the PPP would not participate in any ‘grand national dialogue’, idea of which was floated by former prime minister Nawaz Sharif earlier this month.

Ahead of kicking of his GT Road rally, the ex-PM had suggested that 'before the next general elections, grand dialogue/new social contract was needed to be worked out and the forthcoming polls could serve as a referendum on it'.

Strongly rejecting the proposal, Zardari said: “I don't want to keep contact with Nawaz Sharif, so no question of dialogue arises.”

He added Nawaz's priorities keep changing with respect of time. “Neither I am in contact with him nor I would like to stay in touch him,” Zardari said while talking to his party leaders at a consultative meeting here at Lahore’s Bilawal House.

More recently, Bialwal Bhutto too has hinted that this time PPP is not going to bail out PML-N. “Former prime minister Nawaz Sharif is only trying to save himself and making contempt of court in his speeches but it appears that contempt of court applies only to the PPP," Bilawal said during last Friday’s presser.

“The PPP has never supported the PML-N but we always come forward for democracy and if there is any threat to democracy, the PPP will gain on the forefront to defend it,” he said.