Punjab Government's ad on APS Peshawar attack features US victim of terrorism, but why? 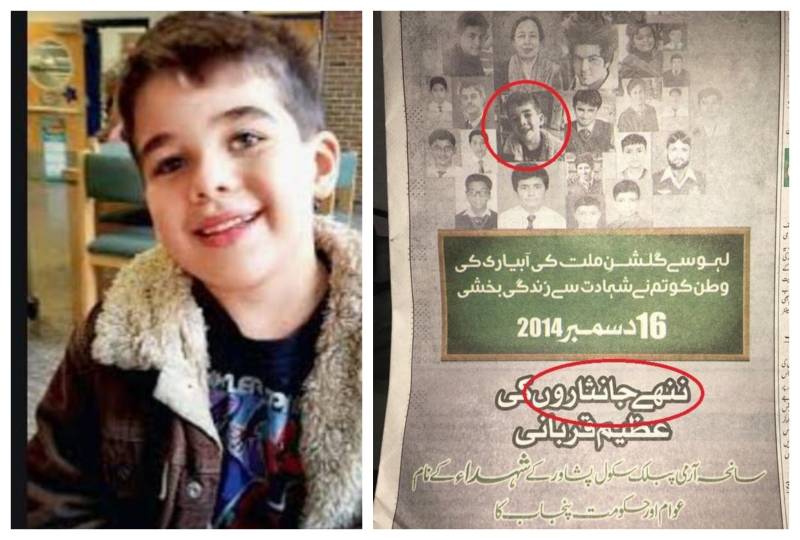 LAHORE – As the nation mourns the victims of 2014 Peshawar attack on sixth anniversary, an advertisement by the Government of Punjab in leading Pakistani newspapers featured an American child among the APS schoolchildren.

The child from the ad is 6-year-old Noah Pozner, who was the youngest victim killed in the 2012 school massacre in the United States.

Carrying Noah’s picture, the ad has been carried by leading Urdu dailies like Roznama Express and Roznama Jang across the most populous Pakistani province without proper verification of the pictures. The said picture is a part of the collage, carrying photos of the actual victims of APS Peshawar attack.

Even though the Pakistani nation that has seen the worst of terrorism in the last two decades have always sympathised with the victims of violent attacks anywhere in the world, this ad exposed the performance of Punjab government who simply could not mark such an important day in the right manner.

Such insensitivity and ignorance not only damage the credibility of the government itself, but also hurt the sentiments of the victim families while the pain of the bereaved is still fresh.

On 16 December 2014 Taliban gunmen stormed the Army Public School in the northern city of Peshawar, killing more than 150 people, including 132 students, their principal and 16 staff members.

NEW YORK - The girl whose photo was shown by Pakistan diplomat Maleeha Lodhi at United Nations last evening as an ...