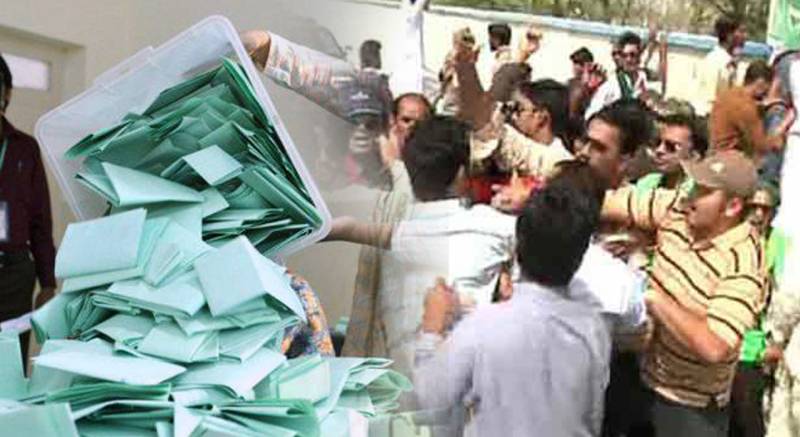 LAHORE – The critical by-elections on 20 Punjab Assembly seats were marred by several incidents of altercation, and claims of vote buying in the parts of the country’s most populated region.

The country’s top electoral body said it received more than a dozen complaints so far during the by-polls in 20 constituencies of the Punjab province with most complaints related to clashes between rival political groups. ECP will also be probing rigging allegations.

Punjab police held PTI leader Shahbaz Gill in South Punjab for allegedly visiting different polling stations during the by-elections in the city with his FC guards.

A clash was also reported between political workers outside a polling station in Lahore’s PP-158 constituency. ECP then issued directives to the district returning officer to inspect the location and receive a briefing from security officials.

Another clash erupted between PML-N, and PTI workers in Jhang as political rivals clashed outside polling station no. 126 of Jhang’s PP-125.

Several workers of PML-N, PTI, and TLP come face-to-face in the second largest constituency in the provincial capital. A clash was also reported between the political workers outside polling station 51 of PP-168.

An alleged audio leak of former security chief Sheikh Rashid surfaced in which he can be heard talking to a person about payment to Mian Jalil Ahmed Sharaqpuri, a dissident PML-N lawmaker from Sheikhupura.

Earlier in the day, Punjab Chief Minister Hamza Shehbaz whose future is tied to the outcome of this by-election called on the masses to vote. “People should come out to exercise their right to vote so a positive and constructive development journey continues in Punjab. InshaAllah the truth will prevail,” he wrote.

The Election Commission of Pakistan has established 3,131 polling stations in the constituencies , out of 676 were declared highly sensitive.

A special monitoring cell was also established at the Ministry of Interior headquarters in Islamabad to ensure law and order and the control rooms will continue working till the compilation of polling results.

Returning officers (ROs), respective deputy commissioners (DCs), representatives of police, Rangers, and Pakistan Army personnel will be present in the control rooms to deal with any untoward situation.

More than 50,000 police personnel were deployed in 14 districts across Punjab while there was a complete ban on carrying and exhibition of arms and the removal of election camps and banners of opponents.

On Saturday, Pakistan Army said its troops would only act as a “Quick Reaction Force” during the 'make-or-break' polls.

LAHORE – The Pakistan Tehreek-e-Insaf (PTI) on Sunday won the by-election on 15 of the 20 Punjab Assembly seats, ...

By-elections are being held on 20 Punjab assembly seats.

RAWALPINDI – Frontier Constabulary and Rangers will ensure security and law and order during the much-anticipated ...