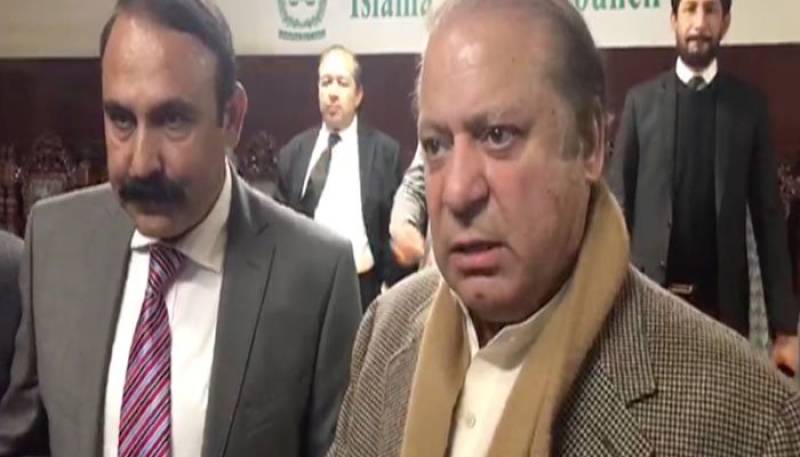 ISLAMABAD - Former Prime Minister Nawaz Sharif on Tuesday accused the cameraman of hitting his security guard's forehead with his camera when he pushed him out of the way, causing a commotion.

Talking to journalists at an accountability court in the capital, he, however, expressed his regret at the attack on a cameraman of a private news channel by his security guards.

He vowed to take the matter to its logical conclusion, adding that the incident should never have happened.

Explaining the event, Nawaz said that Shakoor, the chief security guard, was clearing the path for him when he pushed the cameraman.

The cameraman, then, hit Shakoor's forehead with his camera, leaving him injured, the former prime minister said.

"I saw the [cameraman] getting pushed, my guard getting hit, after that I don’t know what happened," the former premier said.

A video footage of the incident shows Wajid Ali, a Samaa TV cameraman, filming Sharif as he was leaving the Parliament House when the security guards attacked him.

The video shows the guards chasing the cameraman, who ran away to save himself but was eventually caught by the security guards who kicked him in the face.

Police have registered a case against former Prime Minister Nawaz Sharif’s security guards for attacking a cameraman associated with a private television channel.

The victim, in the FIR, said he was covering the Parliament session and when he started filming the former premier who was coming out of the Parliament, the security guards of Nawaz attacked him.

Ali said he tried to run away but the two of the guards caught up him and beaten him, adding that one of the security guards threatened to kill him.

The FIR has been registered against the former prime minister’s chief security officer, Shakoor, and the other two unnamed guards.