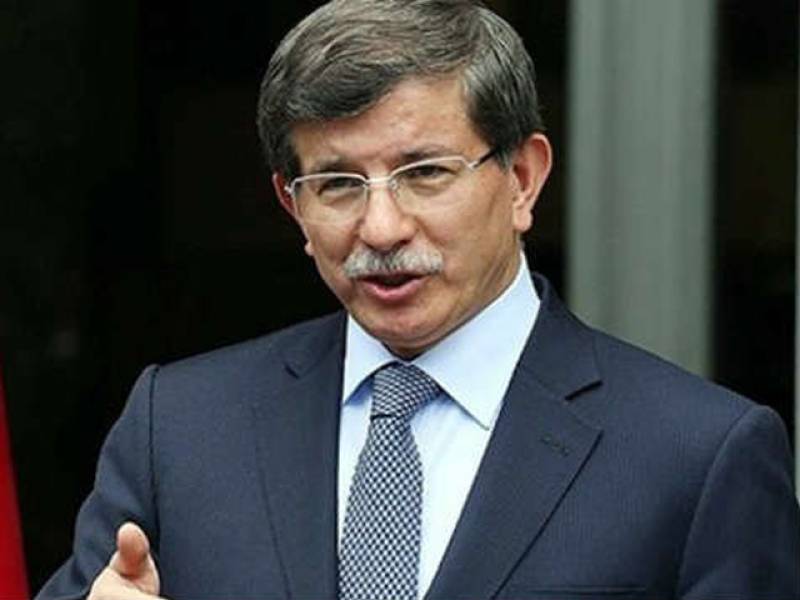 ISLAMABAD (Umar Shami) - Pakistan is the testing ground for Muslim Politics and its success will be the success of the Muslim World. Pakistan has a bright future despite difficulties and recent peaceful democratic transfer of power is a big step in that direction. Pakistan must build social consensus to fight the menace of terrorism and it’s commendable that political and military leaderships have risen to the occasion by adopting a common stance.

These views were expressed by Turkish Prime Minister Ahmet Davutoglu towards the end of his two day visit to Islamabad. He was talking to a delegation of Council of Pakistan Newspaper Editors comprising of selected group of senior editors. The Prime Minister despite having a hectic day of continuous activities took time out to interact with senior editors in the late hours of Tuesday. He spoke eloquently on a wide range of issues with special emphasis on the fast changing geopolitical realities of the world and their impact on Turkey and Pakistan.

The Prime Minister, renowned as a political scientist and an academic, forwarded his vision of the ongoing world conflicts forcefully. “Those who can feel the pulse of History are able to view world events with a longterm approach. Humanity is going through massive transformation and the concept of Nation State is changing examples being Iraq and Syria”.

The Prime Minister further elaborated his argument by citing examples of four big geopolitical earthquakes in the last two decades. “The disintegration of Soviet Union was the first geopolitical earthquake, aftershocks of which are still felt in the shape of Ukranian crises. The attack on World Trade Center famously referred to as 9-11 was the second such earthquake , the economic world recession of 2008 was third whereas Arab Spring was the fourth and final”.

He added that at this moment in time the effects of all the four earthquakes are converging and their aftershocks are still reshaping the world. Only those Nation States will survive which have both the Vision and the capacity to govern. Even States with No Vision but with capacity to govern can weather this storm but States which do not possess either of them will face disintegration and chaos. “The History will not end but it will flow much faster and only countries with accountable democratic stability along-with a Vision for sustainable economic growth will prosper”.

The PM portrayed the example of Turkey and said Turkey is also at the epicenter of all these earthquakes and their aftershocks but is being able to reform its society with accountable democratic stability. In the last 12 years, Turkey’s per capita income has risen three fold to $ 11000 per capita and its GDP size has risen to $ 850b from $ 230b.

He also added that these achievements were only possible by bringing in transparency and strengthening democracy. “We have defeated undemocratic forces by our performance and have restored the self confidence of Turkish nation. No segment of the society has any privilege to govern except the people”.

The PM threw light on the checkered history of civil military conflict in Turkey and said till 1990’s, the President could only be a military man. The establishment was not ready to relinquish control and it was commonly believed by them that elected people are unreliable to take strategic decisions. They were confined to tackling limited domestic economic and social issues but foreign affairs were out of bound for them. “All this has changed now and even military and civilian bureaucracy has accepted the sovereignty of the people”. However the key is to perform and improve the lives of ordinary citizens.

The Prime Minister expressed high hopes for the future of Pakistan and showed satisfaction that democracy is progressing and the country is moving in the right direction. “The picture I see in today newspapers shows Mr Nawaz Sharif, Mr Asif Zardari and the Army Chief sitting on the same table. This is the picture Pakistan needs to see more if it has to overcome its challenges”.

He also added that the government of Pakistan has acted wisely during the opposition agitation movement and it shows democracy is maturing in Pakistan. He also expressed his satisfaction on the enhanced coordination between Pakistan and Afghanistan government and hoped that the two countries will work together to eliminate terrorism from their countries. He also said that Turkey has played a substantial role in bridging differences between Pakistan and Afghanistan through Trilateral Summit meetings and those efforts have finally borne fruit. He also informed that ninth Trilateral Summit meeting will be held in Turkey in the coming months.

The Prime Minster also stressed that to achieve economic and political stability, Pakistan should strive to normalize relations with its neighbors. “I am happy that contact between India and Pakistan has also revived and expect that tension will decrease over the next few months”.

The Prime Minister also emphasized that economic relations between Pakistan and Turkey need to be enhanced significantly. He said that brotherly relations between the two countries are not translating into economic benefits for the people of both countries. He said that trade between both the countries is dismal in comparison to the huge potential and there is a need to increase economic cooperation. “We are like brothers to each other.  But to achieve more economic integration, we need to show not only emotional solidarity but also economic rationality”.

Answering a question regarding media reports of arrest of some media persons in Turkey, the PM strongly refuted this news. He said that media is absolutely free in Turkey and there are over 7000 Newspapers and 400 National and Local TV Channels in Turkeywhich freely criticize the government. “Of the five largest newspapers in Turkey, four are anti government and they publish all sort of criticism on the government”. He further added that however some people try to conspire against the government and indulge in illegal activities in the garb of media men.

“Nobody can be allowed to form a parallel government structure and freedom of expression should be within the confines of law.” The PM was obviously referring to the FateuhllahGulen’s movement which also owns a large media establishment in Turkey. He severely criticized the movement for creating misperceptions about the Turkish government especially the leadership of AK Party. He also drew similarities between Fatehullah Golan and TahirulQadri to bring his point home and said that advancing political agenda in the garb of religion is highly condemnable. “If someone wants to govern, he should not use a back door but should rather openly contest elections by forming a political party and let the people decide. Politics should be based on Values, Values should not be exploited for political purposes”.

Responding to another query regarding the need for a Muslim Organization on the pattern of United Nations to address grievances of Muslim countries, the PM in principal agreed with the idea but also expressed sorrow on the precarious state of affairs in majority of the Muslim Countries. We first need to put our house in order by forming representative and accountable governments, he added. “United nations is out of context as an institution created after Second World War does not accurately reflect the current geo political realities. However we in Muslim countries also need to decide that either we are stuck for a choice between “Dictatorship” or “Daish” models or we have a third option also available”. The third option which can take Muslim Ummah forward should be based on democratic stability and rational politics, the PM concluded.