Everyone now has to respect the vote, says Nawaz in Sheikhupura 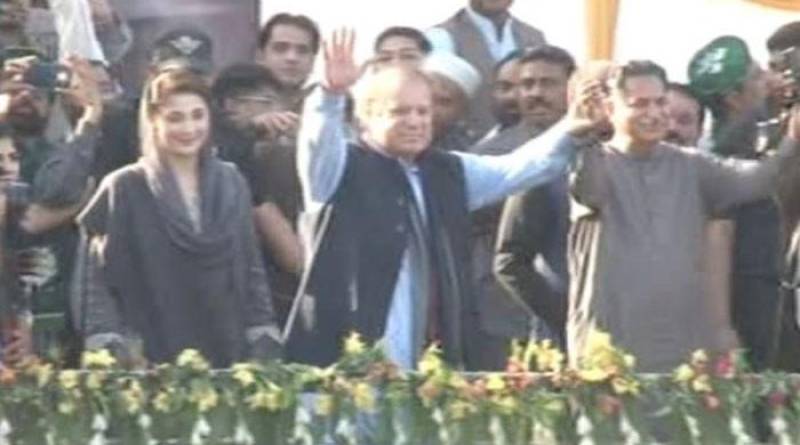 SHEIKHUPURA - Former prime minister and president of the Pakistan Muslim League-N (PML-N) Nawaz Sharif on Sunday said that now everyone has to respect the vote and elected governments.

While addressing the public rally at company Bagh in Sheikupura, Nawaz said that he was deposed over putting the country on the path of development and prosperity.

"I will leave the politics for good if anyone proved even single penny of corruption against him," Nawaz challenged opponents in front of a large number of PML-N supporters, mainly youth.

Look at this ! On the way to Sheikhupura pic.twitter.com/x6dzCN72Qy

“You have welcomed a disqualified prime minister today,” he said, asking the party supporters if he is in fact ‘disqualified’. Nawaz complained that he wasn’t allowed to complete his five-year tenure despite being elected for that time period by the people.

The PML-N chief said that he is scared of no one but God, vowing that he will change the country’s destiny with the help of the people.

The country will be in extreme danger if the things that have been happening for the past 70 years are allowed to continue, he added.

"I have brought Nawaz's case to your court today," said Maryam, asking the crowd if they agree with Nawaz's disqualification.

Maryam lamented that every time, Nawaz was removed from office in questionable ways. "Will you do something or let this circus continue," she asked the gathering, adding that the same has happened with every elected prime minister of the country.

She also questioned the neutrality of judges who "speak against Nawaz and then sit on the bench hearing his case".