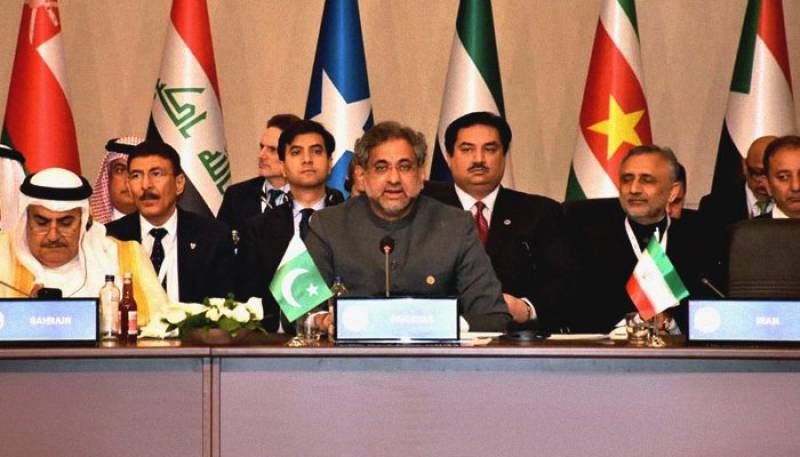 Addressing the seventh extraordinary summit of the Organisation of Islamic Cooperation (OIC) in Istanbul, Abbasi said that a transparent and independent was needed to investigate the crimes of Israeli forces.

He also urged the United Nations Security Council (UNSC) to implement its strategic resolutions in the Palestine-Israel dispute in order to end the human rights violations by Israeli forces. Abbasi also slammed the shift of the US embassy from Tel Avis to Jerusalem.

On May 14, at least 61 Palestinian people were killed by the Israeli military and more than 2,700 injured along the Gaza border on Monday, health officials said, as the US officially moved its embassy to the unauthorised state, Israel.

The extraordinary summit was called by the President of Turkey in his capacity as the Chair of the OIC Summit.

According to the final communique of the summit, the Muslim leaders condemned in the strongest terms "the criminal actions of Israeli forces against the Palestinian people in the Occupied Palestinian Territory, particularly in the Gaza Strip, where unarmed Palestinian civilians are exercising their legitimate right of peaceful protest against this inhumane and absolutely illegal occupation...".

The summit declares that the violence acts constitute savage crimes committed by the Israeli forces with the backing of the U.S. Administration.

The participants called on "the international community, in particular the UN Security Council, to uphold its legal obligations to defend the international law and order as they relate to Palestine; to act in line with its legal and moral obligation to ensure accountability for these unchecked crimes that Israel, the occupying power, is carrying out with impunity; and to put an end to these atrocities, and to provide international protection for the Palestinian people".