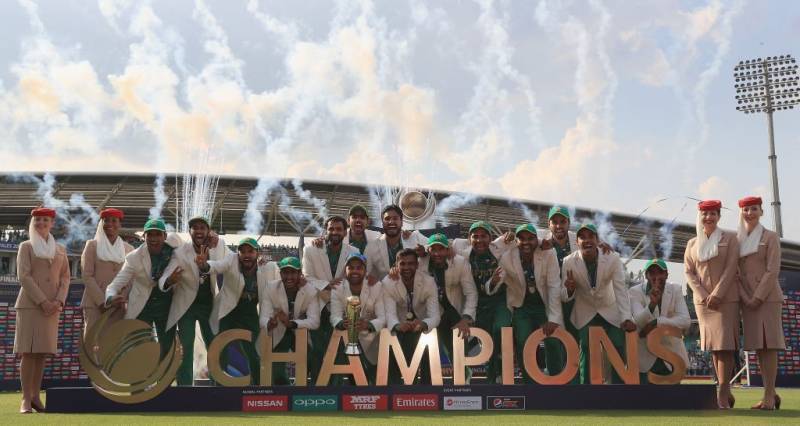 Pakistanis are celebrating the fifth anniversary of the 2017 Champions Trophy when the Sarfraz-led squad bagged the clash between its biggest cricket rival India.

The moment was no less than joyous for Pakistanis as Men in Green did not look back till they had whizzed past the finish line in style.

Pakistan Cricket Board on this occasion released a short documentary to recount a memorable campaign.

Former skipper Sarfaraz Ahmed called the moment ‘outstanding’, giving credit to the playing XI and coaches, especially who according to him set the tone for the crucial tournament.

The clash between the South Asian neighbours is normally the most-watched and anticipated match so was the 2017 game in which emotions were sky-high.

On the other hand, India's openers got off to the worst start as Rohit Sharma returned to the pavilion on a duck while star batter Virat Kohli only managed to score five.

At what point did you feel Pakistan had the match in the bag? 🤔#WeHaveWeWill pic.twitter.com/bl3REluneS

Hardik Pandya played a knock of 76 runs, giving hope to Men in Blue but the right-handed batsman was run-out in the 27th over. India was later bowled out for 158, giving Sarfraz XI a win by clinical 180 runs.

He dismissed the Indian flamboyant opener in the very first over of the inning with an in-swinging ball that hit his pads.

Down and out? You bet! Let's take you to behind the scenes footage of Pakistan's remarkable journey to the #CT17 title! 😍 #WeHaveWeWill pic.twitter.com/i5zM1VWWZ8

The victory of Men in Green was no less than a remarkable achievement as the team earlier struggled for its qualification for the international tournament.

The Champions Trophy is no longer a 50-over-tournament and has been changed into a full-fledged T20 event by the top cricket body.