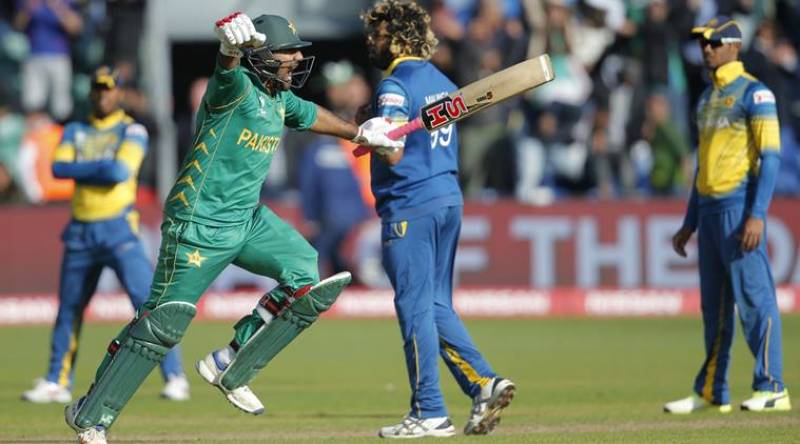 ABU DHABI  - Debutant Imam-ul-Haq scored a century and propelled Pakistan to a comfortable win against Sri Lanka in the third ODI at Abu Dhabi on Wednesday.

A brilliant century by Imam, who scored 100 off 124 balls, set the stage for Pakistan to win the five-match ODI series 3-0.

Pakistan were off to a steady start and reached the 50-run mark without the loss of any wickets in the third ODI at Abu Dhabi on Wednesday.

During the first innings, energetic seamer Hasan Ali became the quickest player to reach 50 one-day international wickets for Pakistan as Sri Lanka were dismissed for 208.

The 23-year-old took a career-best 5-34 and was ably assisted by leg-spinner Shadab Khan (2-37) as Sri Lanka, who won the toss and batted, lost their last nine wickets for only 106 runs.

Hasan, who had given Pakistan the early breakthrough with Dickwella's wicket, removed Chamara Kapugedera (18), Milinda Siriwardana (two) and Jeffrey Vandersay (nought) to complete 50 wickets in his 24th ODI.

The previous record was held by legendary paceman Waqar Younis, who took 27 ODIs to reach the mark. Hasan's previous best bowling figures were 5-38 against the West Indies in Guyana earlier this year.

Earlier, Sri Lanka won the toss and opted to bat first against Pakistan in the third One-Day International (ODI) being played at Sheikh Zayed Stadium in Abu Dhabi.

Pakistan have made two changes; Ahmed Shehzad and Imad Wasim have been left out for Imam-ul-Haq and Fahim Ashraf. For Sri Lanka, Dushmantha Chameera is in and Chamara Kapugedara. Kusal Mendis has been dropped.

Pakistan vs Sri Lanka 3rd ODI will be broadcast live on PTV Sports and Ten Sports. Sony Ten network from 4:00pm IST with the toss and subsequent coverage.

How do I live stream Pakistan vs Sri Lanka 3rd ODI?

The match  will be live streamed on en.dailypakistan.com.pk