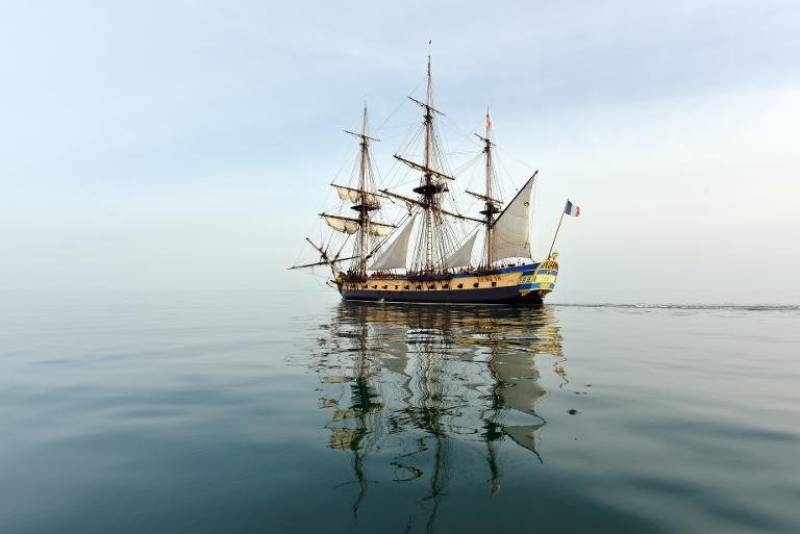 LA ROCHELLE (APP) - A replica of the 18th century ship that took a French general on his voyage to become a hero of the American war of independence set sail again Saturday, cheered off by thousands of well-wishers and President Francois Hollande.

Thousands gathered to wish "bon voyage" to the painstakingly recreated tall ship Hermione, leaving from Ile d'Aix, in southwest France, for the east coast of the United States.

The French and American flags were raised on the wooden frigate as it embarked on an Atlantic crossing retracing the voyage 235 years ago of General Lafayette, who won fame for rallying America's rebels fighting for independence from Britain.

"The Hermione is a glorious page of our history... thus was sealed one of the finest alliances, a fraternal alliance," Hollande said ahead of the vessel's departure, followed by a rendition of the American national anthem, the "Star Spangled Banner".

US consul in Bordeaux Thomas Wolf read out a statement in French from President Barack Obama in which the American leader spoke of the "unwavering friendship and solidarity between the two countries".

"The tribute we are paying today to the extraordinary efforts by General Lafayette and the French people in favour of the American Revolution reminds us that our partnership with France has made it the oldest ally of our nation," he added.

After a fireworks display, the ship's crew set off in the rain at 2045 GMT, with a first stop due in the Canary Islands before continuing on their 7,500-mile (13,000-kilometre) journey that should take them around six weeks.

Some 80 crew members will sail the three-masted 65-metre (213-feet) ship along the route to Boston made by French General Gilbert du Motier -- the Marquis de Lafayette -- to bolster revolutionaries fighting for an independent United States.

Back in 1778 the original Hermione took a mere six months to build. The new replica took 17 years to construct, mobilising hundreds of craftspeople from around the world.

The crew plans to make landfall on June 5 in Yorktown in Virginia, where US troops led by George Washington and French soldiers accompanied by General Lafayette scored a decisive victory over the British in 1781.

"The Hermione, the ship that reunited Lafayette and Washington and sealed our freedom, sails again for America," trumpets the website promoting the reconstruction of the epic journey.

The project is the brainchild of a group of history and sailing enthusiasts who two decades ago embarked on the arduous task of recreating the vessel using only 18th century shipbuilding techniques.

The frigate is scheduled to make more than 10 stops in the United States as it sails up the east coast, including in Baltimore, Philadelphia and Boston.

Hermione will also sail into New York Harbour just in time for July 4 independence celebrations, with an expected escort of hundreds of local yachts.

Yann Cariou, a veteran sailor who has already completed seven round-the-world trips in the military and civilian navy, will captain the imposing ship.

The project cost 25 million euros ($32 million), financed by more than four million visitors to the shipyard in Rochefort in southwestern France where the ship was built, as well as through crowd-funding initiatives for specific parts of the ship.

It took Lafayette 38 days to cross the Atlantic, a voyage that confirmed his renown as a hero of the American Revolution.

Even today, Lafayette remains a constant presence across the country he helped transform from British colony into the energetic new state that would eventually become today's superpower.

At least 42 US counties and cities and hundreds of streets and squares -- including the famed Lafayette Square opposite the White House -- are named after him or after his ancestral home in France, La Grange.