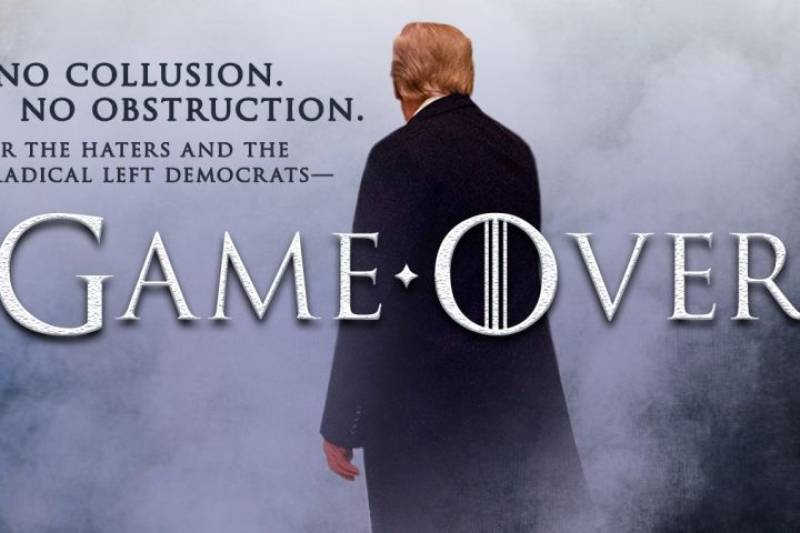 WASHINGTON DC -HBO has responded after US president Donald Trump used a Game Of Thrones-inspired meme to push his politics, and they aren’t happy.

The US president tweeted a meme in reference to special counsel Robert Mueller’s heavily redacted investigation into Donald Trump and Russia which was released today.

Trump's post in response, using Game Of Thrones style font, read: ‘No collusion. No obstruction. For the haters and the radical left Democrats, game over.’

Here is the GoT inspired tweet bu the US president:

Let's go through some of the responses to Trump's post:

This is NOT a game. This is OUR DEMOCRACY, OUR nation, OUR rule of law. That you would post this underscores how unfit you are for office. The only question is for @GOP @SenateGOP @HouseGOP : how can you continue to support this corrupt and traitorous adminstration? #BarrCoverUp

What is The Mad King upset about this time?

Following Donald Trump's tweet, HBO has released a statement to American daily 'Metro.co.uk' which, essentially, asks for the president to stop using their show’s iconography.

The statement reads: ‘Though we can understand the enthusiasm for Game Of Thrones now that the final season has arrived, we still prefer our intellectual property not be used for political purposes.’

This isn’t the first time HBO has asked Trump to stop using Game Of Thrones memes after he previously used the show’s font to post a meme reading, ‘Sanctions are coming’, based on House Stark’s slogan, ‘Winter Is Coming’. At the time, HBO responded: ‘How do you say trademark misuse in Dothraki?’

The long-awaited return of hit fantasy series ‘Game of Thrones’ proved to be a milestone for HBO, which relished an all-time rating record. The Season 8 premiere scooped in more than 17 million viewers across live broadcast and streaming platforms, reported Entertainment Weekly.

The episode topped the 16.1 million who saw the seventh-season premiere and the 16.9 million who watched that season’s finale.

The final episode of Game of Thrones will air on May 19.