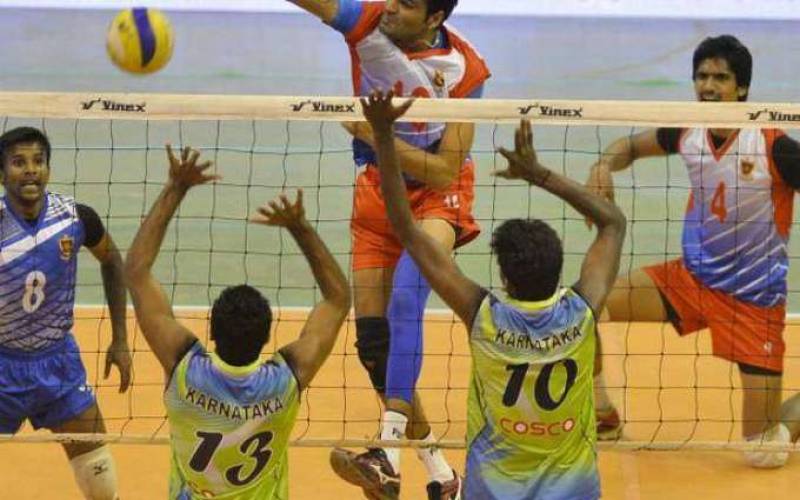 All the four-team won their respective matches with ease and comfort in straight games outshining their opponents with all-around performance and lively moves on the fifth day of the premier volleyball activity. Wapda put up another dazzling performance to give a big boost to its claims for retaining the title.

Comprising young blood Police started the first game against WAPDA in an aggressive style taking the lead which they maintained till 10-8. Waqas Ahmed served and smashed well. Naseem Khan also showed his brilliance in serving hard which earned valuable points. However, they lost their zeal in the second game against more experienced and capable Wapda players. Brilliant smashes in gaps by Mohib Rasool and Murad Jehan guided Wapda to take a comfortable lead. Their blocking was also effective.

Khalid, Sharif and Ali were instrumental for NAVY's comfortable win against POF. They served well and boosted accurately to create space for their smashers. Particularly Ali earned four back to back points for his team. POF players smashed wildly, most of which landed out of line. They also faltered in their serves.

The match between ARMY and Railways proved one-sided. Army men dominated the proceedings since the beginning of the match. They continued to exert pressure through their accurate serves, boosting and smashes. Particularly, Zameer and Fakhhar smashed in gaps and served well. Rail men were clueless where to smash amid effective blocking of NAVY defenders. They tried hard to give insignificant resistance in the last two games, particularly in the third game they were very close at 8-10 but ARMY men kept their lead increasing with frequent intervals.

HEC was expected to face PAF bravely but their morals were downed losing the first game badly. They composed themselves to show some resistance in the second game with a wide margin. However, they fought hard in the third game and give some anxious moments to their opponents before losing it at 25-21.