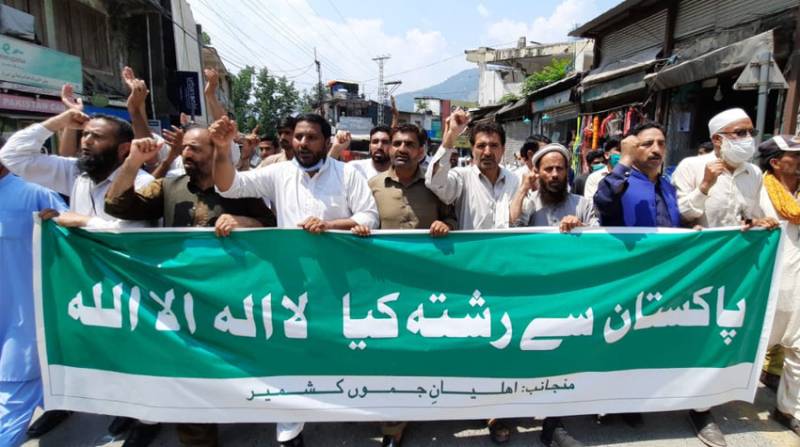 Kashmiris on both sides of the Line of Control and all over the world are observing the Accession to Pakistan Day today (Tuesday) with a renewed pledge to continue the struggle for freedom from Indian occupation and complete merger of Jammu and Kashmir with Pakistan.

On this day in 1947, genuine representatives of the Kashmiris unanimously passed the resolution of Kashmir’s Accession to Pakistan during a meeting of the All Jammu and Kashmir Muslim Conference at the residence of Sardar Muhammad Ibrahim Khan in Srinagar.

ISLAMABAD -Jammu and Kashmir National Front (JKNF) on Sunday while terming 19th July as a defining moment in ...

The APHC leaders, in their separate messages termed July 19 as an important milestone in the history of Jammu and Kashmir.

They said Kashmiris will not rest till Jammu and Kashmir attains freedom from Indian slavery and becomes part of Pakistan. Rejecting brutal policies being pursued by Modi regime in the occupied territory, the leaders urged Kashmiri people to unite and resist India’s evil designs of suppressing their freedom struggle.

In Azad Jammu and Kashmir, it is a public holiday on Tuesday to facilitate the masses to participate in the special programmes to commemorate the Accession to Pakistan Day in a befitting manner. Wide scale programs have been chalked out to observe the day across Azad Jammu Kashmir, Indian Illegally Occupied Jammu and Kashmir and in other parts of the world where Kashmiris are living.

The aim of observing this day is to strengthen and promote the ideology of accession of entire Jammu Kashmir state to Pakistan.

ISLAMABAD – Kashmir Martyr Day is observed in Pakistan and on both sides of the Line of Control as well as by ...