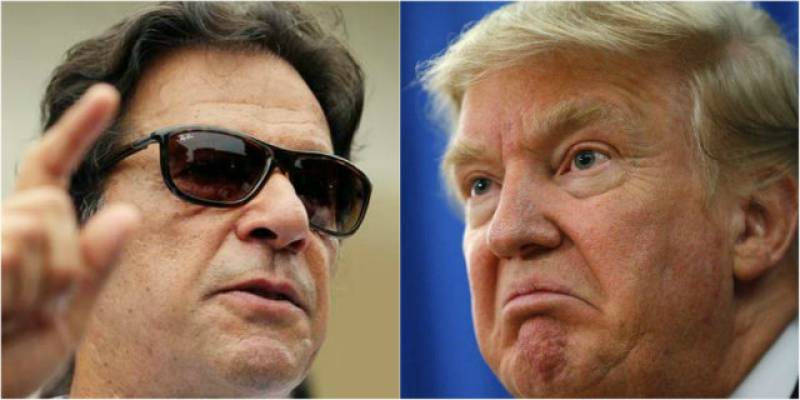 A day after the US president, in a Fox News interview, ranted that Pakistan doesn't "do a damn thing for us,” PM Khan suggested in a series of tweets that Trump should examine his own country's failed "war on terror" and stop "making Pakistan a scapegoat."

Record needs to be put straight on Mr Trump's tirade against Pakistan: 1. No Pakistani was involved in 9/11 but Pak decided to participate in US War on Terror. 2. Pakistan suffered 75,000 casualties in this war & over $123 bn was lost to economy. US "aid" was a miniscule $20 bn.

Osama Bin Laden was found to be hiding in the Pakistani city of Abbottabad, where he was killed in a raid by US Navy Seals in 2011 in an incident that sent relations between the wayward allies to a new low. Pakistan denies it knew bin Laden's whereabouts prior to the raid, which was carried out without its knowledge. It later arrested Dr Shakil Afridi, who had run a fake vaccination campaign in Abbottabad to help the CIA confirm bin Laden's whereabouts.

Washington has long pressured Islamabad to crack down on militancy, accusing Pakistan of ignoring or even collaborating with groups which attack Afghanistan from safe havens along the border between the two countries.

But, Khan wrote: "The US should do a serious assessment of why, despite 140,000 NATO troops plus 250,000 Afghan troops and reportedly $1 trillion spent on war in Afghanistan, the Taliban today are stronger than before."

Instead of making Pakistan a scapegoat for their failures, the US should do a serious assessment of why, despite 140000 NATO troops plus 250,000 Afghan troops & reportedly $1 trillion spent on war in Afghanistan, the Taliban today are stronger than before.

Khan also highlighted that Pakistan's tribal areas along the border have been devastated by years of war, with millions uprooted from their homes.

3. Our tribal areas were devastated & millions of ppl uprooted from their homes. The war drastically impacted lives of ordinary Pakistanis. 4. Pak continues to provide free lines of ground & air communications(GLOCs/ALOCs).Can Mr Trump name another ally that gave such sacrifices?

He also pointed to the logistical support Pakistan has provided for the US war in Afghanistan. The main overland supply route for American forces fighting in Afghanistan runs through Pakistan.

Calling on Trump to name an ally which has sacrificed more against militancy, the cricketer-turned-politician said that Pakistan had suffered 75,000 casualties and lost $123 billion in the "US War on Terror," despite the fact that no Pakistanis were involved in the Sept. 11 attacks. He said the US has only provided a "miniscule" $20 billion in aid.

Just hours after the PM took to the social media to share Pakistan’s sentiments, President Trump doubled down on his criticism of past administrations, military leadership and the Pakistani nation for not capturing or killing Osama bin Laden sooner in a series of Monday morning tweets.

"Of course we should have captured Osama Bin Laden long before we did. I pointed him out in my book just BEFORE the attack on the World Trade Center. President Clinton famously missed his shot. We paid Pakistan Billions of Dollars & they never told us he was living there. Fools!".

"...We no longer pay Pakistan the $Billions because they would take our money and do nothing for us, Bin Laden being a prime example, Afghanistan being another. They were just one of many countries that take from the United States without giving anything in return. That’s ENDING!".

Following Trump’s rant, PM Khan responded with another tweet: “Trump’s false assertions add insult to the injury Pak has suffered in US WoT in terms of lives lost & destabilised & economic costs. He needs to be informed abt historical facts. Pak has suffered enough fighting US's war. Now we will do what is best for our people & our interests.”

Trump’s false assertions add insult to the injury Pak has suffered in US WoT in terms of lives lost & destabilised & economic costs. He needs to be informed abt historical facts. Pak has suffered enough fighting US's war. Now we will do what is best for our people & our interests

In September, Trump decided to cut off $300 million in US aid to Pakistan, accusing the country of providing a safe haven for terrorists.

Prior to his election as prime minister in July, Khan condemned Trump's decision to cut off aid as an attempt to "humiliate and insult" Pakistan and argued that his nation must never again be used by the US as a "gun for hire."

"We became a US proxy for a war against the Soviet Union when it entered Afghanistan and we allowed the CIA to create, train, and arm jihadi groups on our soil and a decade later we tried to eliminate them as terrorists on US orders," Khan declared in a January letter. "The time has come to stand firm and give a strong response to the US."