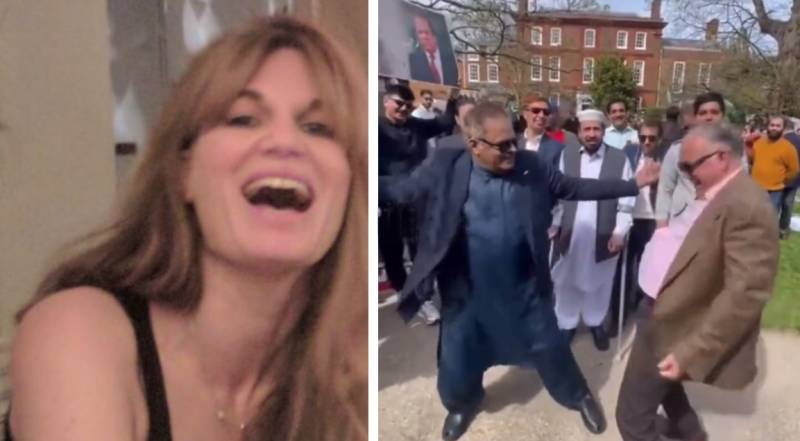 In the frenetic clip, the supporters of Pakistani ruling party can be seen showing silly dance moves.

“Let’s play charades- what is this protestor on the right outside my mother’s house miming after threatening to enter my bedroom? Keeping it classy, as always, PML-N,” the British socialite wrote on official handle.

Let’s play charades- what is this protestor on the right outside my mother’s house miming after threatening to enter my bedroom? Keeping it classy, as always, PML-N… https://t.co/lggIJQJ8PT

Supporters of the Pakistan Muslim League-Nawaz and the former ruling Pakistan Tehreek-i-Insaf are facing off in Britain as one group celebrated the ouster of former Pakistani premier Imran Khan and the other stage protest.

Another clip of British police officials on duty can be seen having biryani. PML-N distributed famous Pakistani dish among the protesters who protested outside Khan’s residence.

Amazing! PMLN protesters, outside Jemima's residence,have made British Police love their Biryani! No doubt Imran Khan finds it difficult to fight this kind of political penetration in Punjab! pic.twitter.com/YJt5mGMvNB

A group of men also threatened to break into the bedrooms of the former prime minister's family members, saying if PTI's supporters did not stop holding protests outside Sharif’s residence.

Jemima even asked the British cops if such threats were legal. Former spouse of cricketer turned politician stated that there were protests outside her house, that her children were being targeted and that she was facing antisemitic abuse on social media. “Its almost like I’m back in 90’s Lahore,” she wrote on Twitter.

This is a video of hundreds of men protesting for hours outside my 88 yr old mother’s house in Surrey yesterday.
The man with the tannoy is threatening -
“If Jemima and her children don’t come down here, then we will enter her bedroom.”@metpoliceuk is this legal? https://t.co/0aNE7J0Hmx

Ousted Pakistani premier Imran was married to British screenwriter from 1995 to 2004 and two also share two boys, Kasim and Sulaiman. The 48-year-old had moved to London after her divorce, where she has been living with her sons ever since.