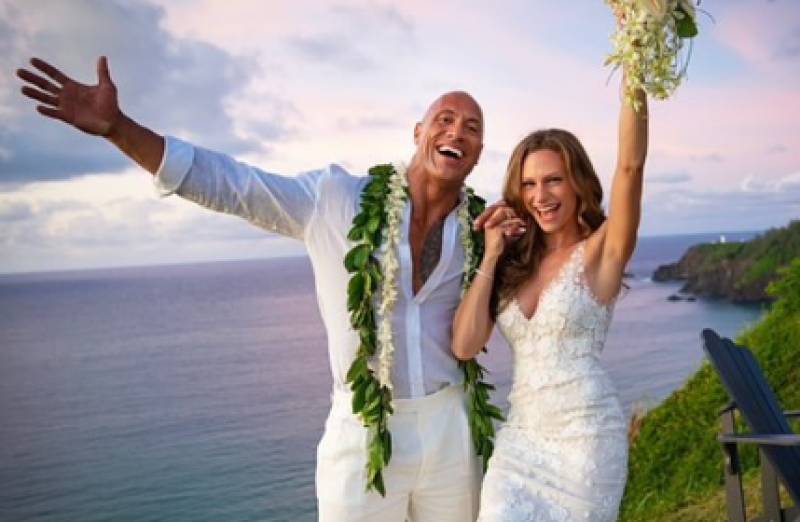 HAWAII - The Hollywood Dwayne Johnson aka the Rock has married his longtime girlfriend Lauren Hashian in Hawaii on Sunday. The wedding is reported to be a secret and private affair.

LOS ANGELES - Before he grew into the biggest movie star in all of Hollywood, Dwayne 'The Rock' Johnson was among the ...

The former WWE Superstar made the announcement public by sharing the news on his social media, leaving his 154 million followers on Instagram surprised.

The 47-year-old, Rock shared the happy news on his Instagram on Monday morning, by posting a couple of photos of the newlyweds with a caption, “We do. August 18th, 2019. Hawaii. Pōmaikaʻi (blessed).”

Both the bride and groom were dressed in whites. Hashian, 34, wore a white lace full-length gown and veil, while Johnson was dressed in a white buttoned-down shirt, showing off his infamous chest tattoo.

LAHORE - Hollywood star and WWE legend Dwayne  Johnson "The Rock" has thanked a Pakistani fan on Twitter this weekend ...

The couple has been together since 2007 and share daughters Tiana, 1, and Jasmine, 3. They first met in 2006 on the sets of Johnson’s film ‘The Game Plan’ when he was already married to Dany Garcia.

Here, wishing a happy life ahead to the newlyweds.