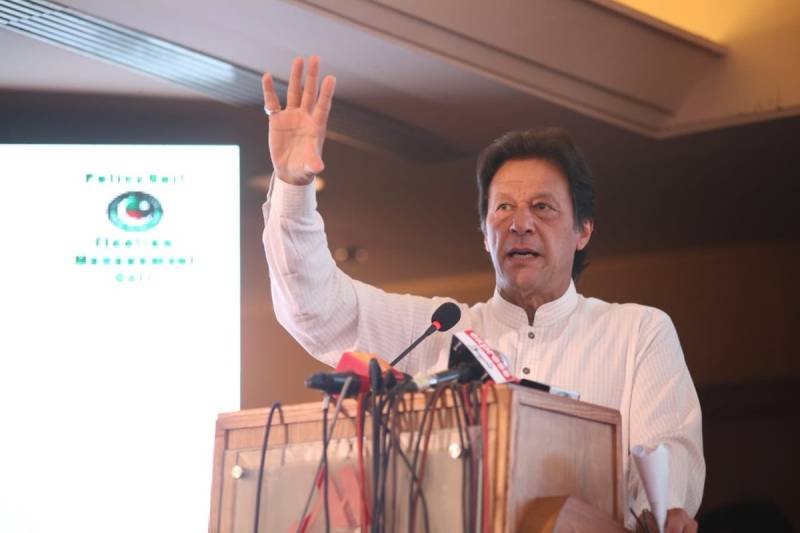 ISLAMABAD - The Pakistan Tehreek-e-Insaf (PTI) on Sunday unveiled its 100-day development and reform agenda to be completed within the first 100 days of government — if the party is elected to power.

The agenda includes transformation in governance, revitalisation of economic growth and ensuring the country's national security. 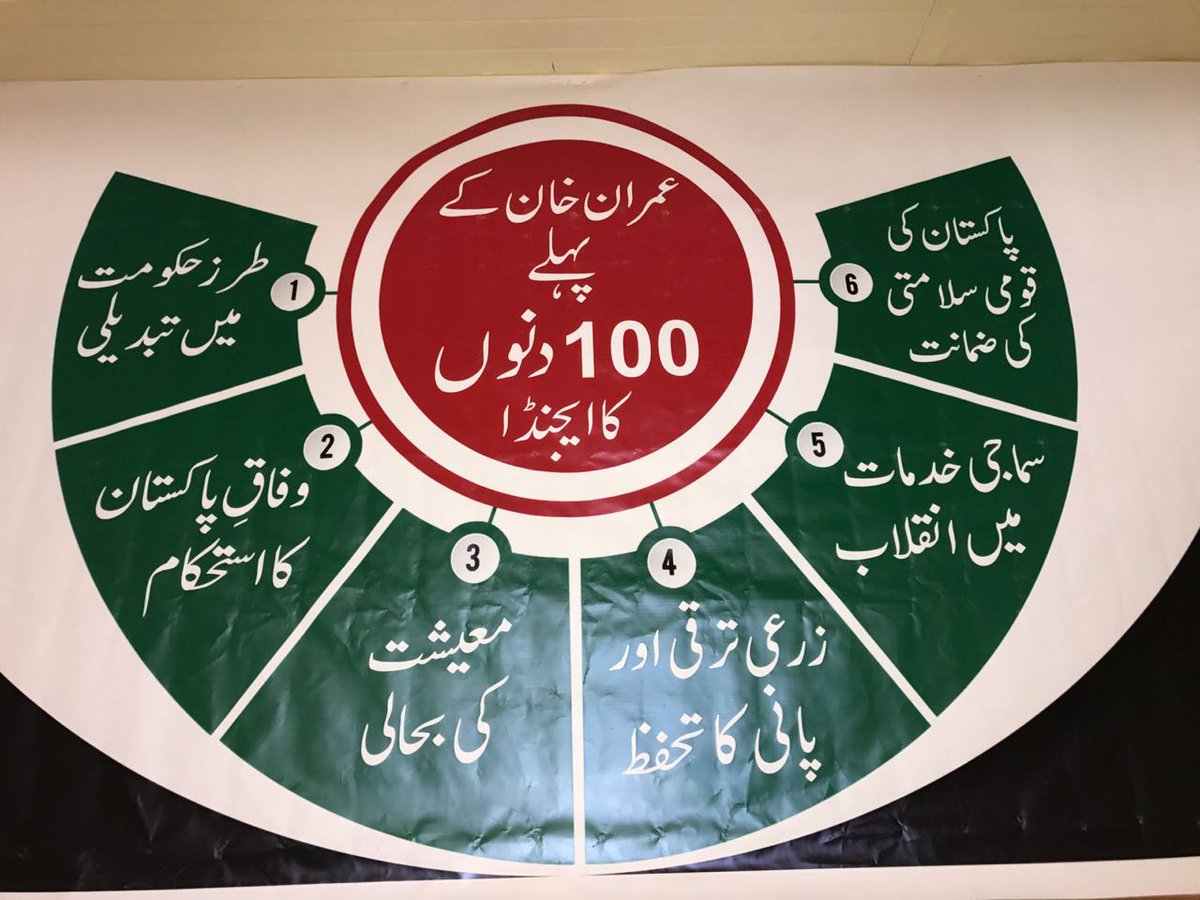 The PTI chief, making multiple religious references in his address, said that he envisions a Pakistan in which a leader is accountable even for the death of an animal.

“All policies under this 100 days agenda will look into how to make education, employment and other basic rights accessible to the common man,” said Khan.

"A civilised society is not known by how many big houses are constructed in Defence Housing Authorities, or now in Bahria [Town], but how people in the slums live," he added.

Khan said that the temperatures in Pakistan were rising because of climate change which is a reality and that its effects can only be mitigated by planting more trees. He regretted that the party's Billion Tree Tsunami project in KP was criticised by the PML-N despite being acknowledged by international organisations. 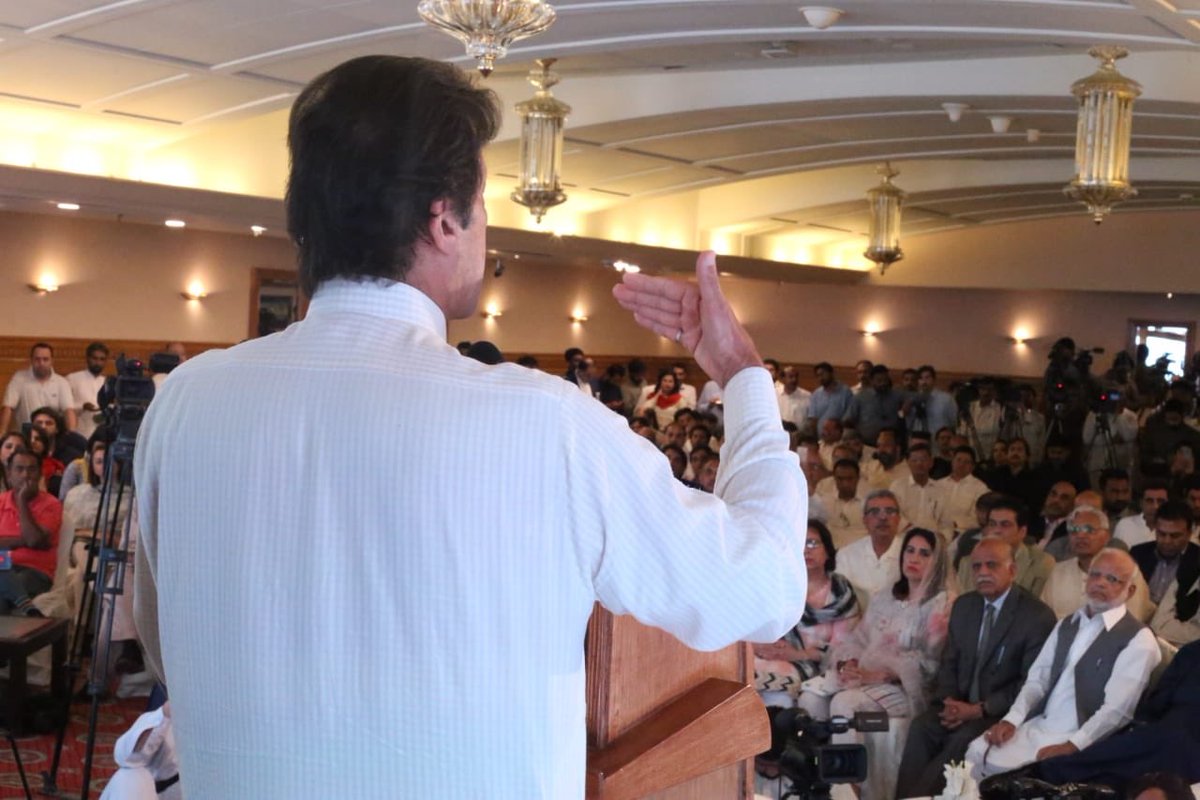 Stressing on improvements in governance and service delivery, Imran Khan criticised the incumbent government for being in a hurry to inaugurate projects using examples of the Orange Line Metro Train in Lahore and the new Islamabad International Airport.

"Have you ever seen Mahatir Mohammad or Nelson Mandela cutting ribbons?" he asked, adding that nation-building, not inauguration of some projects, is the real achievement.

"FATA reforms is a life old dream of Imran Khan who has roamed the areas on foot. To bring prosperity to the people of these areas who have been deprived for decades,” Qureshi told the audience. 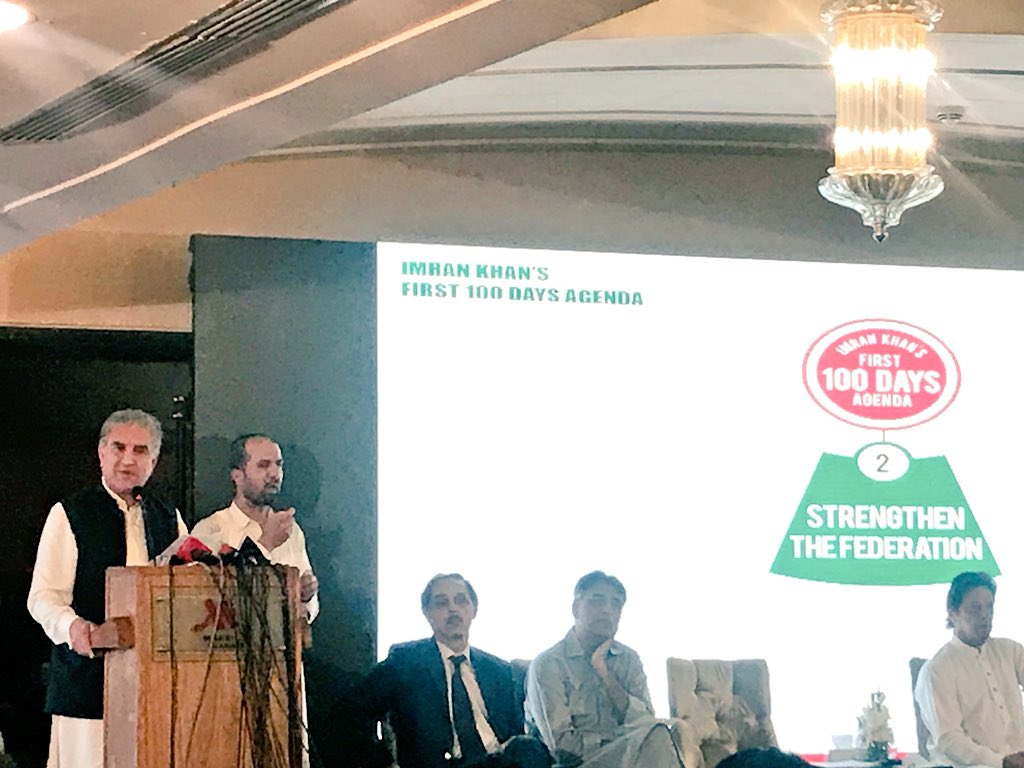 “The first initiative will be to merge of the Federally Administered Tribal Areas (Fata) with K-P to upgrade the socio-economic position of the tribal areas,” he said, adding that this would involve giving greater authority to the provincial government in Balochistan and making the development projects in the province more inclusive of the local population.”

The second and third points were to mainstreaming of ‘marginalised’ people and creation of South Punjab province.

He also said a federal plan would be introduced to improve civic amenities and the security situation in Karachi should the PTI come to power.

A special plan would be created to bring the poorest of the countries districts at par with others, he announced.

Asad Umar, a central leader of PTI, presented the economic highlights of the proposed agenda, which includes provision of jobs to youth and promotion of tourism.

He said that a policy to create 10 million jobs within five years would be formulated which would focus on provision of skills to youth.

"We have to reduce the burden of taxes on traders, businessmen and industrialists Small industries cannot bear the burden of unfair system of taxation," he said. 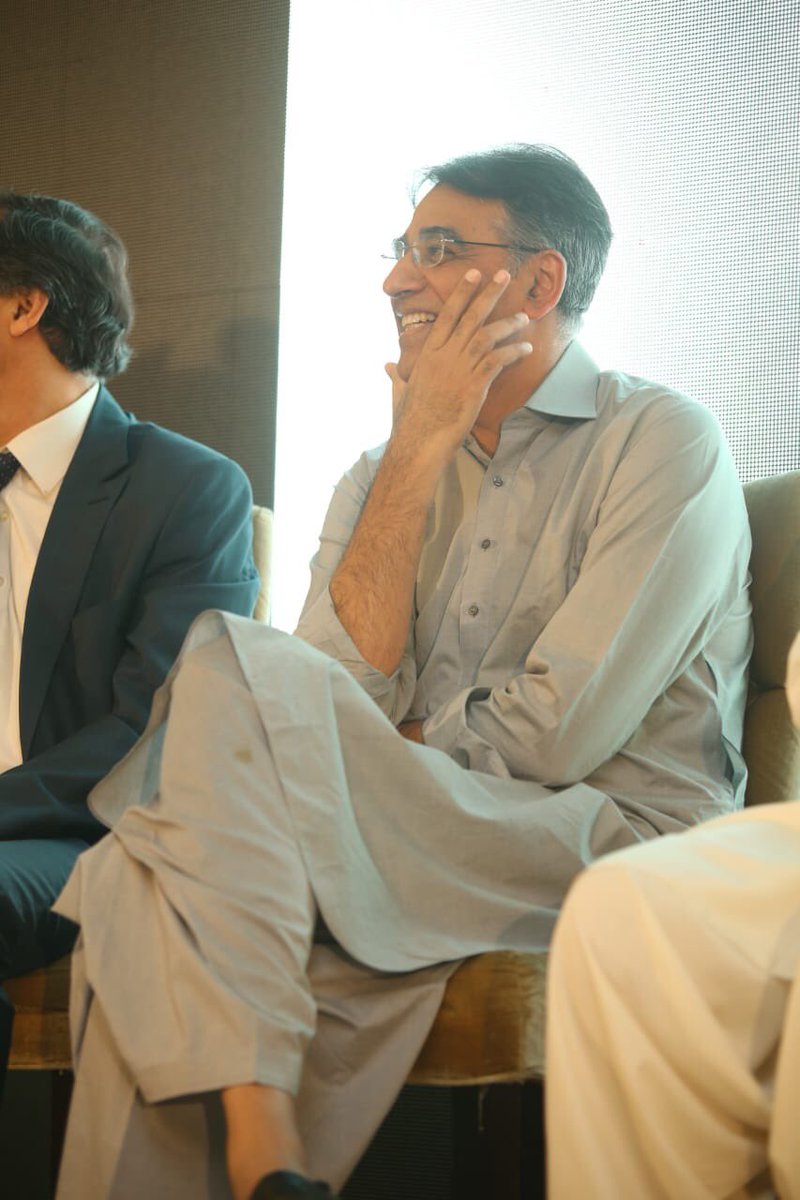 He announced that the government's guest houses would be turned into hotels and made available for the public, and that four new tourist spots would be discovered within the first 100 months.

Transforming Pakistan into a business friendly country, tax reforms and construction of 5 million houses is also among the main points of the proposed 10-point economic policy.

A "Council of Business Leaders" would be created to improve Pakistan's global business standing. He also said that "Pakistan Wealth Fund" would be created to fund institutions such as the Pakistan International Airlines, Pakistan Steel Mills and power distribution companies to bring revolutionary changes in them.

Umar also promised the party would end power crisis, turn the ongoing China-Pakistan Economic Corridor (CPEC) into a revolutionary project and improve the citizens and industrialists' access to capital.

The electricity and gas prices will be brought down as par with other countries in the region.

"We have to bring reforms in our financial system. God willing, this will take place after the election of Imran Khan as Prime Minister," he said, amid clapping from participants.

Jehangir Tareen, the disqualified secretary general of PTI, also spoke to reporters on the occasion, and outlined the agricultural policy of the party.

“People call agriculture as backbone but despite resources no government worked on it. We are 40 years behind in Agriculture research,” Tareen lamented. 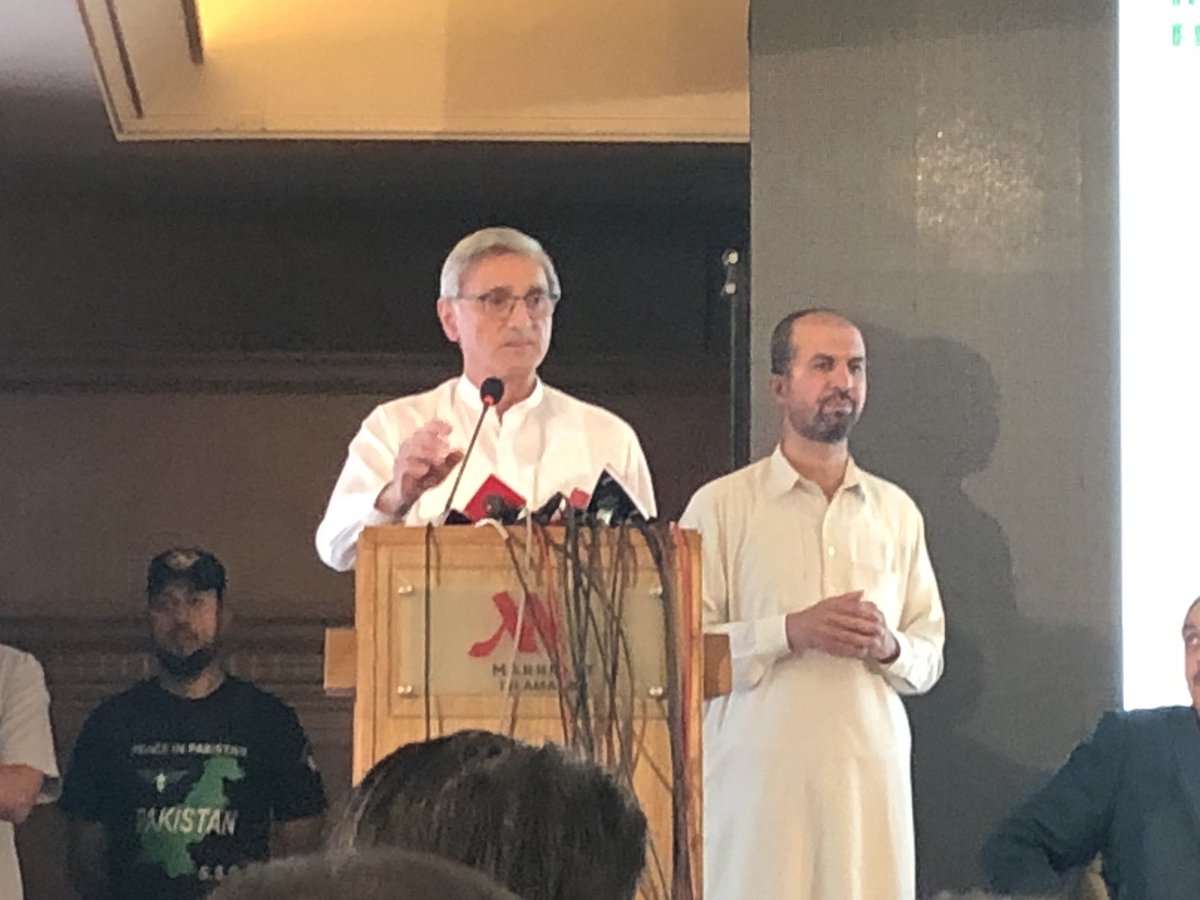 The PTI leader told the media that the party would impose an agricultural emergency to increase farmer profitability, reduce taxes on diesel, encourage a change in crop-mix, and optimize subsidy programs along with other initiatives if elected.

He added that the research gap will be bridged, subsidies taregtted and loans provided to farmers for fertilizers.

"More fruits and vegetable markets will be set up across Pakistan," he said.

KP CM Pervaiz Khattak recalled the party's initiatives and reforms brought in its five-year stint in power in the province.

He promised that important changes to education and health system in the country would be ensured along with an expansion in the social safety net. Khattak announced the Sehat Insaf Card, currently only restricted to KP, would be expanded to the entire country and a total of 8 million families would be provided with income support, up from 5.4m families today under Benazir Income Support Programme.

He also vowed to protect the rights of women and ensure their progress in society. Khattak also said that his party would ensure provision of clean drinking water and begin a tree-plantation campaign.

Following Tareen, Shireen Mazari said that a national security organisation would be formed if her party comes to power. She promised improvements in the economy through a reformed foreign policy and the creation of a detailed national security policy.

She announced that the Ministry of Foreign Affairs would be strengthened by revamping its legal and institutional capabilities.

Shereen Mazari says NAP will be implemented if PTI comes to power. Finally we hear the word "NAP" after ages. It's like we had almost forgotten it. #PTI100DaysAgenda pic.twitter.com/RMO5HAtJXC

Mazari said that the national security policy would focus on uncovering contact between active and inactive terrorists, ensure implementation of National Action Plan, curriculum reforms and bring madrassas (seminaries) into the national mainstream.

The PTI's 100-day plan comes as political parties are preparing for the elections with the announcement regarding the caretaker prime minister and the date of the General Elections 2018 expected soon.