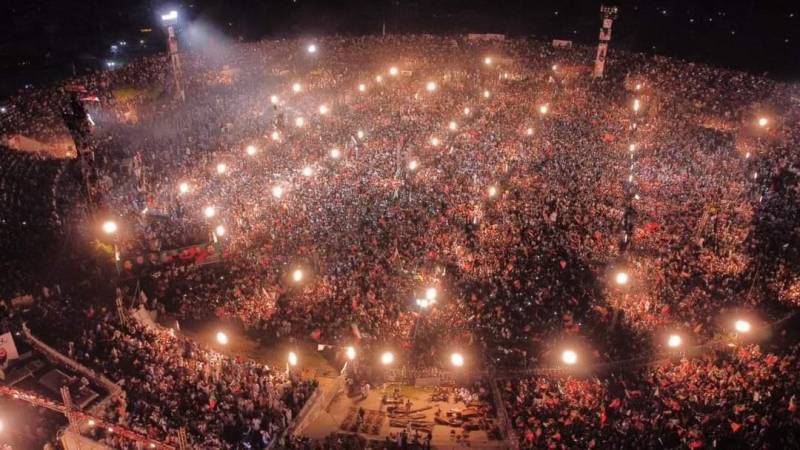 ISLAMABAD – Former prime minister Imran Khan said on Friday the core committee of the Pakistan Tehreek-e-Insaf (PTI) would meet in Peshawar on Sunday and decide the final date for the long march.

Speaking to a huge rally in Multan, Khan said the march could be held on any day between May 25 and May 29. He called for immediate closure of the National Assembly and announcement of a date for elections. Lashing out at the current government for what he said was its inability to govern the country.

Since his ouster as prime minister on April 10, Khan has held a series of large public rallies across the country, terming his ouster a foreign conspiracy and urging the public to prepare for a march to the capital to pressure the authorities into accepting his demand for immediate elections in the country.

Criticising the PML-N-led coalition government, Khan said "they were busy conspiring but now that they have assumed power, they must tell us why they are struggling to govern the country."

"A convict is taking decisions. Sometimes they are asking the National Security Committee to hike prices," he said.

The former premier said his government collected record tax, IT exports surged by 75 per cent during his tenure and Pakistan's employment rate was the highest in the entire sub-continent.

"You toppled our government and now I am happy comparisons are taking place." Khan said if he did not care for the nation, he would wish they [PML-N] stayed in power for more months so that people curse them as well as those "who brought them to power".

He said a wave of inflation is on its way because when rupee depreciates, "it has an impact on everything".

"If they stay in power longer, they will make Pakistan into Sri Lanka. That's why I demand an election date as soon as possible and dissolution of assemblies."

Last month, Khan became the first prime minister in Pakistan’s history who was driven out of power through a no-confidence motion.

Khan took to streets since he was ousted from the PM office. He accused the United States of orchestrating the downfall of his administration with the help of his political rivals.

However, the US officials repeatedly denied the allegation of Imran Khan.

Khan called for early elections in the country and promised to hold political protests until the new government announces the date for the next polls.

Khan previously warned the government that a “sea of people” would arrive in Islamabad on his call.

ISLAMABAD – A former commando of Special Service Group has been appointed as security in-charge of Pakistan ...