ZTE Axon M: The Future is Near 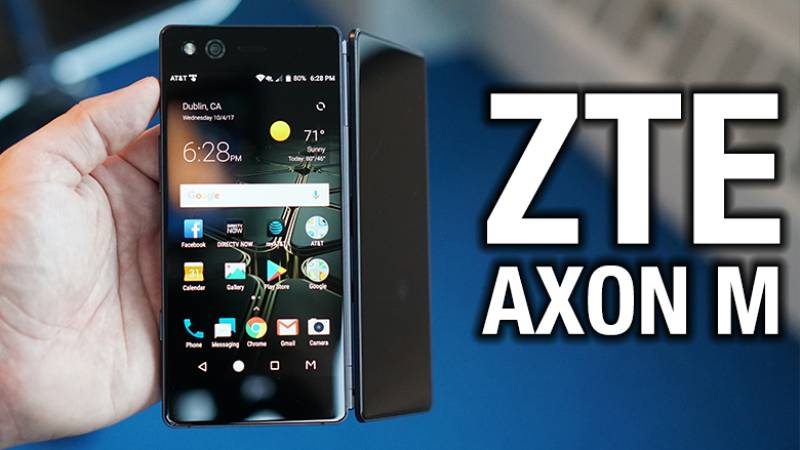 Smartphones these days don’t really offer anything new. Mostly, the hardware is the same that the company used the previous year, or, as in the case of Apple, the same that the company has been using for the past four years. One wouldn’t expect a Chinese brand (a newcomer in retail business) to take innovation to the heights even the giants are afraid to attempt. That’s exactly what ZTE did when it debut the pre-release of Axon M smartphone.

This new Android-powered handheld can go from a normal brick of a smartphone to a twice-the-size flat screen. It’s a folding smartphone. The gadget can literally be rotated to 180 degrees to double the screen size. It’s much like rotating a normal folio cover for your phone, but only half way. When the phone is closed, it looks like a thicker-than-usual smartphone. Both 5.8” displays use Corning Gorilla glass 5, meaning that the phone can withstand 80% of shoulder-height drops on rough surfaces.

A display on both sides allows ZTE pull off another bizarre feature: a single camera for both front and rear. In another departure from a normal phone, this phone changes the display of camera when the view-altering icon is tapped. Axon M’s camera specifications are a 50/50; f/1.8 aperture, 20 mega-pixel camera, EIS (Electronic Image Stabilization), but no OIS (Optical Image Stabilization).

This isn’t the first time a company has tried this radical approach; the Keyocera Echo presented it way back in 2011, but with a much more complicated hinge. As with any dual-displays, there will always be an ugly and thick bezel right in the middle of the screen. ZTE has its own ways of dealing with the bezel dilemma: it invokes the help of software. The Chinese brand has made it so cleverly that one can leverage between four modes; a combined tablet-like canvas, mirrored display on both ends, and multitasking by running two separate apps on each display.

On other counts too, the phone does not follow the usual trends. The Axon M doesn’t have a thin bezel display; it abandons 18:9 aspect ratio, and most of all, it retains the headphone jack.

On the left side of the phone you will find all your buttons; a volume rocker, a camera shutter button, a fingerprint and power key combo button and a sim and SD card tray.

ZTE didn’t announce the price as this is only a pre-release phone. The company did clarify that it won’t be a budget phone, which has been a norm of the ZTE. Here lies the twist though. It may give the game away because Axon M doesn’t have specifications so impressive i.e. Snapdragon 821 (from last year), 4GB RAM, 64 GB storage + MicroSD, 20MP Camera, 3180 mAh battery, FHD 5.2 LCD (x2) and Android 7.12. The weakest spec is the battery, not even enough to run a normal smartphone through a full day, let alone two screens. ZTE has not commented on quick charge option for the device. We’d just have to wait and find out after all: does one really need a fancier flip-phone with two displays?