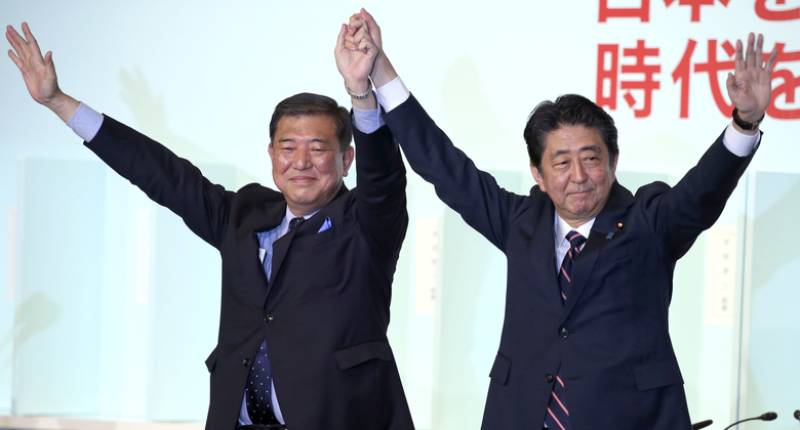 TOKYO - Japanese Prime Minister Shinzo Abe was re-elected as head of his ruling Liberal Democratic Party on Thursday, enabling him to lead the country for another three more years.

In Thursday’s leadership vote, Abe overpowered his sole competitor, Shigeru Ishiba, by securing 553, or about 70 percent of 807 votes.

Statistically, Abe took 80 percent of parliamentarian votes, while support from regional rank-and-file party members was at 55 percent - in line with the expected results.

The decisive victory warrants Abe to pursue his long-sought revision to Japan’s US-drafted pacifist constitution, though the hurdles might obstruct his way.

“It’s time to tackle a constitutional revision, now the fight is over” Abe said in a victory speech.

The elected leader said he’s determined to use his last term to pursue his policy goals to 'sum up' Japan’s postwar diplomacy for peace in Japan.

“Let’s work together to make a new Japan,” he said, trying to enlist the support of public.

Abe has been the prime minister of Japan since December 2012 and he has consolidated his position by enlisting the support of conservatives for bringing stability and continuity to economic and diplomatic policies.

If Abe completes third term, he would become Japan’s longest-serving leader in August 2021.