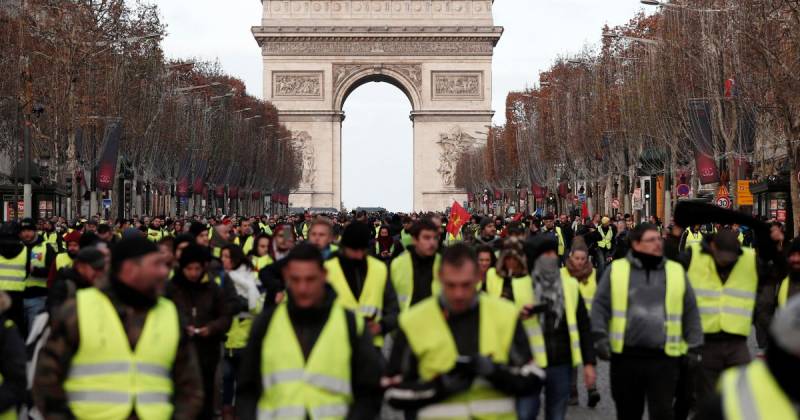 PARIS – The French National Assembly on Friday approved a package of emergency concessions first announced by President Emmanuel Macron in a bid to end the violent "yellow vest" protests.

The tax cuts for low-income workers were put forward by Macron in a televised address earlier this month to help cool weeks of protests that brought major disruption to the country.

The measures provide a "quick, strong and concrete response" to the crisis, said the labour minister Muriel Penicaud in a debate which lasted into the early hours of Friday morning.

The measures include the removal of a planned tax increase for a majority of pensioners and tax-free overtime pay for all workers.

Economists estimate the cuts will cost up to 15 billion euros ($17 billion).

The concessions will now move to the Senate for approval.

PARIS - French authorities on Saturday arrested more than 650 protesters during the latest wave of anti-government ...

Tens of thousands of people joined rallies across France on consecutive Saturdays in a movement which sprung up over fuel tax hikes but snowballed into broader opposition to Macron.

Police this week said they would start removing barricades at roundabouts and on motorways after the demonstrations began to run out of steam.

The protests, which at times spiralled into violence, took a toll on the economy, with businesses counting the cost of supply disruptions, smashed property and a dearth of shoppers and tourists who stayed away from city centres.

On Thursday the president told critics of the fuel tax hikes "you're right" after 1.15 million people signed a petition suggesting several other ways to fight fossil fuel pollution.

"Your message, I heard it. I am responding to you directly, you are right," Macron wrote on the website Change.org.

He reminded the petition signers that his government has cancelled the planned increase in fuel tax and that no hikes in gas and electricity prices would be made during the winter.

While restating that reducing fossil fuels which contribute to climate change was a necessary action, Macron added that it "must not put the problems of the end of the world in opposition to the problems at the end of the month" -- alluding to the anger of the "yellow vest" protest movement about the cost of living in France and the difficulty in making ends meet.

The number of people who have been killed during the "yellow vest" protests since they began in early November rose to nine on Thursday after a 60-year-old man was hit by a lorry at a demonstration next to a motorway near Agen in southwestern France.