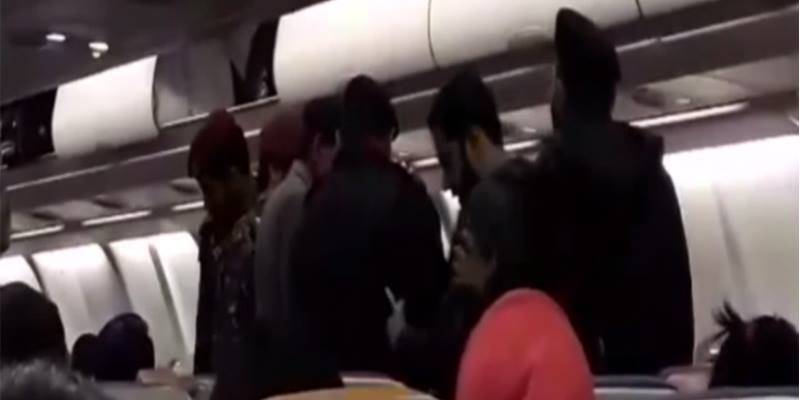 LAHORE - Travelling with other people in a bus or aeroplane means one has to put up with all sorts of people - some of whom may turn out to be extremely rude, and possibly even violent. It also means you need to be considerate of other passengers, and make sure your own comfort does not inconvenience others in any way. If both these conditions are not met, it is possible that the situation can turn extremely unpleasant not only for the people involved, but for other passengers as well.

This is exactly what happened on Thai Airways flight TG345 travelling from Bangkok to Lahore, when a brawl broke out between two passengers after one of them took his comfort a little too far.

According to eyewitnesses, one of the passengers leaned his seat back, without checking the food tray attached to it, which the passenger behind him was still using. This was the kind of situation that could easily have been sorted out with an apology, however the passengers chose not to go that route. The spat evolved into a full-scale brawl, with each party landing punches and hurling choice abuses at each other.

It looked like some of the other passengers enjoyed the show that was on display, and one of them shared a 55 second long clip that shows the two being arrested by the Airport Security Forces (ASF) when the flight landed at Allama Iqbal Airport Lahore, Pakistan.

The eyewitness who shared the footage pointed out a bearded man among the arrested passengers, adding that he was the one who abused and punched the most."

We are trying to reach out to an ASF spokesman for comment, but there has been no response so far.