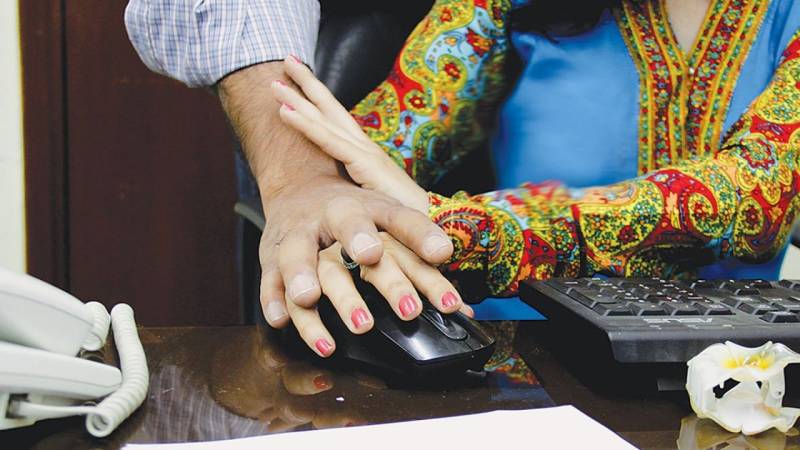 This is not a fair world, I have witnessed myself, that people who do all the hard work are left behind, while those who have good relations with bosses climb up all the stairs. I feel sorry for men at times, hardworking men are often left behind, but ladies who are eye-candy for the bosses get all the perks and benefits. Being a women myself, I am admitting it openly, that yes, we are an unfair society, I have been through this, being offered ‘over night promotion’ in exchange for a night. The personal experience I had made me pick this topic as my research paper, and this is why I am writing about it all.

What can you do in Pakistan, if you are harassed by your boss? Probably nothing. I was doing some research for my thesis which is about reporting harassment, there are laws that prevent workplace nuisance in UK but unluckily, there’s not much you can do if you are being harassed in Pakistan.

Favoritism is found in every single organization in Pakistan, whether government or private. This is why everyone tries to keep good terms with their bosses. This is how corporate culture works, if your bosses don’t like you, you are doomed. Those who fail to make up to their bosses expectations have to face many difficulties in their career. One such difficulty is unwelcoming favors. If you are a good looking female, you will be offered perks and privileges for doing stuff which they will term as ‘normal’. ‘Aisay tou chalta hai yar’ or ‘Aisay hi hota hai yar’ is what you will have to listen before you are being harassed. If you don’t extend physical favors, you are gone and dead. Many who don’t agree to do such favors to get ahead of others are often left behind.

According to an estimate, in 2018, 83% of the women are being sexually harassed at workplace. Imagine the number by now!

At least 83% of Pakistani women report being sexually harassed at the workplace.

This doesn't include 75% unreported cases.

#MeToo
Someone told me she feels guilty for not fighting back, she froze
Freezing is a common response when faced by a forceful predator, it's a defence mechanism along with the fight or flight response

You did fight back, just differently pic.twitter.com/kAz57vVrwU

While I was digging about reported harassment cases, I found two interesting cases. Both of them were reported by government servants. Here this lady writes a thread about how two senior officers harassed new commoners and how these oddballs not just harass ladies in offices, but threatens to spoil their personal lives.

She is right.i also heard abt couple of disturbing cases of harassment on Twitter perpetrated by male officers
Since the young girls on the receiving end chose not to publicly name & shame the perps (or even circulate the ss,) it's not my place to expose their identities either https://t.co/8rn25YaWFb

Another such incident was reported by another female on Twitter, who chose to hide their identity, but mentioned how she was harassed and was offered alcohol, by her boss.

These are just two cases, and there are tens of others which are available on Twitter for your own consumption, but what makes me sad to the core, is how these predators sleep at night, when they have their own daughters at home? People who are posted at senior positions like mentioned by one victim who was harassed by Naseem Khokhar, a senior government official, who was removed from his position because of the allegations. If someone takes a step back, or threatens to tell other employees that their boss tried to harass them, they will have to face the wrath of their employer. Since in government jobs, they can not fire you, but they try their best to threaten you, and to scare you away from far flung postings where you wont be able to see your family for a longer time!

She is right.i also heard abt couple of disturbing cases of harassment on Twitter perpetrated by male officers
Since the young girls on the receiving end chose not to publicly name & shame the perps (or even circulate the ss,) it's not my place to expose their identities either https://t.co/8rn25YaWFb

So here’s what happens when you are harassed at your workplace. If you have faith left in your colleagues and co-workers, you can submit a complain and the inquiry committee will decide who is the victim and who harassed who. Mostly in Pakistani work culture, men are more powerful, so in 90% cases decisions came out against women. So what happens next? Here’s what I love about Kashmala Tariq. She is the federal ombudsman for harassment, and if you are harassed whether you are a boy or a girl, you can always reach out FOSPAH! And the decision taken by Ombudsman can not be challenged at any court, this is pretty nice. Being in UK, this is the only thing I can mention to my university fellows!