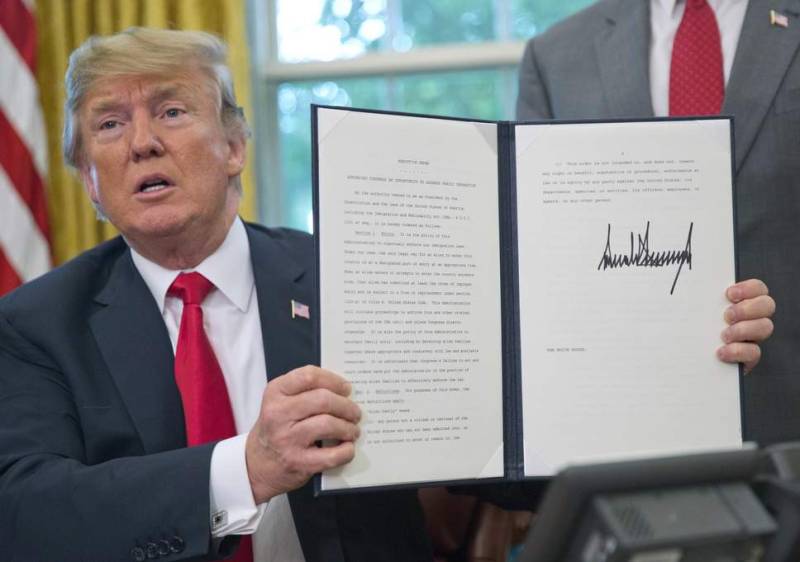 WASHINGTON -  US President Donald Trump has succumbed to global appeals, signing an executive order promising to "keep families together" in migrant detentions.

Trump retreated on his policy on Wednesday amid international fury over the separation of undocumented parents and children, saying he had been swayed by images of children who have been taken from parents while they are jailed and prosecuted for illegal border-crossing.

"It's about keeping families together, I did not like the sight of families being separated," Mr Trump said at the signing ceremony but hastened to add that  the administration would continue its zero tolerance policy of criminally prosecuting anyone who crosses the border illegally.

The tycoon-turned-president had insisted he was legally bound to split the children from their parents and that only Congress could resolve the problem but now he has shifted the policy, earning rare praise from global community.

'We want security for our country and we will have that — at the same time, we have compassion, we want to keep families together,' he asserted.

According to the executive order, the Department of Homeland Security instead of Justice and Health and Human Services Departments has been entrusted with continuing responsibility for the families.

It also suggests the government intends to hold the families indefinitely by challenging an existing settlement that places a 20-day limit on how long children, alone or with their parents, can be detained.

Besides the global push, the president said his wife, Melania, and daughter, Ivanka, "feel strongly" about ending the practice of separating migrant families.

'I think anybody with a heart would feel very strongly about it,' he noted at the ceremony attended by Vice-President Mike Pence and Department of Homeland Security Secretary Kirstjen Nielsen.

Despite the reversal, the children already separated will not be enjoying the privilege, though the administration might be pressed to look into the matter.

US immigration officials say 2,342 children were separated from 2,206 parents between 5 May and 9 June, a development that not only riled the global leaders but the human rights activists and celebrities across the world.