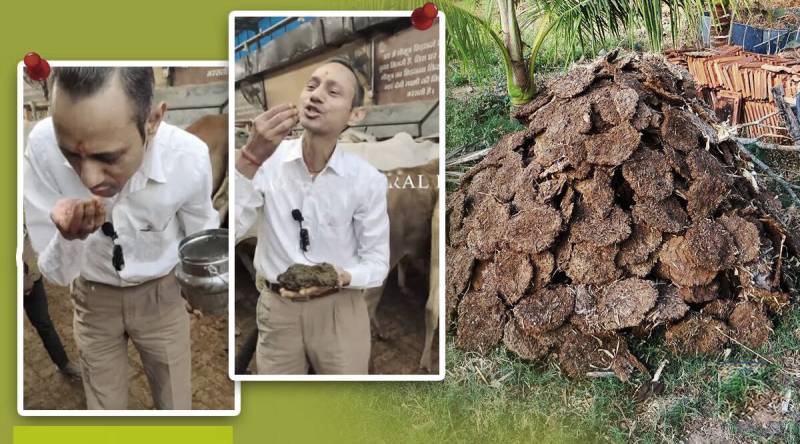 NEW DELHI – As Indian Hindus advocated the use of cow waste to boost immunity, a video has surfaced on social media in which a doctor spotted eating raw cow dung claiming it has properties to 'purify one's body and even keep blood pressure problems at bay'.

In the viral clip, the Indian doctor who is identified as Manoj Mittal can be seen picking up the cow dung from the ground and gobbling it straight into his mouth.

The man who introduced him as a medical professional explained the benefits of eating feces of bovine animal species and further went on to talk about the benefits of drinking cow urine. The man in the clip added that every part of Panchagavya [a concoction of cow dung, urine, milk, curd and ghee] obtained from the bovine is helpful for mankind.

Dear Doctors of Twitter,
I present you this gentleman!pic.twitter.com/YtFHGo9cQH

Mittals further mentioned that even touching on the animal’s back has many medical benefits, while saying that women should eat cow dung for normal delivery of children.

Meanwhile, the video garnered hilarious reactions as netizens wonder how a medical practitioner could believe in such things.

Bizarre claims about the benefits of cow urine and cow dung on social media by people, including BJP leaders, are not uncommon as, amid the catastrophic situation of Covid in the second-most populous country, a Covid care center was formed inside a 'gaushala' to 'treat' Covid positive patients using cow urine and dung beside organic dairy products.

NEW DELHI – In a country where millions are getting infected in a week time and the total cases have surpassed 22 ...

There's no scientific evidence proving the benefits of consuming cow dung to ward off viruses and instead it can add further difficulties, doctors said.

In the BJP led government, there is even a journal called Indian Cow and a Love 4 Cow Trust to ‘propagate and promote love’ for the four-legged animal. A right-wing Hindu organisation has also launched cosmetics using cow urine and dung.

NEW DELHI – India is set to hold a nationwide ‘cow science’ exam next month to promote the ...