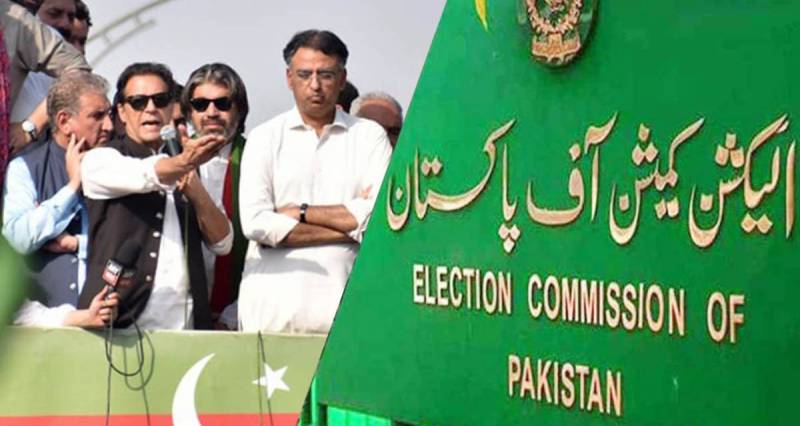 PTI chief, who has been disqualified from holding public office, will no longer be able to retain any of his seats including the one he currently retains.

The four-member bench of the electoral watchdog announced its verdict in the Toshakhana reference filed against the defiant politician.

ECP, in its verdict, also mentioned that criminal proceedings will be initiated against PTI chief for misdeclaration.

Former information minister Fawad Chaudhry called it shameful and an attack on the country's law. He said ECP's verdict is a slap on the face of Pakistani people while urging supporters to come out on the streets to record their protest.

Fawad pointed out that several cases against Nawaz Sharif and Asif Zardari are pending and were not being heard in the ECP, saying Imran Khan is the only target of ECP.

He also called on masses to come out for their rights and protest, adding that this is the beginning of a revolution and claiming that the entire Pakistan reject this decision.

The country's former finance chief Asad Umar also slammed ECP, saying the decision will be challenged in the high court. We are prepared for this, and the petition is ready to challenge this, he said.

Asad further warned that whoever is dreaming about 'minus Imran Khan' is living in a fool's paradise.

PTI leader Shafqat Mahmood said October 21 a 'black day' for Pakistan. History will remember this commission as anti-people and a handmaiden of looters and plunderers, he said.

Imran Khan's close aide Shahbaz Gill said former PM Nawaz Sharif authored the verdict, which according to Gill was read out by one of his 'worker'.

Senator Faisal Javed and other leaders condemned the act, saying the party would challenge the ECP verdict in court.

In what is said to be a major victory for the ruling alliance, the ruling Pakistan Muslim League (N) welcomed the verdict.

In a tweet, the daughter of the former PM said Pakistan's first 'certified liar and thief' was disqualified with irrefutable evidence. Firing fresh salvo, she said Imran Khan his wife [Bushra] looted the state treasury.

She also called for Khan's arrest, saying the looted money should be recovered from the defiant politician.

Security beefed up in capital

Earlier in the day, strict security measures were taken by the capital administration ahead of the verdict announcement.

The Election Commission of Pakistan earlier reserved its verdict last month in a reference seeking disqualification of the Pakistan Tehreek-e-Insaf chief for not declaring gifts he got from the state gift repository.

Earlier, the electoral watchdog, in this regard, directed all the relevant parties to appear before it at its secretariat in the federal capital.

As the Sharif-led ruling alliance predicted the disqualification of a defiant politician, ECP approached the district administration for fool-proof security at the time of the decision, as PTI activists might storm the office.

The development comes on a reference filed by PDM, a coalition of political parties, seeking the disqualification of Imran Khan.

PML-N lawmakers Barrister Mohsin Nawaz Ranjha had argued that the PTI chief is no more Sadiq and Amin as he failed to declare the gifts received from Toshakhana.

In the previous hearing, Khan’s legal counsel Barrister Ali Zafar told ECP that his client had sold at least four presents he had received during 2018-19.

When a member of the top election body inquired about the source of income used to buy the gifts from Toshakhana, the lawyer avoided sharing the details but revealed that the former premier received gifts worth Rs1.7 million during 2019-20.

He said that the details of the gifts received by Imran Khan as premier till 2021 have been provided in the written reply. Barrister Zafar said that the income generated by selling the gifts has been declared his client’s income tax returns. He said that tax was paid on an income of Rs58 million.

Earlier in 2021, the Toshakhana case surfaced after an independent and autonomous enforcement body, accepted an application on the matter and directed the Cabinet Division to provide information about the gifts received by former PM Imran Khan from foreign dignitaries.

Cabinet Division however challenged the PIC order, claiming that it was illegal. The ousted government had taken the position that the disclosure of any information related to Toshakhana will disrupt Pakistan's relations with friendly nations.