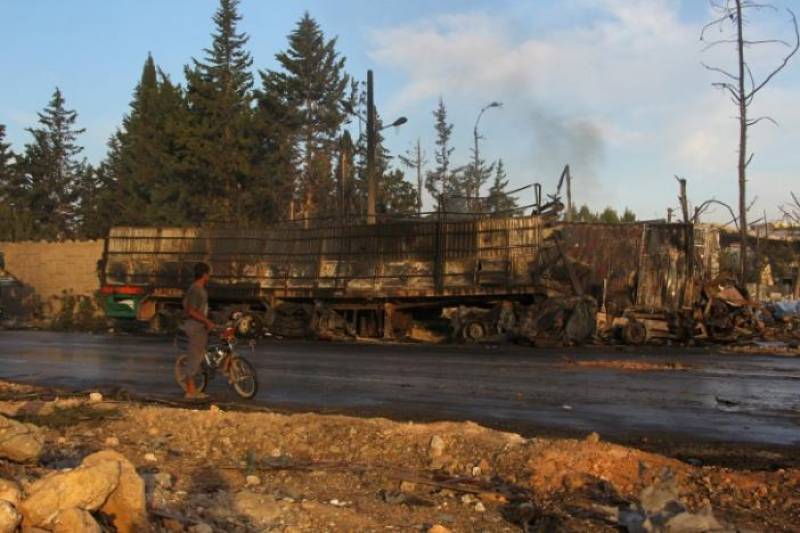 ALEPPO - Russian and US diplomats are struggling hard to save the Syrian peace truce following the military leaderships of the two sides blamed each other for ceasefire violations in the war-hit country.

The US officials on Tuesday said they believed Russian had targeted an aid convoy near Aleppo on Monday. 18 trucks out of total 31 vehicles carrying aid goods were left completely destroyed in the attack.

At least 20 civilians were also killed and as a result the United Nations suspended all of the aid shipments into Syrian cities.

With reference to intelligence information, the US media reported that two Russian Sukhoi SU-24 warplanes were in the skies above the aid convoy at the exact time of the attack.

A spokesman for Moscow, on the other hand, rejected the allegation, saying tha US had no evidence to back the claim. "We have nothing to do with this situation," the statement added.

The ceasefire agreement became effective on September 12 after US Secretary of State John Kerry and Russian Foreign Minister Sergey Lavrov agreed to give aid workers enough time and space to reach the civilians in different cities.

The truce received first serious blow when US jets "mistakenly" hit Syrian troops, killing at least 80. The incident attracted severe criticism from Russia, which termed it as an American effort to help to help the Islamic State militant group. The ceasefire, however, remained intact.