'In Pakistan, you are in safe hands,''Jawaher Al Qasimi tells women refugees

'Every child in the world deserves the best start in life; it can only be enabled by a good education' 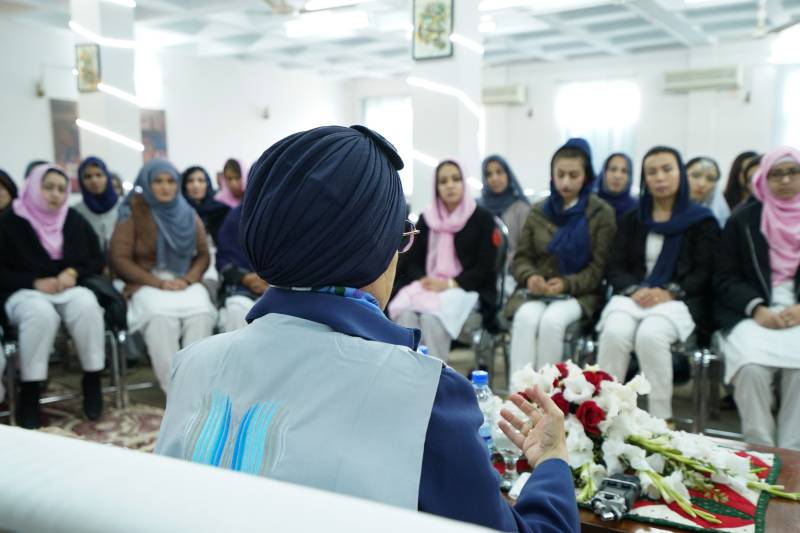 ISLAMABAD – Sheikha Jawaher bint Mohammed Al Qasimi, Chairperson of The Big Heart Foundation (TBHF) and Eminent Advocate for Refugee Children at UNHCR, has called on governments and civil society organizations to treat the education of the low-income and crises affected communities as a priority.

Al Qasimi noted that the protection of children’s dignity and enabling them access to high-quality education and wellbeing should be the starting point for development and advancement programmes globally. Otherwise, the world’s developmental march would generate substandard results, she asserted.

The visit entailed meetings with senior officials and staff of several educational and childcare institutions that target low-income families in the cities of Islamabad and Lahore, and were set up to gain comprehensive insights into the current status of services and care being offered to young refugees and children from low-income families. During the meetings, she highlighted support mechanisms that need to be adopted by local and international stakeholders to align the design and delivery of services with children’s educational and welfare needs.

Al Qasimi at Master Ayub School, Islamabad: Educating children is an investment in our future

Since 1982, Ayoub has been offering open lectures and lessons to students from low-income families in an open public park square in the capital. A former fireman, Ayoub founded the school to alleviate the exacerbating problems in Pakistani communities, which resulted from child abuse, exploitation and crime. 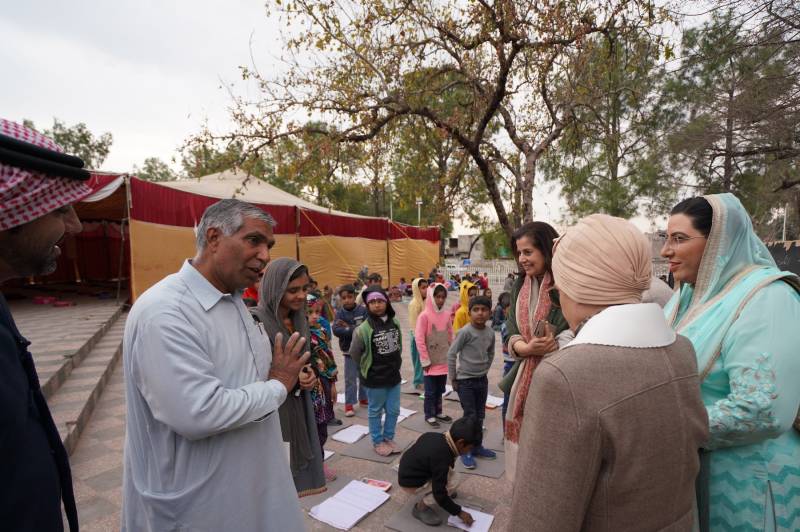 Sheikha Jawaher has lauded Ayoub's efforts and undulating determination to help the segments of community who have dismal or no access to resources, saying small initiatives like these led by unsung heroes like Ayoub, make the biggest difference to society.

"Education symbolizes hope for both individuals and societies, as it equips us with the power to overcome the biggest odds, bridges the development gap between nations, and makes every educated induvial an equal partner in giving. Children’s education specifically is a basic human right, like the right to live. Education empowers our children with dignity, knowledge and empathy. It is a tool to shape positive personalities who denounce hate and racism, and contribute as changemakers by accelerating conflict resolution and bridging socioeconomic disparities between societies. It is also the foundation of national development and global coexistence. This simply means that by educating our children, we are investing in our future,” Sheikha Jawaher noted.

“Every child in the world deserves the best start in life; it can only be enabled by a good education,” she further asserted.

Today, Ayoub’s alumni of young men and women help Mohammad graduate hundreds of students from the school annually. The founder aspires take his 37-year project to the next level by putting a roof over the children’s heads, so education can continue enriching their lives despite weather disruptions.

Sheikha Jawaher visited The Citizens Foundation, one of Pakistan’s leading non-profit organizations in the field of education for the less privileged. Set up in 1995 by a group of citizens, the foundation has 1,567 schools catering to the neediest in cities and villages, where it has nearly 250,000 students, from Grade 1 – 10. The foundation boasts an all-female faculty of 12,000 employees and a 50 percent student gender ratio.

Stressing on the need for a stronger push by governments and civil society organizations to educate the girl child in low-income communities, Sheikha Jawaher Al Qasimi opined: “Educating girls is one of the surest ways to overcome socioeconomic challenges, ensure continued prosperity of families and secure the future of the next generation. Parents, therefore, need to know that they must replace their aspirations to marry their young female children early with education. Knowledge is a source of strength for women, and a pillar of society. By educating girls, we set them up for success – at home, in marriage, at work, in society.

Sheikha Jawaher added: “We need to change the perception of girls in impoverished or low-income communities that their rights can be compromised. No, their rights or their needs do not come in second place. It is upon us to build their self-esteem; to empower them to demand for their right to be educated. Nations worldwide need educated, confident women who know that their talents, energy and capabilities are pivotal to growing and nurturing their communities.

“International efforts in providing education to children around the world, mustn’t fall short if we are all truly committed to achieving the United Nations’ Sustainable Development Goals (SDGs). Many are still deprived of basic education even though ‘Quality Education’ is number 4 on the list of 17 Goals. The aim is for all countries to work together to ensure no one is left behind, and we must do everything we can to improve the planet and the lives of all its citizens by 2030.”

She pointed out that during her visit to Pakistan, she met exemplary individuals who brought a passionate and professional approach to children’s education. Pointing to these inspiring men and women, Her Highness asserted that they were a clear indication that each individual in the world can do more to help safeguard the rights of less fortunate children. 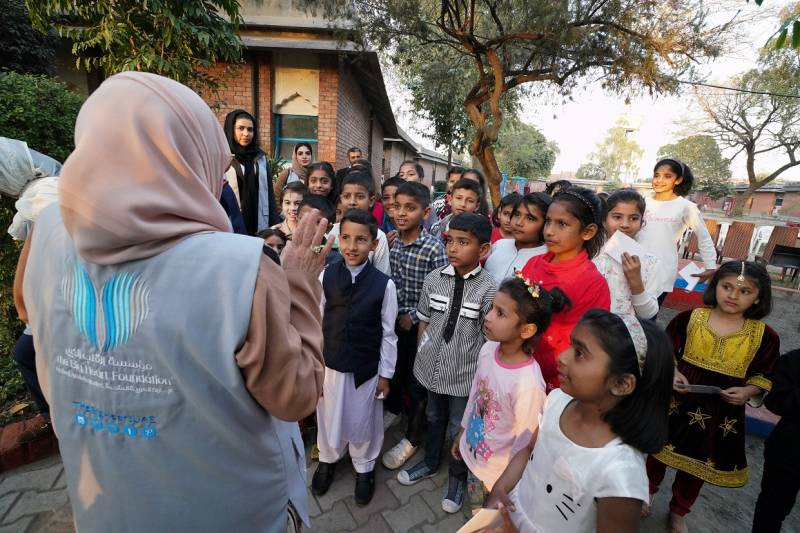 She also visited the Pakistan headquarters of SOS Children’s Villages – a national branch of the world’s largest orphaned child charity, which has been working with children and their families across the country since 1975. During meetings with the non-profit’s officials, Sheikha Jawaher gained insights into their project planning and delivery mechanisms, how the various branches cooperate, heard about the challenges they face in their pursuit to provide education and care to completely or socially orphaned children.

Sheikha Jawaher pointed out that the work done by the SOS Children’s Villages network in Pakistan and around the world is allowing less fortunate children a fair chance in life to be loved, valued and enabled to become productive citizens contributing fully to their communities and the world.

She lauded these noble efforts and has urged more active participation of the international community to launch initiatives and support existing programmes that aim to give orphaned children an environment that gives them a solid foundation on which to build their lives. 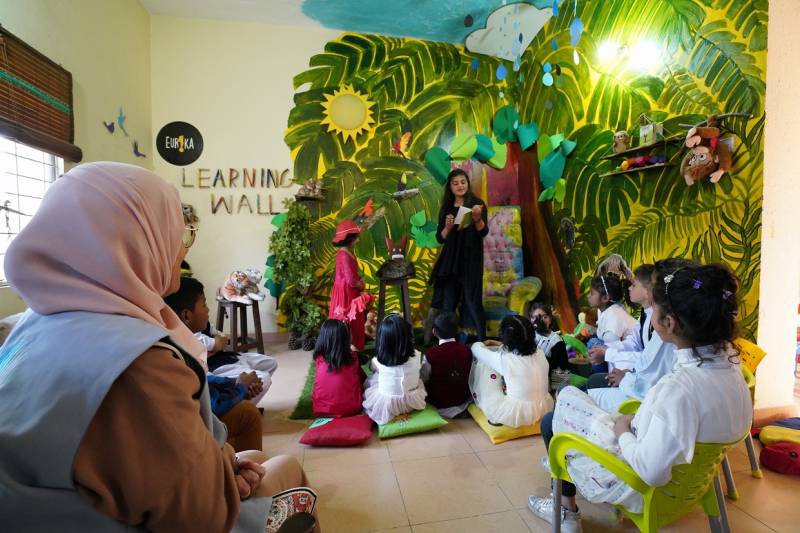 She concluded the comprehensive six-day tour with a visit to Women Welfare Centre in Islamabad where she was received by the board of directors, UNHCR representatives, girls and trainees. The centre was established in 1973 as a response to the war in Afghanistan, to support the persecuted who fled their homes and arrived in Pakistan in search of security.

The center offers skills training to around 3,500 Afghani female refugees. The numbers are expected to reach 5,000 in the upcoming semesters as the centre targets over 25 different vocational fields. 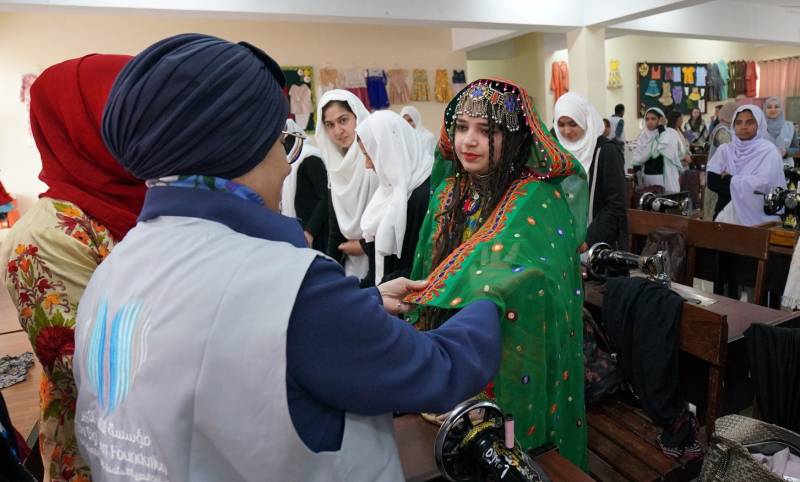 During a tour of the facility, Sheikha Jawaher complimented the talents and expertise of the trainees, noting that their artisanship and professional know-how is enabling them to make products that meet international standards. She called on institutions and the local, regional and international entities to create greater access and new market opportunities for these products.

At the end of the visit, she thanked the Pakistani government for showing exceptional generosity to Afghani refugees for 40 years, and hailed their continued care and support to them without prejudice. Sheikha Jawaher told the women at the centre: “In Pakistan, you are in safe hands, and we hope everyone who wishes to go back to their homes are able to so, soon.”