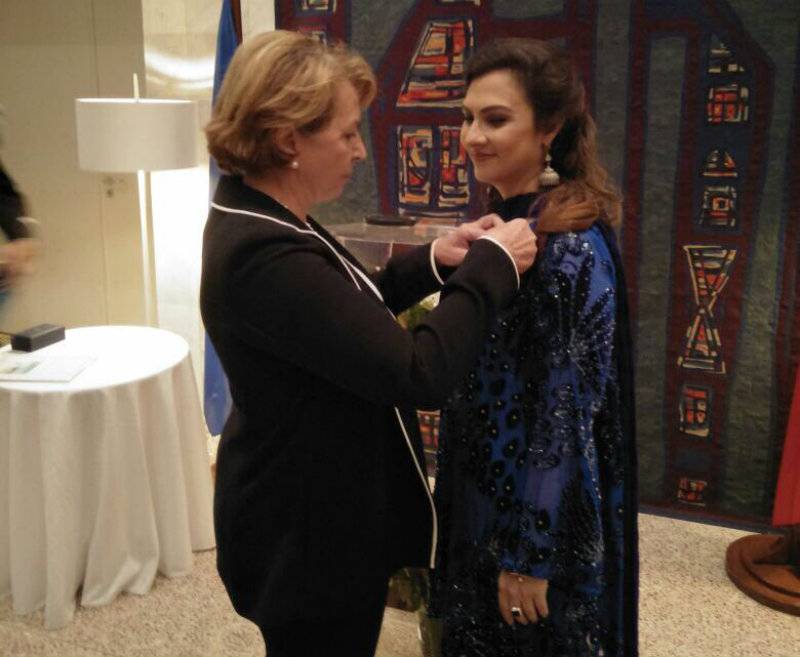 French Ambassador to Pakistan Martine Dorance presented the award to Memon in a reception held at the French Residence yesterday.

ISLAMABAD - It has been a tough ride for the ruling Pakistan Muslim League which is nearing the completion of its ...

Federal Ministers Balighur Rehman and Khurram Dastgir, and Foreign Affairs Adviser to the Prime Minister Sartaj Aziz were present at the ceremony, among others.

Tonite on my 45th i am humbled to receive one of the highest civilian awards from France and the French President @EmmanuelMacron. Merci! pic.twitter.com/JQgcqmGtcC

“The National Order of Merit is an order of the State awarded by the President of the French Republic, which was launched in 1963 by the President Charles de Gaulle to reward French and foreign nationals for their distinguished achievements,” according to a press release.

The French award is conferred not just on French nationals but also foreign individuals for their achievements.

Memon spent her childhood in France and attended secondary school there.

Moving ceremony at the French Embassy awarding one of the highest distinctions "Ordre du Mérite" to @marvi_memon Congratulations ! pic.twitter.com/nfLeuoD8tA

She has been elected to the National Assembly twice - in the general elections of 2008 and 2013. Memon took charge as the chairperson of the BISP social welfare scheme in February 2015.

Thanking French President Emmanuel Macron, Memon talked about similarities in the struggles of Pakistan and France in dealing with terror attacks. "France has emerged on the international scene as a forceful voice for the oppressed and marginalised," she said in her speech.

"It would be no exaggeration to say 'poverty has a woman's face'," Memon added, highlighting BISPs efforts for poverty alleviation in Pakistan.

Pm not resigning and we wil win hearts n minds n all come what may ?sherrrrr. pic.twitter.com/6nh5Xxw7K0

"Prime Minister not resigning and we will win hearts and minds and all come what may," she later tweeted with pictures of the ceremony.