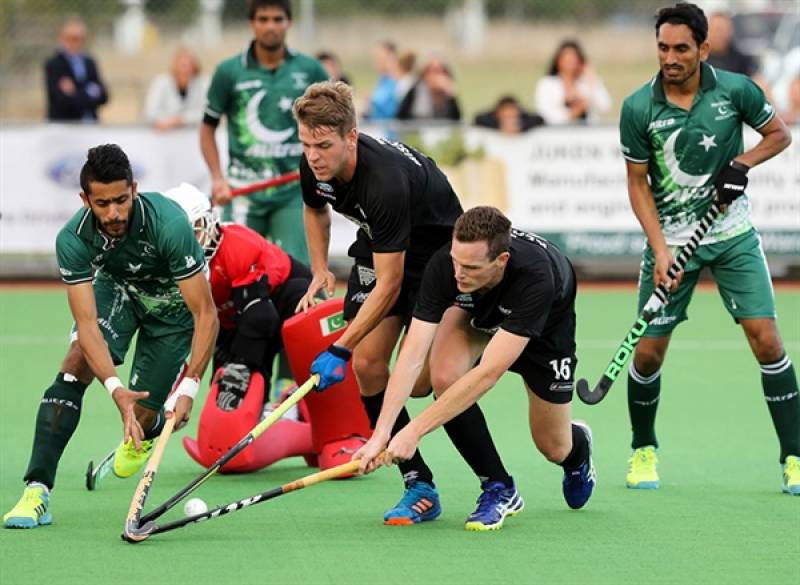 Hasim Khan, skipper Green Shirts, scored both the goals and led from the front with a first half double as the New Zealand men went down 2-1 in front of a vocal crowd at the Trust House Hockey Wairarapa complex.

Pakistan started the brighter of the teams with Haseem Khan striking an early lead after 10 minutes before Jonty Keaney drew the Kiwis level with his first international goal in just his third test.

The Black Sticks exploded to life with a goal one minute into the second quarter, after Keaney finished off a strong attack following a lung busting run from Harry Miskimmin leading to the well taken goal in a scrap at the Pakistan goal mouth.

However, Pakistan reclaimed the lead seven minutes later with a second goal from Haseem Khan, taking a 2-1 lead into halftime.

The Black Sticks had their chances to equalise but couldn’t find the finishing touch.

Their closest chances were in the third quarter, after a sprawling dive from Stephen Jenness saw the ball rolling just past the outside post with the Pakistani keeper left stranded.

New Zealand almost scored again just seconds before the end of the third quarter but a great save from Pakistan keeper Mazhar Abbas tipped a rocket of a shot over the bar.

Despite some late pressure and the crowd cheering the hosts on, a goalless second half ensured the score remained 2-1 at fulltime.

Pakistan will play against New Zealand at the International Hockey Stadium, Wellington on March 17, 18, 20 and at Trust House Hockey, Wairarapa, Clarenville on March 22 and 23.

In Australia, Pakistan will play tests at Marrara Hockey Centre, Darwin on March 28, 29, 31 and April 1.