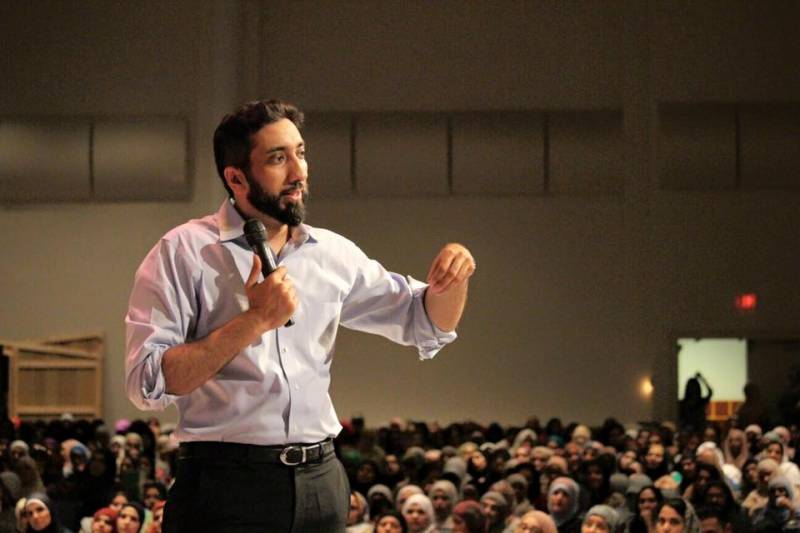 DALLAS - In an untoward development, renowned Muslim speaker Nouman Ali Khan has been accused of making inappropriate advances toward his female followers, here on Friday.

The allegations against the popular American speaker were hurled by Omer M. Mozaffar who claims to be a friend of the speaker for the last twenty years.

In a detailed Facebook post, Mozaffar claimed that he was working on a case related to Nouman Ali Khan in which the scholar confessed to having made inappropriate interactions with various women.

Mozaffar expressed that apart from confession, the speaker told lies and also threatened multiple parties to further hide his misconduct although he was advising him to seek repentance and reform himself.

Mozaffar also claimed that when the matter heated up, the local scholars of Dallas intervened and started investigating the matter with Mozaffaffar as arbitrator.

The investigations also included family members of Nouman who also admitted to "some of the accusations, though the evidence was worse," claimed Mozaffar.

Moreover, as investigations continued, Nouman met the scholars and agreed to stop public speeches and stop contacting all the women until further notice.

The adjudicator Mozaffar was assigned the responsibility to keep an eye on Nouman who allowed him to post previously recorded lectures, so long as they were not about marriage or gender matters.

The developments in this case were also communicated to Muslim community leaders so that no one should become a victim at the hands of the scholar.

Mozaffar stated that the victims were also informed about an organisation that dealt with matters related to abuse and were encouraged to utilise all legal channels for justice.

According to Mozaffar, he also got in touch with a mutual friend to make sure that he was not hurling shaky allegations, however, as the interrogation continued, Nouman started to hit back with allegations that a campaign was being run against him by the Dallas-based scholars.

Mozaffar further claimed that now Nouman was sending threats against each of investigators through his attorney, however, he reiterated that 'predatory behaviour against these students and conference attendees should be neither tolerated, nor replicated, nor ignored'.

Mozaffar also quoted references from Islamic principles and the life of last Prophet (Peace be Upon Him) to affirm that faith comes from God and not from a charismatic leader.

Although Nouman has not responded to the scathing allegations publicly, what adds weight to the observations of Mozaffar is the fact that Director of Religious Education and Social Services at the Islamic Information Society of Calgary, Navaid Aziz also substantiated the claims while confirming that the allegations against Nouman have been verified by multiple people, and some of them have even been confessed by him.

Aziz, through a Facebook post, stated that the details regarding the scandal were the "right" of the victims and they would be shared.

The speaker maintained that Islam did not revolve around the personalities and 'your Imaan should not plummet because of such shenanigans'.

The official also confirmed that no one wanted to air the details of this episode, however, Nouman breached a contract and it was necessary to make the allegations public in a bid to protect women members of the community.

Navaid Aziz also clarified that a single case against the said speaker should not be utilised as a tool to malign all the Muslim public figures as those who did not commit mistakes should be held in high-esteem and learned from.

The scholar has yet to confirm or refute the allegations, however, social media buffs were left in utter disbelief and shock over the information recently released about the scholar.

A letter narrating the accusations and action of leaders on Chicago Muslim community in response to it was widely shared on social media:

Assalamu Alaykum,Dear fellow Muslims.I hope you receive this letter with the best of health, Iman, and integrity.

Ours is a deen that focuses on justice. If teacher falls, the Deen continues, the Rahma of Allah continues. When your heart breaks and you feel your faith is shaking, you turn to Allah to rebuild yourself. If you walk to Allah, Allah comes to you with speed. In this world we will be hit with news that shakes our hearts; in those moments we turn back to Allah again and again, for He is the dispenser of good and guidance. It is ithe model of our beloved Prophet, may the peace and blessings of Allah be upon him, that we persist with the determination that help will come, even if we do not know when.I have been working on a case regarding my friend of twenty years, Nouman Ali Khan. He confessed inappropriate interactions with various women, violating agreed-upon bounds of Islamic law. He also told lies to cover up those relationships, and filed threats of litigation against multiple parties to further hide his misconduct. I am calling on him to focus on repentance and reform. He is jeopardizing his soul and reputation; he is tampering with the Iman of so many of the students of his courses and lectures. Nouman, you are burying yourself. When rumors spread of possible indiscretions by Nouman, the local community of Dallas scholars investigated the matter to protect possible victims and to work toward justice and community healing. The scholars would not tolerate misconduct by Muslim preachers. Most of the Muslim community across the globe know the rumors; I will not repeat them here.I was asked to mediate the situation in Dallas between Nouman and the scholars because of my experience in similar previous cases, as well as my longtime relationship with Nouman. My approach is to regard the accusers as speaking the truth while still regarding the accused as innocent. Even if any interactions are between two consenting adults, they are not of even stature: the famous preacher has the upper hand, and almost no Muslim preacher in the globe is as famous as Nouman. Thus, it is vital to make sure the victim is given attention and necessary personal and professional support.

I investigated the extensive evidence. I permitted one of his family members to support and advocate for him. He admitted to some of the accusations, though the evidence was worse.

In a meeting with the above scholars and myself, Nouman agreed to stop public speeches until further notice, to get professional and religious counseling, and to cease all contact with those women. I had the responsibility to determine when he would be ready to speak again. I gave him an exception, allowing him to post previously recorded lectures, so long as they were not about marriage or gender matters. Likewise, it was the responsibility of our team to inform the Muslim community leadership of Dallas and the nation, in order to protect anyone else from becoming a potential victim. Leaders and scholars across the nation were informed immediately, free to spread the news. The evidence was also shared with an organization that specializes in providing services for victims in the Muslim community experiencing abuse and neglect at the hands of religious leaders. We urged those who came to us who claimed that they were wronged by him to seek justice through all legal means available to them and to warn those close to them in order to protect the community from his harm.

I consulted a mutual friend of Nouman and myself to make sure I was not misstepping; the work of community safety and justice requires tremendous deliberation, care, and prayers. As things progressed, Nouman accused me of lying about our efforts and asserted that scholars were on a campaign to ruin him. This was obviously incorrect; there is no campaign and Nouman is not the victim here. The scholars were seeking to protect the community and to protect him from himself. The Prophet, may peace be upon him is reported to have instructed us to help the oppressed and the oppressor. We understand helping the oppressed. We help the oppressor by preventing him from further injustice.

This brings us to where we are today. Nouman has now broken his agreement with us and has been sending threats against each of us through his attorney. Such threats are nothing less than attempts to stop our work of protecting the community; those working with him should be ashamed of themselves. We serve Allah, not our worldly interests. Thus, this call is essential for the well-being, safety, and education of young men and women around the world who learn from community leaders and scholars. This predatory behavior against these students and conference attendees should be neither tolerated, nor replicated, nor ignored. The failures of one preacher do not mean that the entire Tradition is suspect. But every preacher, scholar, and activist should know that if there is evidence that your behavior is illegal or detrimental to the community or society, you will be outed. If possible, we will work with you toward rehabilitation Insha Allah. I expect the same against me if I lose my way, a’udhubillah.

Faith comes from God. Faith does not come from a charismatic lecturer. Hold tight to the Book of Allah, and to the way of His Messenger, may peace be upon him. Pray for all of us, starting with the victims. To those of you who, as a result of such behaviors by preachers are struggling with faith, we are here to serve you to help you to turn to Allah.

To the Muslim scholars, preachers, and community servants across the globe, we have an enormous responsibility to help the community members cultivate their Deen. We have an enormous responsibility to stand up for justice, even if we have to go against our own selves or our own friends. We must renew our intentions in our own service to Allah, knowing that the accursed devil is a relentless enemy against each of us.

Our scholars are and continue to be the inheritors of the Prophet, may peace be upon him, as well as the custodians of the Traditions. As we know, the Prophet, may peace be upon him, and his family, may Allah be pleased with them, were subject to much worse. And, despite the struggles, Allah’s Tradition continued, and it will continue. All of us will face the Divine on the Day of Judgment, where the only wealth will be our good intentions and Allah’s mercy. We are at your service. May Allah accept our efforts and our repentance.

May Allah bless you.

Nouman Ali Khan....omg. This is disappointing. I was not a fan of his but for him to do what he's accused of.... :/ incredibly sad.

Nouman Ali Khan... known to be one of the best scholars of our time. And then this happens. SubhanAllah.

Nouman is the founder and CEO of Bayyinah Institute, as well as the lead instructor for a number of Bayyinah courses including the ‘Fundamentals of Classical Arabic’ and ‘Divine Speech’.

His first exposure to Arabic study was in Riyadh, Saudi Arabia where he completed his elementary education. He continued Arabic grammar study in Pakistan, where he received a scholarship for ranking among the top 10 scores in the national Arabic studies board examinations in 1993.

But his serious training in Arabic began in the United States in 1999 under Dr. Abdus-Samie, founder and formal principal of Quran College, Faisalabad, Pakistan who happened to be touring the US for intensive lectures in Tafsir and Arabic studies.

Nouman served as professor of Arabic at Nassau Community College and has taught Modern Standard and Classical Arabic at various venues for nearly 7 years with over 10,000 students nationwide.

Currently, he is involved in a seven-year-long project, of conducting a linguistic & literary focus Qur’anic Tafseer series in English.

He is also an admirer of famous Pakistani scholar Moulana Tariq Jameel who visits him occasionally.