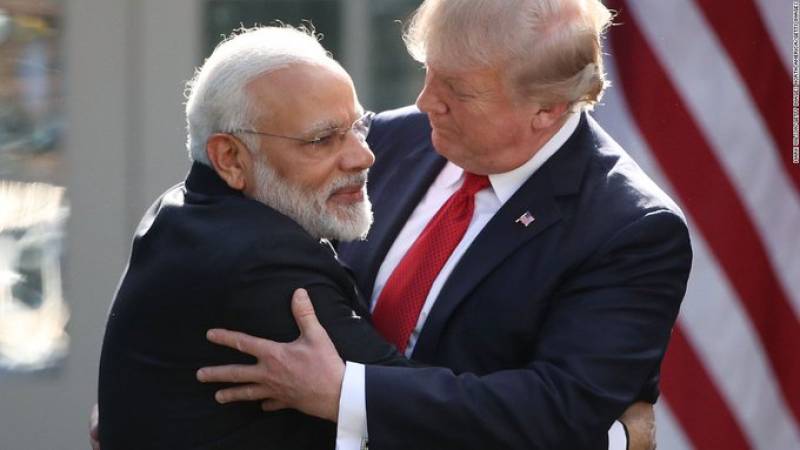 WASHINGTON – US President Donald Trump and Indian Prime Minister Narendra Modi are to make a joint appearance on Sunday before a huge crowd of supporters in Houston, Texas.

The gala event, titled "Howdy, Modi!", will be held at the NRG Stadium.

Modi is expected to address the Indian diaspora as part of his week-long visit to the United States.

Modi flew to Houston on Saturday. His trip is timed to the UN General Assembly, which opens in New York on September 24.

The Indian leader's agenda includes talks with Trump on the UN sidelines and other bilaterals as well as a meeting with US lawmakers and a round table on Sunday with chief executives from 16 US energy majors.

Meanwhile, normal life remains disrupted in the occupied Jammu and Kashmir due to continued military lockdown on 49th successive day.

Millions of people have been besieged in their houses as hundreds of thousands of Indian troops continue to be deployed in every nook and corner of the valley since the hardline Hindu government of Modi-led BJP stripped the disputed state of its special status on August 5.

The people are facing immense problems due to continued suspensions of communications means including internet and mobile phone services.

Delhi’s move to annex the Occupied Jammu and Kashmir has sparked widespread protests across the world, with more than sixty nations condemning the controversial legislation.

SRINAGAR - A teenage boy has lost his life after being subjected to inhumane torture by Indian troops at an army camp ...

Human rights organisations are expected to draw thousands at the 'Howdy Modi' rally, aiming to raise awareness of alleged violations in Indian-administered Kashmir, as well as other parts of India, including Assam state.

In the United States, Kashmiris, Khalistan activists and their sympathizers will hold anti-India protest demonstrations and rallies in Houston, Texas today (Sunday) on the occasion of Indian Prime Minister, Narendra Modi’s visit.

Kashmiri and Khalistani activists have already made their presence felt with a dress-rehearsal of tractor-trailer trucks decorated with flags and protest signs.

The march which started from Sikh National Centre in Houston culminated at the NRG Centre, the venue of the Indian Prime Minister’s public gathering.

ISLAMABAD – Prime Minister Imran Khan will deliver a keynote address to the UN General Assembly on 27th of this month ...