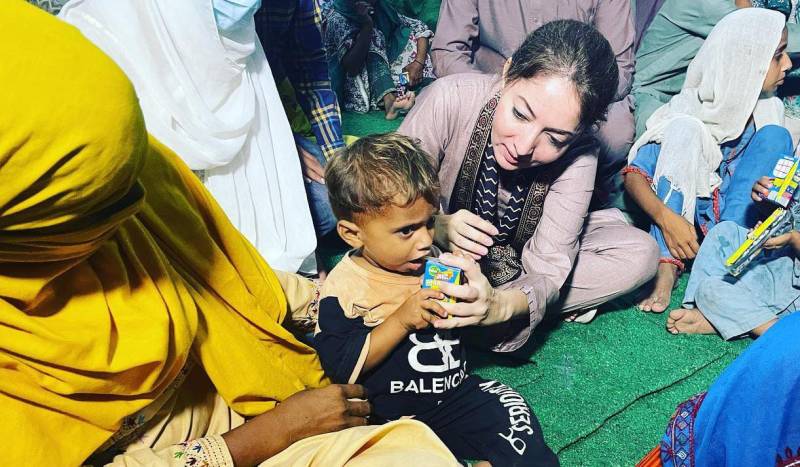 Faruqui made an exception for only one philanthropic celebrity who did more than enough on their part. The PPP leader took to social media platforms to raise awareness among people and also to highlight the fact that the showbiz industry wasn't setting a good example.

With the exception of singer Hadiqa Kiani, Faruqui showed great disapproval of celebrities who are busy in HUM TV Awards and are not doing enough for flood relief.

Taking to Instagram, Faruqui lashed out at several celebrities who are in Canada for the award show and juxtaposed their photos with Hollywood actress Angelina Jolie helping the flood victims in Pakistan.

Faruqui wrote, “Here is Angelina Jolie visiting our worst flood affected district Dadu, spreading love and hope, appealing to the international community to come for our help.” She shared pictures of Jolie’s trip to Pakistan during which she met several people affected by the floods. Jolie is the special envoy for the UN refugee committee and the UNHCR and served for 11 years as a goodwill ambassador for the committee.

She added, "Though I truly believe in cultural activities, award shows, performances etc, promoting our talent & our artists and actors are second to none. But It would have been a great support if all of them had reached out to their fellow countrymen who have lost their homes, lives & livelihood to the devastating floods. There is a time for everything, to celebrate , to mourn… we have a humanitarian crisis in our country, this is the time to stand by them, with them, to hold, support and love them. Each one of us has a responsibility towards our nation and it’s people who have given us so much. It’s payback time."

Our Pakistani celebs fly to Toronto to attend #Humawards while #AngelinaJolie visits #dadu to affirm support & love for our flood affected people. pic.twitter.com/qLpchJsE99

Affiliated with the Pakistan People's Party, Faruqui comes from a strong background and served as a member of the Provincial Assembly of Sindh from 2013 to 2018.