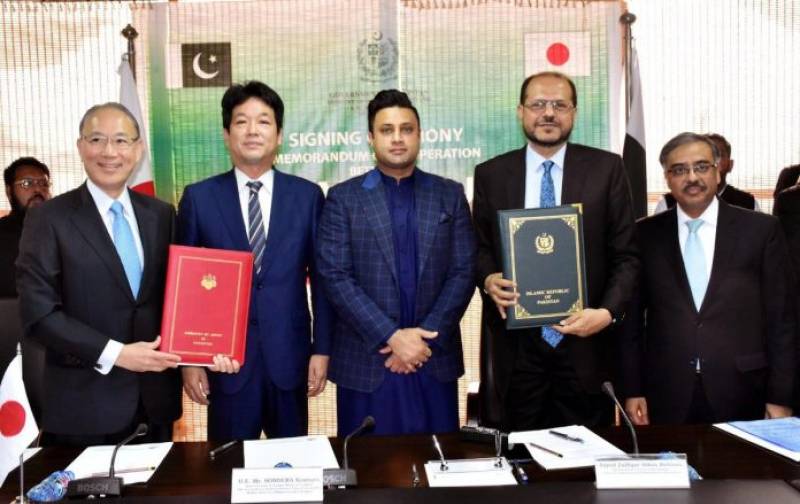 The signing of MoC will open up new avenues for Pakistanis to work in 14 Japanese sectors including construction, information technology, nursing, manufacturing, engineering and others.

“To hire Pakistani labour, we need to sign this framework with Pakistan as Japan was facing serious shortage of workers at the moment due to aging society and shrinking population,” said Japanese Ambassador to Pakistan Kuninori Matsuda.

He said Japan was creating new working visa regime as it expected to welcome upto 3,40,000 skilled workers from across the world including Pakistan.

“I always feel happy to bring good news when it comes to Japan-Pak relation but today is special as the signing of this MoC is definitely a big step in promotion of relationship between Pakistan and Japan,” the ambassador remarked.

He said this framework would not only provide job opportunities to many skilled Pakistanis but also create new vistas for robust bilateral cooperation.

Mentioning education as one of another sector where Japan would facilitate Pakistan, he said Japanese embassy in Pakistan would create a network of Japanese language programme throughout the country that would eventually help the students in pursuing their education in Japan, besides encouraging people-to- people exchanges.

Kuninori Matsuda said the framework would also provide opportunity to Japanese companies to make investments in Pakistan and vice versa.

He urged Pakistanis to learn Japanese language to get maximum employment opportunities in his country.

Secretary OP&HRD Aamir Hassan said the country, at present had sent only 1,600 Pakistani labour to Japan through Bureau of Emigration and Overseas Employment.

“Signing of this MoC would formalize export of Pakistani manpower,” he added.

He said some 96 per cent of the manpower export of Pakistan was to the Gulf countries at the moment. However, the initiative would diversify the country’s manpower export as Japan was destined to be the potential market for Pakistani workforce.

Special Assistant to the Prime Minister on OP&HRD, Sayed Zulfikar Abbas Bukhari said this was a groundbreaking movement for Pakistan and Japan as the initiative would foster relations between two countries.

“Both the countries have similar culture and sublime values, especially towards elderly” he said, hoping the atmosphere would be congenial for Pakistanis.

He said the MoC would definitely a good omen for Pakistan as its 65 per cent of population was below 35-year age.“We will provide you our best quality workforce,” he said while requesting Japanese officials to ensure optimum care for Pakistanis in their country.

He assured them that the ministry would focus on imparting Japanese language to the manpower so as to send maximum number of Pakistani labour to Japan.

The event was also attended by Foreign Secretary Sohail Mahmood, Parliamentary Secretary on OP&HRD Javeria Aheer and the officials of the foreign and overseas ministries.