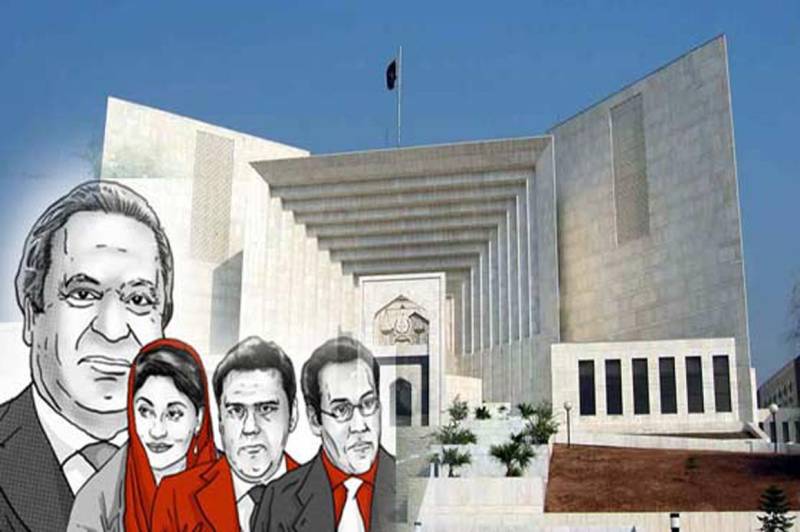 ISLAMABAD - The supreme court of Pakistan has concluded proceedings regarding the landmark Panama case here on Thursday.

The apex court has announced to deliver the verdict after investigating multiple aspects as it has reserved the judgement.

PTI's counsel Naeem Bukhari completed his arguments before the bench seeking disqualification of premier on the basis of conflicts in his statements.

Naeem started his arguments by expressing that he raised the issue of liabilities regarding Gulf steel mills yesterday. To this, justice Azmat replied that he should not waste time by repeating what he already said.

Justice Aijaz remarked that PTI's counsel wanted the apex court to deliver verdict acting as special or accountability court. He expressed that if experts issue statement before the court, it is deemed true.

Naeem expressed that he did not formulate the document bearing signatures of Maryam Nawaz.

Justice Aijaz Afzal observed that how can the court accept the controversial documents without any formal investigation.

'This is not a trial court' remarked justice Aijaz Afzal.

However, Naeem argued that the apex court did the same in case of former premier Yousaf Raza Gillani.

Justice Aijaz Afzal remarked that Gillani was punished for contempt of court adding that whether the bench should perform its duty by going above the law. He expressed that the court issued verdicts only for non-controversial facts.

Justice Khosa remarked that both the plaintiffs and respondents submitted documents which were not verified.

Naeem replied that the case was regarding premier Nawaz Sharif who concealed his assets adding that his premier did not show honesty. He argued that Nawaz Sharif did not send legal notice to Mossack Fonseca.

'Sharif family did not mention about Qatari letter for decades and so I was seeking declaration from court as it issued in Yousaf Raza Gillani case' said Naeem Bukhari.

He continued and inquired whether Panama Leaks were challenged anywhere in the world. He expressed that according to Qatari prince, he paid the loan however how that huge amount of money was transferred.

'Qatari prince acted like banks for Sharif family from 1980 to 2004' quipped Naeem Bukhari and concluded his arguments.

Awami Muslim League president Sheikh Rasheed has taken the floor for arguing before the bench.

Sheikh Rasheed expressed that he never went to school or college with that Continuity which he opted in Panama case to arrive in justice academy (court).

'My case is smart, sweet and short' said Sheikh Rasheed.

Rasheed inquired as to how Sharif family set up Dubai factory and how money was transferred abroad for the said purpose. He asserted that as many as 20 legislators were disqualified on concealing assets adding that the court has to issue final verdict to provide justice.

To this justice Khosa replied that favourable decision is dubbed as justice as judges are alleged of bribery and favouritism if the verdict does not suit any concerend party.

Attorney General of Pakistan Ashtar Ausaf winded up his arguments yesterday in front of the five-member bench. He was instructed by the apex court to assist it rather becoming a party to the case.

Ashtar Ausaf kicked off his arguments by pleading that the matter of Panama Leaks should not be co-related with Hudaibia paper mills case as the two were of different nature.

Ashtar continued that the appeal against the verdict delivered by court could be filed by anyone. However, justice Aijaz Afzal negated him and remarked that only the concerned party can file an appeal.

AGP remained adamant and maintained that anyone can file appeal against the verdict delivered by the court.

Ausaf maintained that Article 63 of the constitution prohibits declaration by the apex court. Justice Aijaz Afzal remarked that by issuing a declaration, there would be nothing left for investigations.

Ashtar Ausaf argued that the matter was regarding disqualification of member of assembly instead of Nawaz Sharif as prime minister and so disqualification reference should be submitted before the speaker of National Assembly as per the constitution. He said that if the speaker fails to decide, then the matter can be taken up by any other forum.