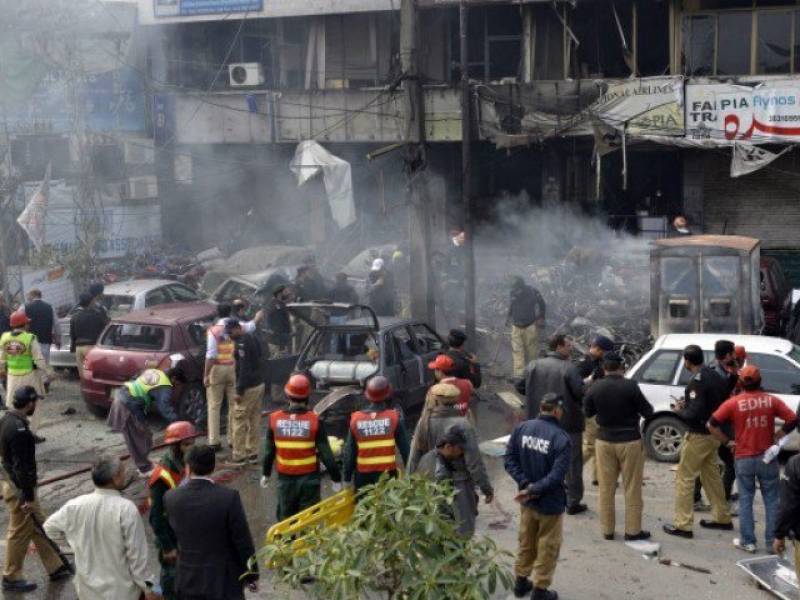 LAHORE - A spell of uncertainty and 'disinformation' ensued as the reports of blast in Lahore's Y Block of Defence area took over the media.

According to the available media reports, the blast was a 'bomb attack' and 10 kg of explosives was used in the blast. But despite the 'confirmations' from the 'credible' media outlets, each successive report refuted the previous one.

As the story evolved, officials from various government departments had a different account of the blast.

Initially, the official Twitter account of Punjab Govt claimed the explosion took place due to a generator blast.

Clarification on Lahore Y block blast: It's a generator blast and rescue team has reached the site. Please spread this.

The account later updated that the teams from Punjab Forensic Science Laboratory had reached the spot to collect the evidence, suggesting that the earlier reports were not substantiated.

“It was a bomb attack,” Nayab Haider, a spokesman for the provincial Punjab police said about the first explosion in Y Block.

However, speaking to Geo News, Provincial Law Minister Rana Sanaullah said it was still unclear if the explosion was caused by a bomb adding that other possibilities could not be ruled out. He added that none of the injured brought to the hospital had explosive burns or signs.

The site of the explosion did not have any residual explosive smell, Sanaullah added.

He further stated that most of the injured were working in the under construction building adding that many of the injured reported that they could smell something suspicious in the building.

DG Rescue 1122 Dr Rizwan also stated that the nature of the explosion was still being investigated. He added that the rescue operation had been completed.

"We suspect there might be one or two bodies still in the basement where the top floor fell," he said, adding “there is no evidence of ball bearings at the site of the blast. A forensic team is investigating and will determine the nature of the blast.”

Guessing from the damage

TV footage showed windows of several offices and eateries in the commercial area shattered by shrapnel.

Footages of shattered windscreens in cars parked nearby, as well as rubble from the damaged building strewn across the road, flooded the social media.

Social media users cried out that the nature of the blast was deliberately maintained unknown as the windscreens of cars parked over 100 feet away from the building were shattered and there was considerable damage to the cars' bodies. Residents and nearby shoppers panicked as the explosion was heard, and eyewitnesses described people evacuating buildings and running from the scene of the incident.

Many social media users were quick to point out that the blast was a direct attack on the PSL final which is going to be held in Lahore.

Stop Panama Case & PSL final in Lahore. I swear no blast will happen then.

No any blast can stop PSL in Lahore. #Shame #LanatTerroristPar

Another bomb blast at Lahore..... It's a conspiracy against PSL final, scheduled to be held at Lahore.... Everyone knows the enemy

I think bomb blast reason only to stop #PSL final in Lahore.!#LahoreBlast#indiabehindlahoreblast

As both the electronic and social media was struggling to ascertain the nature of the explosion in Defence area, another incident of the blast was reported in Gulberg, creating more panic and uncertainty.

The report initially indicated that the explosion occurred outside an international restaurant and close to a girl's college. This was followed by another series of 'confirmations' from media outlets only to be retracted later.

Heard of another blast in Lahore Gulberg. Terrorists & terrorism will b wiped out w the help of Rangers/Army/Police & people of Pakistan!

After Defence BLAST in GULBERG !!!!

Another Blast in #Lahore Gulberg😢#LahoreBlast