The Court & the Balls 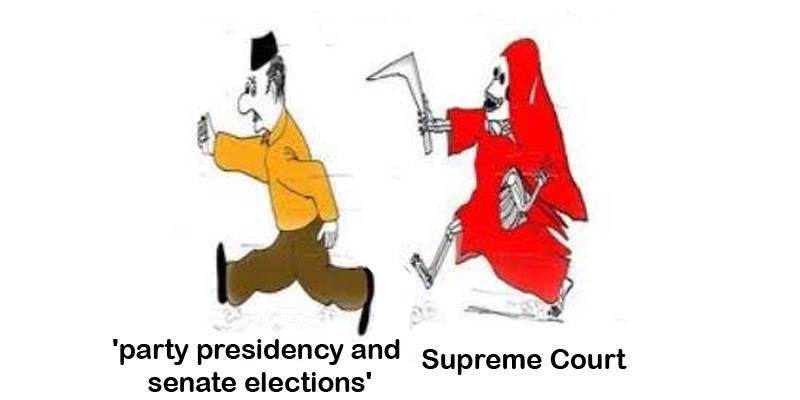 CJP’s recent Suo Motto actions and political verdicts remind of our just retired superstar Shahid Khan Afridi’s cricket, who was famous for keenness to hit and entertain than playing or winning. Or playing cricket the way cricket deserved to be played.

But cricket, I mean the test cricket not T20, is a different ball game than judicial activism. Albeit, the activism of any type is very close to T20 cricket: Gentlemen don’t play ball with either.

Our heroics, exploits, legendary inventions and improvisations in cricket – I mean with the cricket ball - aside, we have always done great in sports involving balls. The evidence is our being and remaining champions in hockey, squash, and snooker.

To top that, hockey – where one dozen sticks keep the ball rolling - is our national sport too.

We have not done great in football, volleyball, tennis, and table tennis. It's perhaps because of our comfort and particularity with the size, grip, bounce, and swing of a ball.

We don’t like balls at our feet or sports where associated balls are not in our grip or we find it hard to maneuver the balls with hands (like cricket) or sticks (like hockey and snooker).

Our uniqueness as individuals and diversity as collectivity notwithstanding, our affinity, pull, fascination, and attraction to balls that we can swing, maneuver or show off is second to none.

Indians and Americans think they too are great at that, but they know nothing.

Besides the literal mastery over certain balls, we are the champs in having a ball of a time while referring to balls in our speech, rage, love, life and petty fights.

In the first 60 years of Pakistan’s political, institutional and intimate history, only one institution had balls. That is why certain parts of this institution are referred as ‘sensitive’ and hassas.

It was in 2007 when General Kayani decided to undo the khaki monopoly over having balls and playing with them too. He egged the then CJP to try his balls. The rest is history and most of us have been a part of that hard-ball game aka Lawyers Movement.

In the last 10 years, our courts in general but CJPs, in particular, have perfected their play of balls which were in their court so well that now both the justice and courts are in their balls.

Hence, therefore, and thus our courts are not only having a ball of a time by playing ball with the erstwhile and only champions, the Army, they are also attempting reverse and late swing.

It's so heartening to see independent judiciary coming of age. From their historical, out of the boundary ball-lifting position to having their own ball is no mean achievement in just 10 years.

I am not sure if it's their passion for the balls or arty-craft, their delivery of justice seem so well rounded, and their verdicts swing and scare like our legendary fast bowlers’ fatal deliveries.

To help visualize this correlation better, just imagine and recall Sarfraz Nawaz, Imran, Wasim, and Waqar – who set the ball of our cricketing supremacy in the bowling department rolling.

Back to the courts, justice, and the balls. With the recent SC verdict, which inter alia instructs and directs that Nawaz Sharif can’t even be an admin of a WhatsApp Group, let alone President of PML-N, or a fourth time PM hopeful, a thrilling tournament has started between the colonial institutions, the democratic institutions, and the popular will.

The way this tournament is being played, tactics from hockey, cricket and snooker are morphed in such a way that it is difficult to anticipate or predict the next move.

But, no worries friends. Let us take it easy, just keep our eyes on the ball, and be entertained while the supreme balls of Pakistan are at their most entertaining mission.

Only two cautions for the players. The T-20 match ends soon, and no one takes it seriously either. The aggressive hitting however entertaining is not sustainable. Beware of the oddball of public reaction Sires.