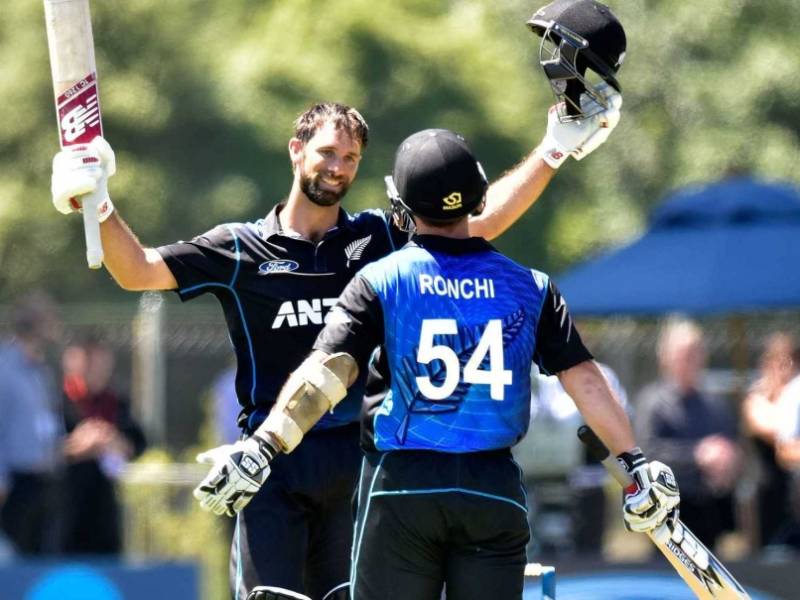 Sri Lanka had their own century-maker in Tillakaratne Dilshan and looked to be in with a chance as long as he was at the crease.

But when Dilshan fell for 116 it sparked a spectacular collapse in which Sri Lanka lost eight wickets for just 41 runs in eight overs.

The end came with more than six overs remaining as, for the second game in a row, Sri Lanka showed little fight in the lower order to let New Zealand go 3-1 up in the series.

In the fourth ODI in Nelson on Tuesday, their last six wickets were whittled out for just 31 runs.

Faced with a daunting target of 361 to win in Dunedin, Sri Lanka confidently progressed to 93 before losing their first wicket when stand-in captain Lahiru Thirimanne was removed for 45.

After Kumar Sangakkara went cheaply for nine, Mahela Jayawardene (30) joined Dilshan to lift the momentum as the tourists reached 211 in the 36th over

But the game turned when strike bowler Trent Boult was brought back into the attack with immediate success bowling Jayawardene to start the slide.

Four balls later Mitchell McClenaghan claimed the prized wicket of Dilshan and the Sri Lankan fight was over.

Dilshan had posted his 20th ODI century and the third in his past five innings in an unflustered display until he mistimed a drive on a slower delivery and was well held by Nathan McCullum at extra cover.

Boult was New Zealand's chief destroyer with four for 44 while McClenaghan, Elliott and Tim Southee took two wickets each.

Thirimanne, deputising for skipper Angelo Mathews who sat out the game with a slight calf strain, won the toss and sent New Zealand to bat with immediate reward.

On a green-tinged seaming wicket, Martin Guptill was gone first ball and the rest of the New Zealand top order followed quickly as the hosts fell to 93-5. Enter Ronchi to partner Elliott and they mounted an aggressive assault on the Sri Lankan attack.

Ronchi whacked his 170 from 99 balls, smacking nine sixes and 14 fours while setting several milestones along the way.

In addition to the world-record partnership with Elliott, his unbeaten 170 was his maiden ODI century and the highest ODI score by a number seven batsman. Elliott, who took 96 balls for his 104 -- his second century -- showed more restraint at the crease, and like Ronchi he offered few chances.

Thirimanne had the best figures for Sri Lanka with two for 36 off seven overs.