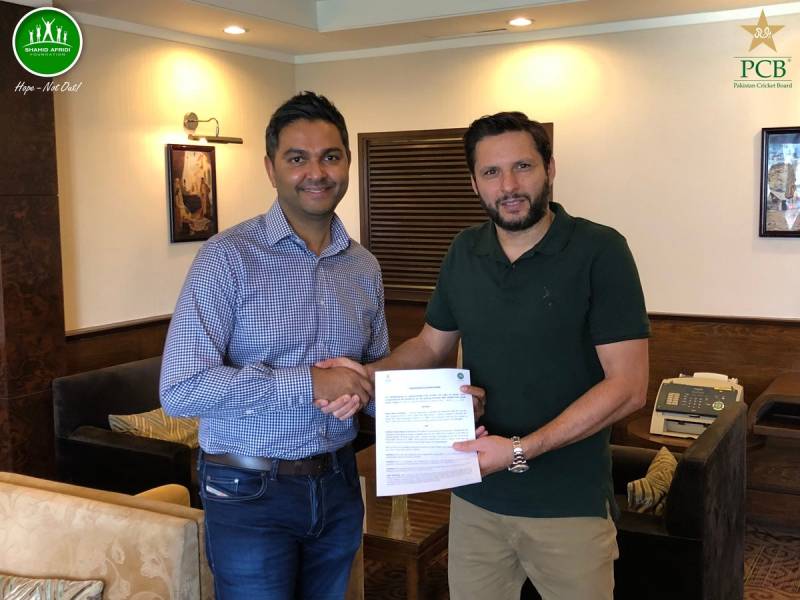 LAHORE – Pakistan Cricket Board (PCB) on Thursday extended the scope of its corporate social responsibility when they signed a two-year partnership with Shahid Afridi Foundation (SAF), one of the most respected and prestigious charity organizations, set up by an ex-player.

This follows the recent announcement of the PCB signing a three-year partnership with the British Asian Trust to shine a light on the issue of mental health in Pakistan.

The partnership with SAF will cover non-ICC events, meaning the home series against Sri Lanka will be first series when the SAF logo will feature prominently on the player kits.

The SAF was founded in 2014 with a view of improving living conditions of poor and destitute members of the society. SAF is working in the areas of Health, Education & Clean water together with the message of global peace & goodwill via sports diplomacy. SAF aims to see Pakistani people prosper, educated and healthy in the coming years.

SAF has been able to accomplish various milestones in this short span from its inception and striving for betterment and upliftment of underprivileged, poor and deprived communities of Pakistan starting with a Hospital in Kohat, SAF Schools network and several water projects in KPK & Sindh. With its global offices in several geographical regions from North America, Europe, Middle East, Africa and Asia Pacific, SAF has also helped deprived communities globally.

SAF is aiming to scale up its SAF Schools – education initiative across Pakistan to address the grassroot issues in Pakistan under “SAF Vision 2020”. This initiative has a special focus on Girls Education through the recently launched campaign and aims to educate all daughters of Pakistan by providing them access to quality education.

“I feel honored that the PCB felt my foundation worthy of their association and I am convinced this partnership with make a significant impact on our ongoing and upcoming projects." - @SAfridiOfficial on PCB-@SAFoundationN MOU signing.

Shahid Afridi, Global Chairman, Shahid Afridi Foundation, said: “I am incredibly pleased and happy to partner my former employers as we continue to take giants steps forward, this time in the field of improving and enhancing quality of lives of the Pakistanis and creating more facilities in our beloved country.

“I feel honored that the PCB felt my foundation worthy of their association and I am convinced this partnership with make a significant impact on our ongoing and upcoming projects which, in turn, will lift the quality of life in Pakistan,” he said.

“The Foundation is committed to changing the lives of people, however, whatever we do would be incomplete without love and support. The foundation works like a family, a family dedicated to providing better healthcare, education and clean drinking water to every member of society and become a ray of hope for children, youngsters and adults alike,” said Shahid Afridi.

“The PCB is a very strong brand, while cricket has the power to connect people and countries. The interest and enthusiasm expressed by the PCB in this partnership, gives me great confidence that we will be able to make impact in the next two years,” said the veteran all-rounder.

Wasim Khan, Managing Director, Pakistan Cricket Board, said: “The PCB is delighted to continue to play their part in the progress, growth and development of the under-privileged citizens of Pakistan, this time through a partnership with the Shahid Afridi Foundation.

“Shahid Afridi Foundation has done tremendous work in Pakistan in various walks of life, including education and health, and the PCB looks forward to accelerating that work by using their brand and creating more awareness within the society,” said PCB official.

LAHORE – The Pakistan Cricket Board, as part of its Corporate Social Responsibility, has announced a three-year ...

Wasim said, “It is appropriate for this partnership to kick-off with the ICC World Test Championship when Pakistan will play Sri Lanka in their opening series in September/October. The ICC World Test Championship will be played over two years and I am optimistic that when we will feature in the final in 2021, the PCB and our players will be promoting the Shahid Afridi Foundation.

“Shahid Afridi has encouraged and attracted a number of people to join him in this campaign. We have to work collectively and proactively to address the real issues in our society and work aggressively to uplift and improve the quality of lives of hundreds of under-privileged people. By raising awareness of the SAFs work, PCB will play its part in supporting this agenda,” he said.