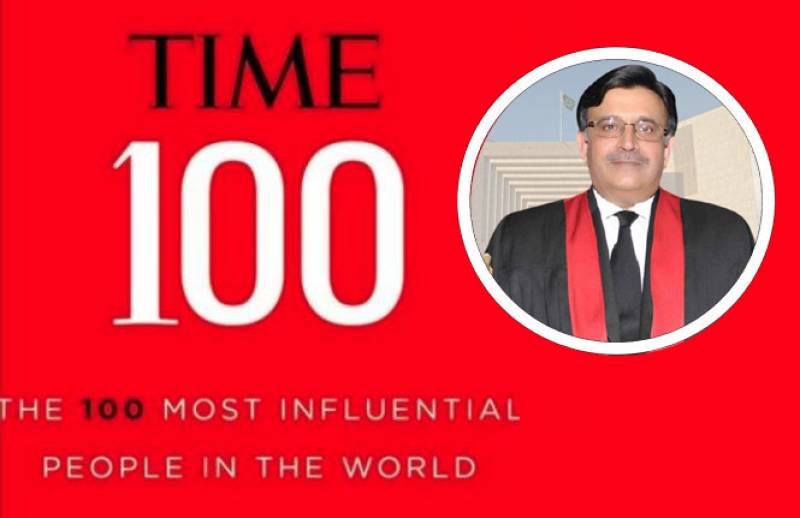 Chief Justice of Pakistan Umar Ata Bandial has been named in Time magazine's list of the world’s 100 most influential people this year.

The list, unveiled on Monday, has chosen the ‘influential people’ under six categories including artists, innovators, leaders, pioneers, icons, and titans.

Noted lawyer and PPP stalwart Aitzaz Ahsan wrote the following regarding the country’s top judge for time's 100 most influential people.

It added that CJP Bandial was widely respected for his personal integrity. The Columbia- and Cambridge--educated jurist bears the heavy mantle of not just delivering justice but also being seen to do so.

The top judge of the apex court was graduated from Columbia University, USA followed by a Law Tripos degree from Cambridge University, UK and qualified as Barrister-at-Law from Lincoln’s Inn, London.

He started his career in the year 1983 and was named Advocate of the Supreme Court of Pakistan following years of hard work. During his career, Justice Bandial has rendered judgments on a number of key public law and private law issues.

The noted personality also taught Contract Law and Torts Law at the Punjab University Law College, Lahore until 1987 and remained a member of its Graduate Studies Committee while serving as Judge Lahore High Court.

On the other hand, President of Russian President Vladimir Putin, US President Joe Biden, Ukrainian premier Volodymyr Zelenskyy, Chinese President Xi Jinping, and other leaders also made it to the annual list of Time’s magazine.

ISLAMABAD - Pakistan's Prime Minister Imran Khan has been named among the '100 Most Influential People' of 2019 by the ...