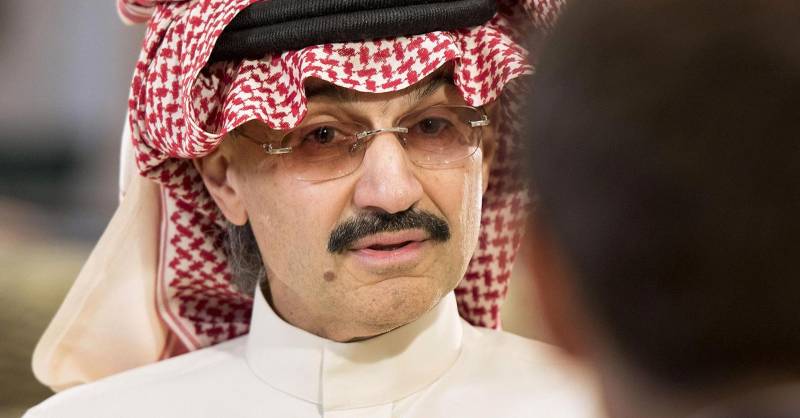 RIYADH - In a sensational set of revelations put forth by leading British media outlet Daily Mail, it has been disclosed that American mercenaries were torturing the detained Saudi princes including the billionaire Prince Alwaleed bin Talal.

Quoting a source in the country, the report said that Blackwater officials were involved in meting out severe treatment to the Saudi royals, an indication of which was hanging Waleed bin Talal upside down.

The controversial private security company, Blackwater no longer exists under that name and is now Academi, which denies a presence in Saudi Arabia and claimed it did not engage in torture, which according to them was illegal for any U.S. citizen to commit anywhere in the world.

'Constellis through Academi does not now or have we ever provided interrogative services,' they said.

'The Saudi crown prince has also confiscated more than $194 billion from the bank accounts and seized assets of those arrested' claimed the source and added that all the guards in charge were private security because Mohammed Bin Salman did not want Saudi officers to secure the Ritz-Carlton hotel.

RIYADH - The 32-year-old Mohammad bin Salman Al Saud would be assuming the charge of Saudi Arabia's king, next week, ...

'Outside the hotels where they are being detained you see the armored vehicles of the Saudi special forces. But inside, it's a private security company' added the source.

The report that has raised eyebrows of political analysts continued that the officials transferred all the guys from Abu Dhabi who were now in-charge of everything.

Another startling disclosure was that Crown Prince Salman known as MBS was conducting some of the interrogations himself.

'When it's something big he asks them questions, he speaks to them very nicely in the interrogation, and then he leaves the room, and the mercenaries go in' the source noted.

'The prisoners are slapped, insulted, hung up, tortured' the source disclosed.

The report comes on the heels of another exclusive story by the same publication suggesting that MBS would be becoming the king of Saudi Arabia in the current week.