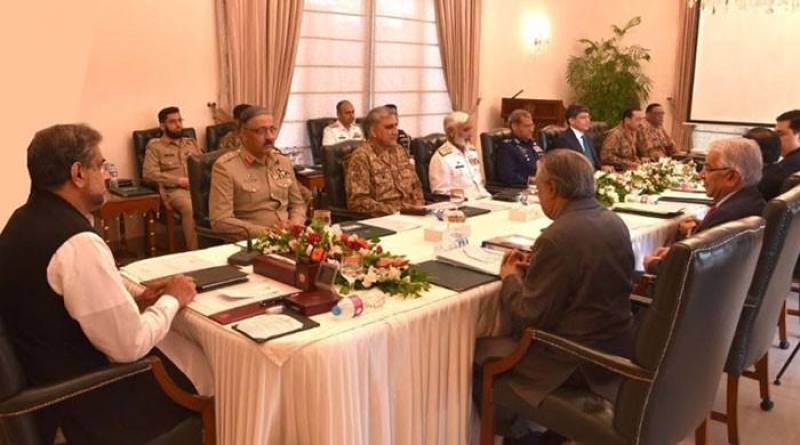 As per the details, the prime minister will took up the issue of US President Donald Trump's statement regarding putting pressure on Pakistan for allegedly giving safe havens to terror groups.

The meeting is being attended by foreign minister, interior minister, head of all armed forces and chief of joint staff of committee where a comprehensive response will be evolved regarding Trump's statement.

On Tuesday, a cabinet meeting headed by Prime Minister Shahid Khaqan Abbasi discussed the statement of Trump and expressed disappointment for ignoring sacrifices rendered by Pakistan in war on terror.

During the meeting, Prime Minister was mandated to raise the issue in the meeting of the National Security Committee for a comprehensive policy response to America.

Accusing Islamabad of harbouring “agents of chaos, violence, and terror” the tycoon-turned-president clarified his intent on Monday while announcing policy regarding South Asia to increase pressure on the country to stop any re-emergence of safe havens in order to gain regional peace, besides announcing increase of US troops in Afghanistan.

He said, “We can no longer be silent about Pakistan’s safe havens for terrorist organizations, the Taliban, and other groups that pose a threat to the region and beyond,” besides warning that Pakistan had much to lose by providing safe havens to terrorists.

In the preliminary response, Foreign Office highlighted the fact that no country in the world has done more than Pakistan to weed out terrorism.

Foreign Minister Khawaja Asif on Tuesday said Pakistan did not need of US assistance to wage war on terrorist as Pakistani nation has brought the war to a conclusive end on their own.

The US did not hailed contribution of Pakistan as it deserved, the foreign minister said, adding that the role of India, which is sponsoring state terrorism, was appreciated.

In a meeting with US Ambassador to Pakistan David Hale, Chief of Army Staff General Qamar Javed Bajwa on Wednesday said Pakistan has sacrificed a lot in the war against terrorism.

“We are not looking for any material or financial assistance from US but trust, understanding and acknowledgment of our contributions".

“Collaboration and synergy of effort all stakeholders is the key to success to bring this long drawn war in Afghanistan to its logical conclusion,” the army chief added.